The Lamb in Winter

The Lamb in Winter

Warm up with Shaanxi’s hearty mutton and flatbread soup

Each winter, when the harsh winds whistle across the dusty plains, the people of Shaanxi province know it’s time to warm up with yangrou paomo, or flatbread in mutton soup.

Finely cooked with tender bread and rich (but not greasy) mutton fat, the fragrant and hearty dish has sated many a stomach on a winter’s day, including that of the well-known foodie and poet Su Dongpo (苏东坡). “Flatbread in mutton soup is foremost in my heart out of all Shaanxi dishes,” he wrote during his exile in the 11th century.

The dish is believed to have originated from the “mutton stew (羊羹)” served in royal households as early as the Western Zhou dynasty (1046 – 771 BCE), according to the Book of Rites. At that time, nobles began partaking of mutton soup as an imperial ritual. Traditional medicine expert Li Shizhen (李时珍) once noted that mutton is beneficial for regulating the qi inside the spleen and stomach, as well as expelling cold air from the body.

Yangrou paomo first took shape during the armed rebellion against the Tang dynasty (618 – 907) led by An Lushan (安禄山) and Shi Siming (史思明) from 755 to 763. To help quell the rebellion, the Tang brought in Tajik mercenaries, who were stationed in the capital, Chang’an (now Xi’an). These soldiers were fond of eating hard naan bread moistened with mutton soup, as Chang’an was located close to the pastures and mutton trading routes in China’s northwest. As the soldiers began to interact with the locals, their cooking methods were generally embraced by commoners, especially local Muslims.

Though historically, yangrou paomo was a folk dish enjoyed by commoners, the cooking process requires precision to get the taste just right. High-quality mutton should be thinly cut and cleaned, and brought to boil with seasonings like scallion, ginger, and fennel. The bread must be “pulled, torn, pinched, and shaken” into pieces the size of soybeans, according to a new cooking standard published in 2016 by the Xi’an government.

It’s considered amateurish to stir the soup with chopsticks before eating. Shaanxi natives eat the bread close to the rim of the bowl first to preserve the delicate taste of the liquid, and end by drinking the soup to refresh the spirit.

For tourists who want to try authentic yangrou paomo, the restaurant Tong Sheng Xiang in Xi’an, founded in 1920, uses a cooking method that is listed as a national intangible cultural heritage item. Lao Sun Jia, another Xi’an restaurant, claims its flatbread and mutton soup as “the best yangrou paomo under heaven.” 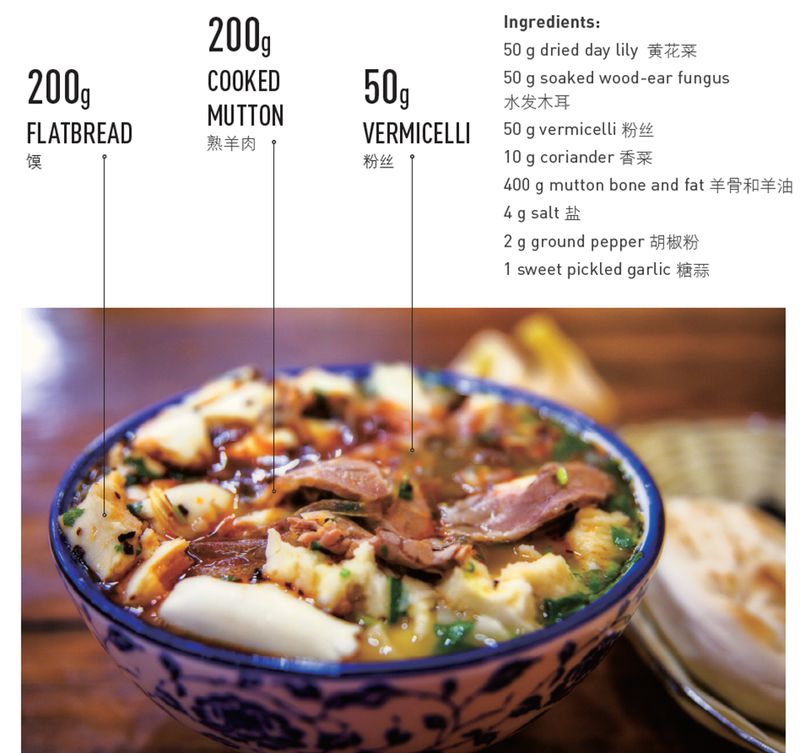 1. Tear the flatbread into small pieces

2. Wash the dried day lily and wood-ear fungus, and tear into pieces

3. Soak the vermicelli in water, until soft

4. Wash the coriander and tear it into small pieces

5. Cut the cooked mutton into thin slices and set aside

6. Boil the mutton bone and fat in water, and strain the fat; simmer the broth for two hours

7. Add the flatbread pieces to the mutton soup; season with day lily, wood-ear fungus, green garlic, and vermicelli, and heat until the soup boils

8. Season the soup with salt and ground pepper, then ladle it out into a bowl

9. Add the mutton slices to the soup, sprinkle with coriander, and serve with sweet pickled garlic on the side

The Lamb in Winter is a story from our issue, “Rural Rising.” To read the entire issue, become a subscriber and receive the full magazine. Alternatively, you can purchase the digital version from the App Store.