An ongoing crackdown by China’s Ministry of Civil Affairs and Ministry of Public Security against place names considered foreign, “weird, repetitive or self-aggrandizing” has been getting called quite a few names itself.

The most recent critic has been Southern Weekend journalist Shen Hexi, who last week penned a lengthy article that argued, among other things, that names not only identify places but convey their historical significance; changing them can cause “personal and social memory breaks.” 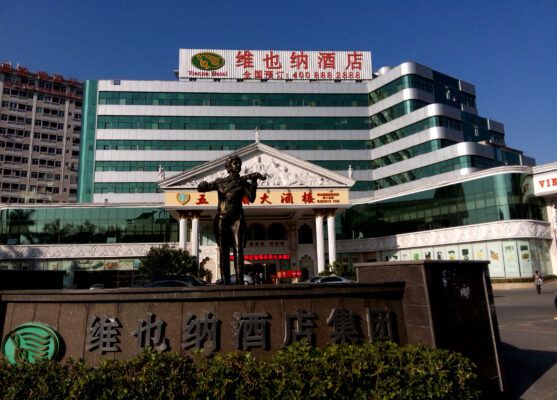 Others, Shen points out, have already called the campaign a one-size-fits-all approach, a form of nationalist overkill that’s reminiscent of the “name rectification” campaigns of old.  To many businesses like the Vienna Hotels group, though, it’s simply a violation of trademark rights.

The hotel chain was among After finding 15 of its 2,500 properties on a list of 84 buildings, bridges, and roads singled out by Hainan’s Civil Affairs Department for having names “worshipping of and having blind faith in foreign things.” These included such properties as Heidelberg Residency and Californian Sunshine. For Vienna, though, whose brand has been a registered trademark since 2012, the campaign is “trampling” China’s trademark law, as business names “cannot be decided by personal preference.”

Unfortunately, the company faces a broader government stance against “Big, Weird, Foreign” names that has already seen a slew of diktats aimed at instituting standards in business practices, appearances and nomenclature. At the time of writing, seven other provinces and regions besides—Shandong, Fujian, Zhejiang, Sichuan, Shanxi, Shaanxi, Jiangsu, and Ningxia—have declared war on weird names.

In 2017, the State Administration for Industry and Commerce placed restrictions on registering “long and weird” names; in 2018, Beijing launched a controversial citywide campaign of removing signs from the tops and sides of buildings to “illuminate Beijing’s skyline,” which received similar legal pushback.

In fact, the State Council first issued Regulations on the Management of Geographical Names as far back as 1986, but it was not until 2016 that Ministry of Civil Affairs introduced measures intended to preserve geographical names, and rectify their “irregular” use, specifically with regard to residential areas.

It’s common practice for property developers to assign exotic names to otherwise ordinary complexes, from “Palace Gardens” to “Palm Springs” to Wenzhou’s “European City” (欧洲城), which faces a name-change into the less glamorous “Low Stool Bridge.” The southern Zhejiang city has a history of forcing developers to shape up. In 2010, several projects had to rename themselves at registration, such as Zhongrui Manhattan (中瑞曼哈顿), which became Zhongrui “Manha Tun” (曼哈屯, using the character for an ancient military garrison or village). Wenzhou also stipulated rules about the future naming of properties, requiring “gardens” to devote at least 40 percent of their area to greenery, and “wetlands” to provide a body of water.

Shen interviewed historical geographer and Fudan University professor Ge Gexiong, who argued that, regardless of its origin, a “name is part of the cultural heritage of a place and…the collective memory of people living in that place.” Jiangning Road in Shanghai, for example, was once known as Gordon Road in gratitude to the British general who helped suppress the Taiping Rebellion against the Qing. Ge supported the regulations on place names, but emphasized the need for clear rules, procedures, expertise, and (ironically) standards that take potential economic or historical losses into account.

While the campaign will mostly be a headache for real-estate marketing departments, sudden name changes are likely only to cause further confusion. Even the Ministry of Civil Affairs has warned that some authorities have been taking things too far. As one hotel consultant told the South China Morning Post, the campaign is ultimately about government bureaus wanting to “avoid approving names that undermine China’s cultural confidence”—and that’s a campaign with no end in sight.