There’s a traditional saying in Mongolian: “A Mongol without a horse is like a bird without wings.” There’s no better place to see this idea in action than Naadam (那达慕 Nàdámù), the three-day celebration of Mongolian manhood that takes place each year across the region’s grasslands. Though the largest festivities take place in the Mongolian capital Ulaanbaatar, Naadam has also been revived in Inner Mongolia as a celebration of ethnic culture and is still held on its traditional lunar calendar date, which typically falls in July. If thundering hoof beats, whistling arrow shafts and burly, oiled-up men set your pulse racing, this is the place for you.

Naadam showcases the most popular sports of steppe civilization: wrestling, horse racing and archery. In the Mongolian language, Naadam means “games” or “entertainment,” and is short for Eriin Gurvan Naadam, meaning the “Three Manly Games.”

It is, affirms Paul Cuclis who attended last year’s festival, an appropriate name. “Basically, the entire festival has this totally testosterone-infused atmosphere,” he says. “You have giant men clashing, archers shooting hundreds of meters and even little kids racing horses to exhaustion and sometimes even death.” 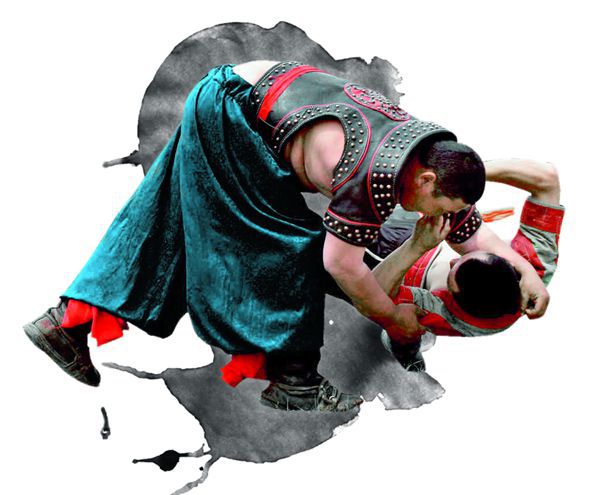 The celebration can be traced back to the days of Genghis Khan, the fearsome 12th-century leader who consolidated the Mongol hordes and conquered the Eurasian continent. As legend has it, before the Great Khan led his troops out of Inner Asia, he summoned the tribes for a grand meet and military review. Archery skills were the first to be tested, while wrestling and horse-racing were added later during the Yuan Dynasty (1206 – 1368), establishing Naadam as a military-focused sports competition.

While archery is the oldest competition, nothing evokes the martial glory of 12th century Mongolian warriors better than the unadulterated brawn of Mongolian wrestling. It’s the first event of the festival, and follows extended bouts of singing, praying and dancing. Wrestlers perform eagle-dances as they come into the arena, which are perhaps best envisioned as similar to the elaborate rituals performed before a sumo competition in Japan.

Attired in leather boots, tight-fitting briefs, an open-fronted, long-sleeved jacket and the pointy-tipped Mongolian hat, they then attempt to hurl each other to the ground. The loser is the one whose elbows or upper body touch the ground first. Competing with no weight divisions and no time limit, wrestlers win titles of titan, lion, garuda, elephant and falcon, which reflect how many rounds they win.

Mongolians joke that their children ride before walking. This is apparent in the horse races, where jockeys are typically children between the ages of five and 13. “Anywhere else these kids would be on playgrounds, but here they’re literally risking their lives for a national pastime,” says Cuclis. “Many don’t even use saddles, and some don’t hold on with their hands either since they have a whip in both hands.”

Despite the risk, the focal point of the races is not the riders, but the skill and endurance of the horses. While the winning jockey is called the “leader of ten thousands,” the horses are the center of attention. Even the losing mounts get a little something: a serenade to wish it better luck next year.

“The Three Manly Games” is a story from our issue, “Adventure Issue”. To read the entire issue, become a subscriber and receive the full magazine. Alternatively, you can purchase the digital version from the iTunes Store.

David Green is a contributing writer at The World of Chinese.