My hotelier seemed baffled. It wasn’t that his small hotel had attracted a foreign tourist over Chinese New Year (“I have many people coming to my place,” he boasted). His surprise was the reason for my visit—the UNESCO World Heritage Site nearby.

Zunyi, a small city in northern Guizhou province, earned this status in 2015 for what remains of Hailongtun (海龙屯 or “Sea Dragon Castle”), an unusual fortress built in the 13th century by a local chief of possibly mixed Han, Miao, and Gelao ethnicity. Yet most visitors to this remote area are drawn to its relatively recent Communist history. “Every single one of my guests visits the Zunyi Conference site,” reckoned the flustered hotel owner, referring to the location of a crucial 1935 party meeting. “Only 10 percent make the excursion to Hailongtun.”

Then again, I was the only guest that night—meaning he was 90 percent wrong. I’d flown in over a spectacle of Spring Festival fireworks to land at a former People’s Liberation Army Air Force base almost 40 kilometers outside Zunyi, where the cab drivers easily outnumbered passengers.

The ancient fortress was only accessible through one path

A lonely drive took me past the usual signs of a regional building boom (new roads, skeletal apartment complexes) before we arrived at the hilly city center. In contrast to the comfortably sparse suburbs, the old center of Zunyi is a conurbation of 1980s office towers and apartments in a valley crossed by the Laba River, surrounded by hills and sugarloaf mountains. The 10-storey hotel was one of a clutch of buildings squeezed onto the hillside, separated by a maze of alleyways so narrow that residents could almost shake hands through the windows with the neighbors living across.

It’s hard to believe that this unremarkable city used to be the headquarters of a rebellious local government. During the Yuan, Ming and Qing dynasties, parts of China were under the control of regional chieftains, called tusi (土司). These hereditary rulers, often ethnic minorities, provided troops, suppressed local rebellions, and paid tribute to the emperor, in exchange for governing the local populace and building lavish symbols to their military prowess, like Hailongtun.

The tusi ruling Zunyi, or Bozhou as it was called back in the day, were believed to have built Hailongtun in 1257, when the ruling Southern Song dynasty was keen to protect its western border from the Mongols who had just conquered the tributary Dali Kingdom in nearby Yunnan. In less than 20 years, the Mongols overran the Song. The Yang family, who had ruled Bozhou since the 9th century, simply changed patron and kept adding to their fortress. 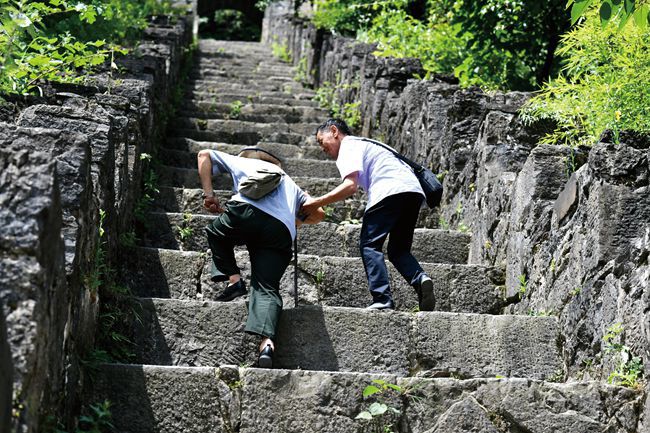 It’s a breakaway part of Chinese history that’s barely known to the outside world—but neither, really, is the Zunyi Conference site, unless you’re a student of “red” history. In January 1935, as the Red Army passed through on its Long March, Mao Zedong was elected to the Communist Party’s leadership. The graceful red-bricked villa where the pivotal meeting was held—the former residence of a local warlord—is free to visit year-round, and has become so iconic to the city that its silhouette adorns every local taxi’s sign.

“Red tourism” has become popular, particularly with older Chinese, and revolutionary sites around the country have developed facilities to match—by 2016, more than 33,000 of sites had hosted 1.147 billion trips, according to the China Tourism Academy.

Often, they’re so over-developed that one wonders what Communist forebears would have made of it at all: At 8 a.m. the next morning, minutes from my hotel, a line was already forming at the Zunyi Conference Site, where rows of souvenir vendors hawked red memorabilia. Nearby in Zunyi’s Old Town, diners under reconstructed tile awnings consumed the local breakfast—noodles topped with tofu pudding, or hot-and-sour lamb vermicelli.

I hurried past the smell of chili oil and pickled peppers to hop on an aging public bus. On the first day of the lunar calendar, it was crammed with families visiting the cemetery on the outskirts of town to burn incense and leave offerings of cigarettes, alcohol, and food. 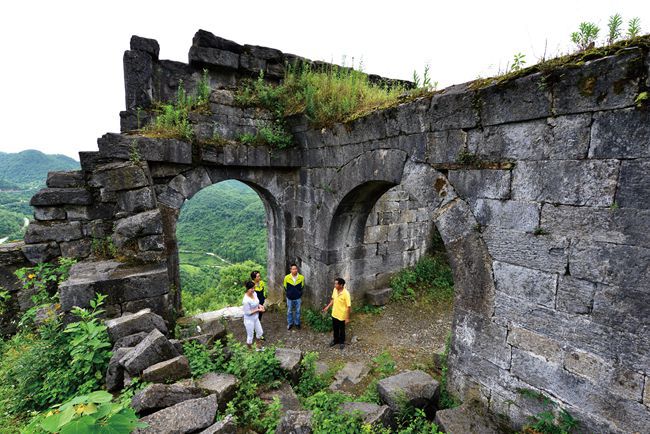 Hailongtun is atop a hill in Bozhou county 28 kilometers away. The winding roads, however, double the distance, as the bus twisted above karst valleys and sheer drops to the rushing rivers below. Surrounded by cliffs, protected by six kilometers of high walls and nine garrisons, the fortress dominates its surroundings at more than 1,300 meters above sea level; it would have been formidable to scale in the best of conditions.

Certainly, the former occupants felt they had little to fear from either surrounding fiefdoms or the central empire. Historians have multiple theories for how relations soured with Beijing at the end of the 16th century, but according to one explanation, the trigger was when the tenants of Hailongtun began to loot the neighboring states as part of skirmishes among the local tusi.

As the ruling Ming court was warring with Japan on the Korean Peninsula at the time, it could scantly afford such discord, and summoned the tusi of Hailongtun, Yang Yinglong, to stand trial in the capital. Instead, Yang refused, and repelled the first contingent of Ming troops sent to punish him.

In 1600, though, a second attack forced the chieftain to retreat inside Hailongtun’s walls. In those days, the fortress was not only a military garrison, but a self-sufficient town with a palace, government offices, living quarters for artisans, handicraft workshops, ancestral temples, wells, a clinic, and even a jail. Its architecture reflected the diversity of the region, with Gelao-style “stilt houses” alongside structures more typical of the Han, Miao, and Tujia. 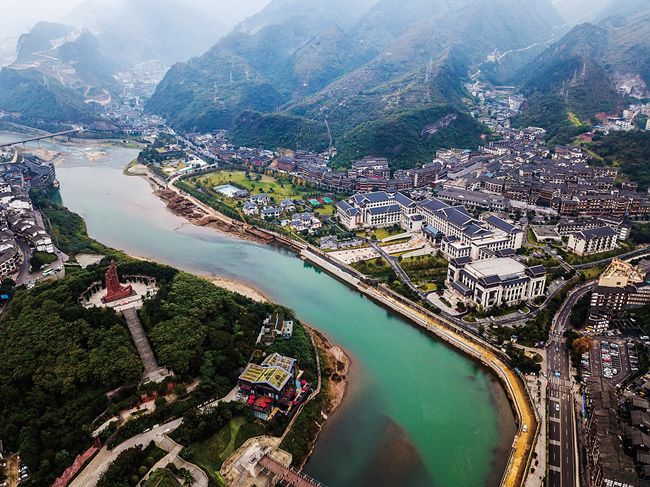 Today, only the stone walls, steps, and foundations of the five-square kilometer complex remain, although the first sight that greets tourists behind a huge parking lot full of vendors is “Hailongtun Lower Town,” a modern complex of shops and restaurants that supposedly recreates the medieval town that stood here more than four centuries ago. Generic red lanterns and suspiciously well-kept masonry instead give it the character of a movie set. A trickle of visitors had already come to spend the afternoon at the family-friendly complex, which includes a cinema and a small museum about tusi life.

Leaving this Disneyfied Hailongtun, travelers can take a shuttle bus uphill to the base of the fortress. From there, it’s a climb of nearly 400 meters via massive stone stairs, including the infamous “Heavenly Ladder” to Flying Tiger Pass—a nearly vertical stairway of 52 meters and only 36 steps, some nearly a meter tall.

It was hard to imagine making such a journey while being weighed down by the weapons and armor of a Ming soldier—though actually, the mammoth steps were designed for horses, as were the towering arches of the mountain gates that rise out of the jungle one after another, leading from the single entrance at the mountain’s base to the tusi’s inner sanctum. A longer route takes visitors past the relics of an irrigation system, a ranch that could accommodate 10,000 steeds, and three layers of towers and passes that made Hailongtun one of the most impregnable places in ancient China.

In 1600, after the last tusi retreated behind its walls, the Ming army laid siege to Hailongtun for 114 days. Thousands of imperial foot-soldiers died attempting to scale the single stairway; their corpses simply dropped to the bottom of the steps, a local guide picturesquely told China Daily in 2009. When their cannons barely made dents in Hailongtun’s masonry, the Ming decided to rappel up the perpendicular cliff at the rear of Flying Tiger Pass—a feat that was thought to be impossible. 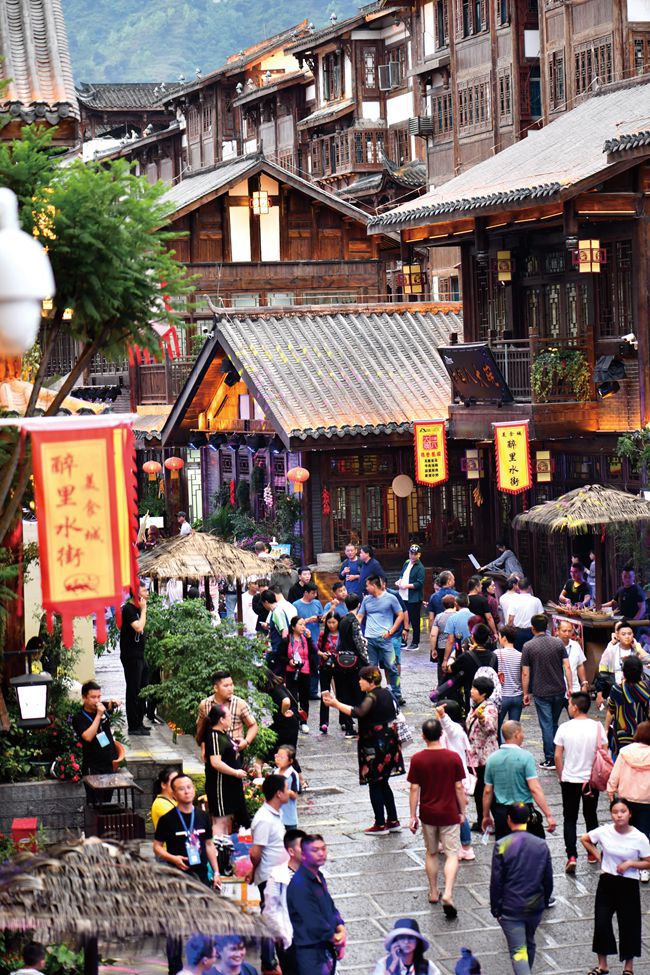 Street scene from a town in Zunyi prefecture

As Yang’s defenses fell, Hailongtun’s last tusi committed suicide inside his castle with two concubines. The Ming burned down the fortress, and executed the rest of Yang’s 22,000 subjects, including women and children, tossing their bodies down a precipice now marked by a stone tablet that reads “The Killing Ravine.” Local lore states that the river ran red all the way to Zunyi with the blood of the executed, whose phantom wailing can still be heard in the gully today.

After its destruction, Hailongtun was never again used for military purposes, but a monastery was built in 1603 to appease the souls of the dead. Excavations have taken place since 1999, but the vast majority of the area remains covered by thick bush, protecting still more secrets of the tusi’s rule and its sudden decline.

Today, at 1,000 meters above sea level, the Killing Ravine is simply a stunning vista of the conifer-covered hills and rivers below; the blue sky and breeze spells nothing more sinister than a hike through one of China’s more geographically unique regions. Flying Tiger Pass, too, isn’t stormed by vengeful armies anymore, but by hundreds of out-of-breath tourists and participants of Guizhou’s annual International Mountain Outdoor Sports Challenge. This three-day decathlon takes place across Hailongtun and the province’s other heritage sites, and includes local ingredients like paddling a rubber raft, or running with a traditional bamboo basket strapped to one’s back.

Still, as I reached the top at the end of a half-hour hike, the occasional sound of New Year firecrackers in the villages below bore disquieting echoes of the violent past. UNESCO has identified Hailongtun, along with two tusi sites in Hunan and Hubei provinces, as places that “bear exceptional testimony to this form of governance.”

However, mainstream Chinese history focuses on dynastic succession and clear cycles of unity or disunity, leaving little room for the dynamics of rebellion and compromise at the edges of the empire. Was that why so many tourists preferred digesting their heritage alongside local snacks in the parking lot—or were they simply deterred by the hundreds of stairs?

This ambivalent position was best captured by Yang Yinglong himself, in a couplet he left carved on the fortress: “On top of Hailongtun, half an emperor sits above the world.” It’s an appropriate epitaph for a history—and site—that still seems to be understood to no one, and fits in nowhere.

Fort Besieged is a story from our issue, “Funny Business.” To read the entire issue, become a subscriber and receive the full magazine. Alternatively, you can purchase the digital version from the App Store.

Aladin Farré is the founder and host of Middle Earth Podcast and a contributing writer at The World of Chinese.