It’s not always easy being a child. For much of Chinese history, children were put to work toiling the fields with their parents, while education was limited to the offspring of the nobility.

Though things are easier today, many parent still hope their children will provide for them when they get old. Families prize their child’s education and want to capitalize on their artistic talents. Stories of child prodigies from ancient times are still popular and told in the hope that one’s own children might replicate the achievements of kids past. These hopes placed on youngsters have inspired many chengyu to describe children and childhood:

“天真” (tianzhen) used by itself isn’t always a positive adjective, sometimes emphasizing one’s immaturity or naivete. But this chengyu, 天真烂漫, celebrates the innocence of children and is always a compliment. It can be used to describe children or child-like adults.

What an innocent and guileless girl!

This chengyu, invoking the strength and intelligence of a tiger, is used to describes a strong, healthy, and good-natured child:

This kid is so strong and good-natured, how lovely.

In ancient times, boys aged between 8 and 14 would have their hair styled into two knots. That haircut was called 总角, and later the term came to refer boys in this age group. So, this chengyu can be translated as “childhood friends.” 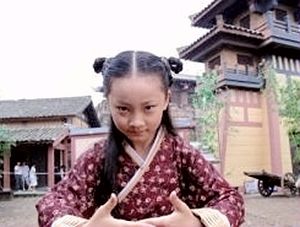 No one could have known that the two childhood friends would become deadly foes.

This chengyu refers to childhood friendship between a boy and a girl. A bamboo horse is a traditional toy shaped like a horse’s head attached to a bamboo rod, which children can pretend to ride. During the Tang dynasty (618-907) poet Li Bai wrote: “郎骑竹马来，绕床弄青梅” (“On bamboo horseback came the lad, circling around the well hedge, and plucking up green plums for his maid.”). The bamboo horse and green plum in Li’s poem became used to refer to a close friendship between a boy and a girl.

The following line of the poem “同居长干里，两小无嫌猜” (“We lived near together on a lane in Ch’ang-kan, both of us were innocent in our childhood.”) inspired another chengyu, 两小无猜, with a similar meaning.

I’ve known her since my we were young. I didn’t expect that she would be my wife one day!

Also written as 黄口孺子(huángkǒu rúzǐ), this derogatory chengyu refers to the ignorance of youth. 黄口, literally “yellow mouth,” described the color of baby birds, here used as a metaphor for little kids:

What do you know, you ignorant youth! You don’t have any place in this conversation!

No one is free from misfortune or mishap in life, including the young. This chengyu describes children who suffer from frequent ailments or diseases.

This child has suffered one ailment after another. It’s really great to see him grow up.

Losing a parent is one of the worst such calamities that could befall a child. In ancient Chinese, 孤 (gū) refers to someone whose father had died.  尺 (chǐ) was a unit of length used in ancient times—六尺 (six chi) was about 1.44 meters, around the height of a child. Thus, 六尺之孤 (liù chǐ zhī gū) refers to children who lost their father at a young age.

According to The Analects of Confucius, Zeng Shen, a famous disciple of Confucius, described a 君子(jūnzǐ, gentleman) as being a person “to whom you can entrust your young child and the affairs of the entire state (可以托六尺之孤，可以寄百里之命)”  after you die. Maybe your 总角之交 or 青梅竹马 would be good choice.