Despite their bad rap, rodents feature in many folk tales and regional celebrations across China

“Voles, voles in the field/ Don’t eat the crops our labor’s yields/ Three years now we’ve let you be/ But never have you thought of me (硕鼠硕鼠，无食我黍！三岁贯女，莫我肯顾。)”: This famous verse in the ancient Book of Songs (《诗经》), featuring poems and ballads from the 11th to 6th century BCE, expresses a long-standing hatred of rodents in Chinese culture.

Despite being the first animal in the Chinese zodiac, the rat or mouse, both known as “shǔ(鼠)”, is detrimental to any farming society. Though tiny in size, it seems to be voracious in appetite, gnawing on grains, farming equipment, and furniture alike (actually, rodents gnaw on hard objects because their front teeth never stop growing—if they didn’t continue wearing their teeth down, they would no longer be able to open their mouth, and would starve to death).

These real-life struggles with rodents also gave rise to a lot of symbolic disdain, with many idioms and proverbs comparing cunning and untrustworthy people to rats. Yet rodent rituals are not all bad: In many parts of China, rats are actually incorporated into traditional celebrations and other folk customs that acknowledge rodents as an essential part of life, as they are a part of the Spring Festival: 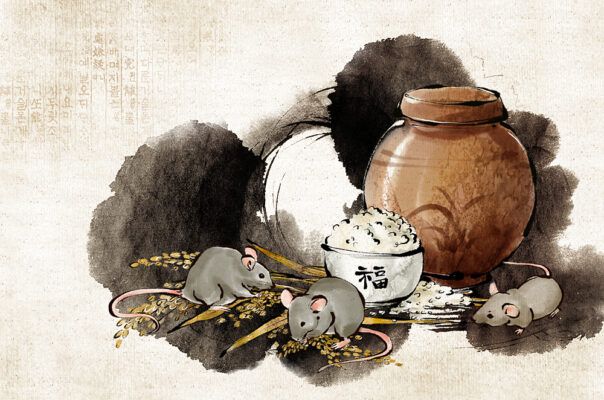 There have been many explanations offered for why rats are known as “hào zi (耗子)” in colloquial Chinese. Some claim the that “耗” and “鼠” were pronounced similarly in ancient Chinese or regional dialects.

However, a well-known legend traces the name to the Five Dynasties period, when China was fractured into several warring kingdoms, and rulers extorted wealth and imposed many eccentric rules on civilians. The Old History of Five Dynasties on Food and Currency (《旧五代史·食货志》), a book written in the Northern Song dynasty, mentions a decree called “Sparrow and Rodent Consumption” (雀鼠耗), which was a tax that civilians had to pay to reimburse the government on any grains that are eaten up by pests while being transported to the capital. Disgruntled civilians, who could not openly grumble about their oppression, began to also refer to rats as 耗, or “consumption.”

Rats also play a role in some regional celebrations of the Spring Festival, and not only during their namesake year. While the first day in the lunar year is an occasion for joy, marked by red lanterns hanging high on the roof and the Spring Festival couplets posted on every door, the festivities are much quieter in the third day of the holiday (初三), also known as “xiáo nián cháo (小年朝)” or “Heaven’s Festival” (天庆日).”

On this day, people traditionally turned off all lights and went to bed early. There are also different explanations for this custom. One legend states that that this is the day that rats get married, and families had to sleep early in order not to disrupt their weddings.

Some families also sprinkled grains on the floor before they go to sleep, a practice called “lǎo shǔ fēn qián (老鼠分钱),” which symbolized sharing the harvest with rats in return for their promise not to eat up all their yields (a more gruesome version of this story asserts that people historically poisoned the food they left out for the rats, disguising pest control as a folk custom). 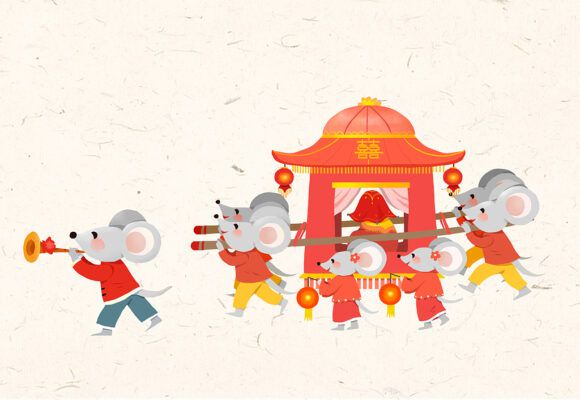 The custom of the rats’ wedding is generally called “lǎo shǔ jià qīn (老鼠嫁亲)” or “lǎo shǔ qǔ qīn (老鼠娶亲),” and it is celebrated in many places throughout China. In south China’s Jiang’nan (south of the Yangtze River) region, it’s believed that marrying off an “unlucky”  creature to another family would secure one’s prosperity for the coming year. In Shanghai on the 16th day in the lunar new year, people traditionally made sesame candy as symbolic wedding favors for rats.

In Northern China, on the other hand, people ate two snacks made with flour, “rats’ claw (老鼠爪爪)” and “scorpion tail (蝎子尾巴),” on the 25th day of the first lunar month. Eating “rats’ claw” is supposed to ensure that rats’ claw will itch and they , while eating “scorpion tail” ensures that scorpions won’t interfere with the rats’ weddings.

Though rats are generally considered unlucky, New Year paintings and paper-cutting featuring rats’ wedding are auspicious omens. And contrary to the many literary works that describe rats as negatives, they are vividly and energetically depicted under the paintbrush of well-known ink artist Qi Baishi (齐白石).

Though Qi is best known for painting shrimps, one of his most famous works is The Mouse and the Oil Lamp (《老鼠与油灯火》), in which depicts a smart and resourceful mouse trying to steal oil. In another painting, images of rodents gnawing on vegetables are paired with the character 丰, for abundance, implying that rats are attracted by prosperity. As with the controversial animal itself, let’s take the bad along with the good in this Year of the Rat, and wish each other “鼠(属)你好运 (shǔ nǐ hǎo yùn, may good luck belong to you)!” 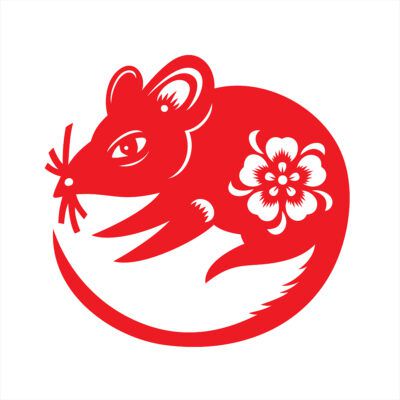