For some communities in Beijing, controlling the coronavirus outbreak means barring renters from their own homes

Cui Yuan is used to calling her family with updates when she travels, and last Saturday was no exception. On reaching her apartment complex in Beijing, she instinctively dialed her father to let him know she was home safe and sound, or bao ping’an (报平安).

The only problem was, it wasn’t true: The 24-year-old from Guizhou province had arrived at her complex to find barricades outside the gates, and uniformed security guards pointing all tenants arriving from outside of Beijing to a hotel down the road, with instructions to report back with their temperature after 14 days, the believed maximum incubation period of the novel coronavirus.

“I had to control my anger to let my father know I was all right,” Cui tells TWOC. “Actually, my parents told me not to go back to Beijing just yet, but I thought if I had to quarantine myself before going back to work, I might as well do it in my own apartment—I didn’t know I wouldn’t even be able to get in.”

At a press conference on January 31, Zhao Jigui, deputy head of Beijing’s Civil Affairs Bureau, stated that those returning to the capital from other cities should be allowed to “freely enter” their residences if they show no symptoms of infection, provided they continue to wear masks and have their temperature checked.

The statement came in response to overzealous residential and village committees that were putting out blanket bans on any non-locals in their community in a panicked attempt to control the coronavirus outbreak.

As of press time, though, Cui is still unable to return home. “I’m staying with my boss—isn’t that thrilling?” she asks self-deprecatingly. Cui has since been calling the municipal government’s non-emergency 12345 hotline (“They say they’ll report the problem to the relevant authorities”), and joined the “Beijing Returnee Solidarity Group,” a WeChat group of nearly 400 members who maintain a crowdsourced list of the rules for entry at the city’s various residential communities.

The problem is not restricted to Beijing—social media users report encountering similar rules in communities in Zhengzhou and Xi’an—but appears to be most prevalent in the capital due to the sheer size of the city’s “external” population: According to figures from the Party School of the Beijing Municipal Committee of the CPC, as of 2018, the city boasted more than 7.6 million “permanent external residents” without a local household registration.

On January 28, Beijing’s municipal government issued a notice to all districts to step up disease prevention and control efforts as residents prepared to return to the city after the Spring Festival holiday.

Residents of many complexes in Beijing must register before returning home

Around the city, apartment complexes have reduced the number of open entrances and posted volunteers or security guards at gates, checking the temperature of everyone who enters, and recording their travel itinerary and contact information. Many have barred non-residents from entering, requiring even couriers and food delivery workers to leave their goods outside.

Other communities have taken more extreme measures. The list compiled by the WeChat group shows residential complexes and suburban villages that are turning away all renters (and in rare cases, owners) arriving from other cities without a health check from a major hospital, a signature from their landlord, a police-issued residence permit, or proof of 14-days’ quarantine from a hotel—or in some cases, without offering any solution at all.

Many of these incidents have been reported from so-called “urban villages” on the outskirts of Beijing where urban and rural modes of law enforcement collide. “I called [the emergency police number] 110, and they told me they couldn’t do anything, because villages have the right to self-govern,” Zhang Xin, a tenant from Henan province who had a five-hour standoff with village committee members just meters from his apartment in the suburban Changping district.

“Villager self-governance,” or cunmin zizhi (村民自治), is a protected right under China’s 1982 constitutional law. Under this system, Chinese villagers can elect and supervise village-level leaders, run their own economies, and create regulations within the boundaries of the nation’s laws.

However, as Wuhan University constitutional law expert Qin Qianhong told the Southern People Weekly magazine, self-governance cannot infringe on other rights. “For example, basic property rights, and the right to liberty, life, and health are its boundaries.”

Moreover, he opined that emergency measures should be established by the national, provincial, or municipal-level government, “not [by] lower-level organizations, using the ‘state of emergency’ as an excuse to take arbitrary and excessive measures.” 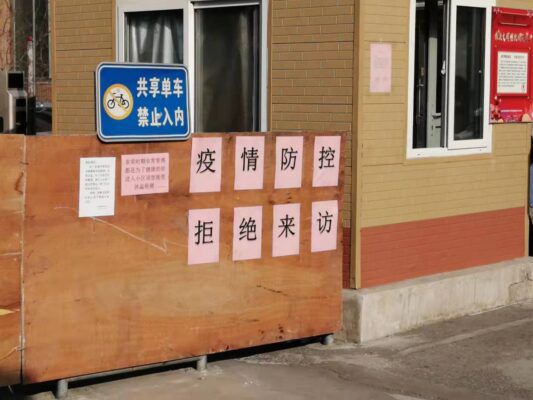 A representative from the committee overseeing Dongsanqi, the village where Zhang is a tenant, maintains to TWOC that the suburban community has no regulations that are not consistent with national recommendations, and no one who legally rents an apartment in the village is barred from entering if they have their landlord’s consent.

The committee declined to comment about their right to “self-govern.” Calls to the government of Beiqijia, the town that allegedly issued a notice closing all villages under its jurisdiction to non-local residents, went unanswered.

Zhang believes a lack of clear dos-and-don’ts from the municipal government and a lack of local enforcement are both to blame. Though his landlord had warned about the restrictions and advised him to delay his return, Zhang nonetheless set off for Beijing on February 1 after seeing the Civil Affairs Bureau’s statement on returnees’ right to free access.

“When I told my village committee to look up the statement, they said they don’t see it, and they can make their own rules,” fumes Zhang, who estimates that during the hours he waited, a dozen other tenants were turned away, all of whom called the police to no avail. “I said I’ll read it out loud to them, and they said they couldn’t hear me.”

After spending the night with a friend, Zhang was able to reach his landlord, who got permission for him to enter the next day by signing a guarantee that his tenant will not leave his room, that he will report his tenant’s temperature twice a day, and that he will provide medical supplies, food, and trash disposal services to his tenant during a 14-day quarantine period. 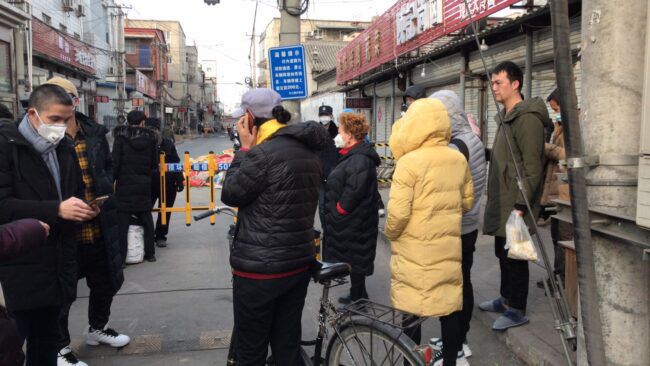 At the time of writing, other tenants in the WeChat group have reported reaching similar compromises, though an equal number report being unable to reach their landlords or getting them to agree to the extensive terms.

Besides the inflexibility of regulations, tenants express disappointment with how they’ve been treated by local officials. Some are staying in hotels at their own expense or their employers’, while others, worried about exposure to the virus in public places, are staying with friends in the city.

A handful have returned to their hometown: Yan Jin, a tenant who arrived from Shanxi province on February 2, is one. She says village residents had set up roadblocks to her apartment in western Changping district, and refused to even let her fetch her belongings. “I said I had prescription medicine inside, which you can’t buy anywhere else, and they said that’s not their problem.”

“I think there’s some discrimination against non-locals,” says Yan, and Zhang agrees, “I realized I still don’t belong in this city.” Cui thinks panic over the disease is also a factor. “It’s a disorderly mob whipped up by a few scared ringleaders, but they’re not the only ones afraid of the epidemic,” she says. “I hope they’ll let me in soon, before I get infected outside.”

The tenants’ WeChat group continues to ping with updates from similarly frustrated renters. “The town square in my county suddenly started playing the song ‘Welcome to Beijing,’” one user, who has not yet returned to the capital, reports at the time of writing. “Seriously?”

Update: At press time, the Beijing municipal government announced that returning residents who have not been to nor come in contact with anyone from Hubei province, the Chinese region hardest hit by the coronavirus, do not need to go under 14 days of supervised medical observation.

Names have been changed in the story

All photos provided by interviewees