In the Chinese folk story “A Village Girl and the Emperor (《皇帝与村姑》),” a peasant girl hides and feeds a warrior fleeing from rebellion.

The warrior goes on to be the first emperor of the Southern Song dynasty (1127 — 1279), and grants all women of the area special wedding ceremonies as a mark of his gratitude: “One village girl saved Emperor Gaozong, bringing all ladies in the eastern Zhejiang grand reception like a king when they wed,” goes the line from Yue opera based on the story.

Since that period, it is said, elaborate wedding ceremonies have taken place in eastern Zhejiang province where the story is set. The ceremony’s defining event is the “ten li formation of red makeup (十里红妆),” or “ten li honor guard,” a long procession to send off the bride to her new family, or 送亲, with music, dancing, crimson decorations, and lavish dowry gifts. The ceremony, still sometimes seen today, is even more extravagant and ostentatious than traditional weddings in other parts of China.

The run-up to the ceremony can last from a few days up to several months, encompassing negotiations for the dowry, obtaining permission from relatives, and checking the suitability of the couple’s birth dates (referencing their Chinese zodiac and Daoist concepts of the Five Elements). The bride’s relatives prepare a dowry for the bridegroom’s family, with the money and gifts intended to help their daughter enjoy high standing in her new family.

On the wedding day itself, a long procession makes its way to pick up the bride, and then bring her to her new home. The bridegroom rides at the front of the wedding procession, and ties a red ribbon rosette to his belt as a symbol of peace, harmony, and happiness in the couple’s married life. Behind the groom come porters carrying the dowry items, followed by the bridal sedan chair carrying the bride-to-be, with her family behind.

The procession features numerous dancers and musicians, beating gongs and drums, and those simply ensuring the smooth passage of the wedding procession carrying signs saying “give way (让道)” and “escorting the bride (迎亲).” Musical instruments—normally the suona (唢呐) and sheng (笙)—and chanting accompany the procession and ensure a lively atmosphere.

The number of gongs and drums, signs, and other musicians and escorts in the procession would have varied in the past according to the family’s status. For the upper classes, flags and banners depicting dragons, phoenixes, and leopards might be displayed. On arriving at the bridegroom’s family home, the new couple pays respects to the groom’s parents and then host a meal with relatives and friends, before entering the bridal chamber together.

All wedding decorations and gifts are painted an auspicious red. The bride’s dowry would often include all manner of practical necessities, including furniture such as wardrobes, chests, and water basins. Placed at the front of the wedding procession, the dowry is on full display to show off the prestige of the two parties.

The most important part of the wedding procession is the bridal sedan chair, or “10,000-hour sedan (万工轿),” so-called because it can take months to carve the ornately decorated seat. The chair is also known as the “eight carriers big sedan (八抬大轿),” because it needed at least eight porters to carry.

Traditionally, the chair was hand-carved from wood without the use of any nails, and extravagantly with scenes from mythical stories that impart blessings on the new couple. On frequently used carving shows the “delivery from Qilin (麒麟送子),” which depicts the birth of Confucius, who was supposedly delivered by the mythical Qilin, emphasizing the desire for the marriage to bear children. Scenes from classical love stories, such as Romance of the West Chamber (《西厢记》), are also found. 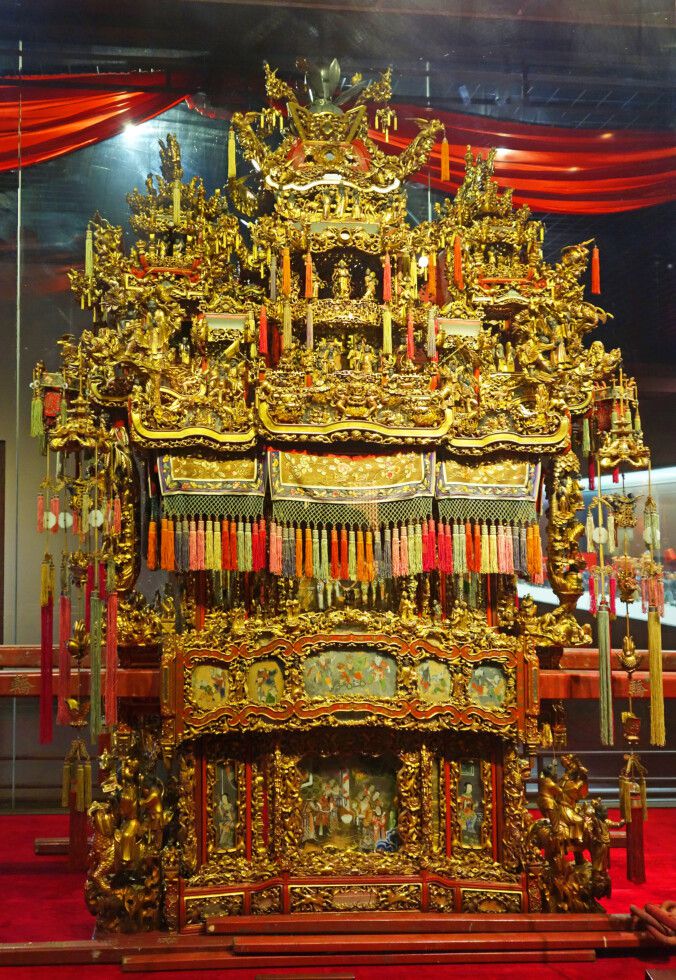 A “10,000-hour sedan” in the collection of the Zhejiang Provincial Museum

The most ornate bridal sedan chair could reach 1.5 meters in length and 2.75 meters in height, with 250 Chinese characters and numerous animals, birds and scenes carved onto the wood. The chair would also be painted red, and accented with gold leaf for those wealthy enough to afford it. When sending off the bride, the exquisite chair, the solemn carriers, and elaborate displays of gifts resemble a miniature moving palace. Preserved examples from the Qing dynasty (1616 — 1911) are on display at the Zhejiang Provincial Museum in Hangzhou. 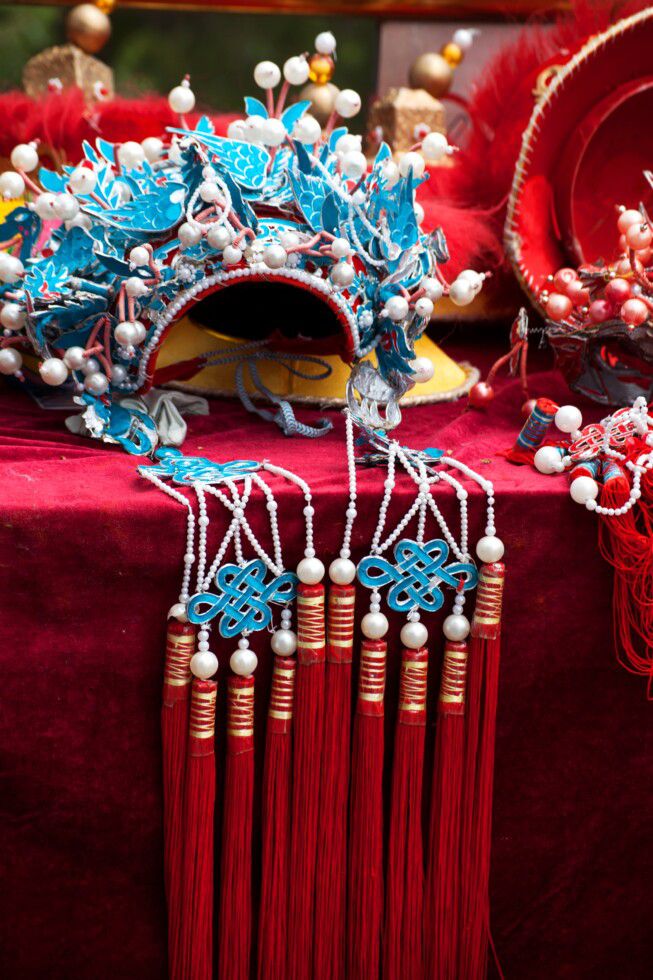 During the wedding ceremony the bride would wear an embroidered cape and coronet decorated with phoenixes. The woman could wear these clothes only twice in her lifetime: for her wedding, and during her funeral. Typically, only nobles and their families could afford such flamboyant clothing and elaborate decorations in the past, and they were used to signal a family’s social status. The bride of a lower ranking official would wear a cape decorated only with flowers; women marrying middle-ranking officials had capes sewn with mandarin ducks and the Asian paradise flycatcher bird; and the bridal capes of those marrying high-ranking officials families featured peacock and pheasant designs.

Today, the skyrocketing price of marriage, as well as austerity measures from the government, have rather toned down some of the more ostentatious weddings in China—and they’re strictly off-limits for public servants especially. Processions of limousines and luxury vehicles have become the preferred “honor guard” of many young couples, as opposed to carved sedans.

Still, in parts of Zhejiang, there are old-style wedding parades organized with the blessing of the local government in order to keep the traditions alive. “Having gotten used to modern weddings, I didn’t realize traditional weddings were even more astounding,” a Mr. Wu from Ningbo told China News after witnessing a re-enacted ceremony in Ninghai county. “I could feel the splendor and happiness of the ancient Chinese.” Weddings, then and now, had a way of making people feel like a king for a day.