It was the end of their world. By the middle of the 17th century, the Ming dynasty, which had ruled China for over 275 years, was disintegrating. Rival warlords marched their armies across peaceful villages and swept through once elegant cities. Foreign invaders from the north charged past the Great Wall and installed their own emperor in Beijing.

These circumstances forced scholars to abandon their genteel lives of poetry contests, courtesan appreciation, and painting to become refugees. In Jiangnan, the area south of the Yangtze River which had long been the cultural and intellectual heart of the Ming dynasty, elite male writers like Mao Xiang (冒襄) and Yu Huai (余怀) responded to the cataclysm with nostalgia for a world they believed was lost forever: the pleasure quarters of Nanjing, Suzhou, and other Jiangnan cities.

In Plum Shadows and Plank Bridge: Two Memoirs about Courtesans, Wai-yee Li has translated and annotated the poignant reminisces of Mao and Yu in a book that is an essential addition to a growing body of scholarship on the lives of women in late imperial China. In houses, boats, palaces, and pavilions, the men of Jiangnan enjoyed the company of talented women who pushed and, in some cases, transcended the established norms.

While most of these women were part of a demimonde that commercialized sex, courtesans also came to embody, at least in the eyes of their elite male patrons, a symbol of culture and refinement, as much performance artist as paid sex worker.

“The courtesan escaped the well-defined roles and relationships of traditional Chinese society,” writes Li. “Classified as ‘debased’ (jian), she yet consorted with elite men, sometimes as intellectual equals, and could claim respectability through marriage. She could befriend elite women. Starting from the sixteenth century, we find poetic exchanges between elite women and courtesans; some of them are even vaguely homoerotic in tone, unavoidable perhaps because poetic convention for praising female beauty and talent are often rooted in male desire.”

Famous liaisons between literati and courtesans were a popular theme of song, poetry, and prose even though—or perhaps because—such relationships between elite men and the women of the demimonde were fraught with legal and moral complications. Many elite men in imperial China lived their lives surrounded by other men, forming their closest emotional attachments with their fellow literati. Socially approved relations with women were based on marriages arranged for the benefit of the family. Elite men enjoyed the benefits of polygamy, but there were legal and social barriers against taking courtesans as wives and concubines.

The men lived in a world of highly prescribed relationships in which adoration, devotion, and intimacy played a subservient role to duty, filial piety, and fidelity. As Li argues, “The pleasure quarters might well have been the only place where agency, tension, yearning, and uncertainty—the ingredients of romance—could come into play.”

Mao Xiang’s portion of the book, translated from his memoir Reminisces of the Plum Shadow Convent is a sketch of the author’s experiences with several courtesans during his time as an aspiring exam candidate. Mao was from an elite family that claimed descent from Mongolian nobility in the days of the Yuan dynasty (1206 – 1368). While he never achieved the exam success expected of him, he was a prolific writer, a frequenter of all the right intellectual circles, and a member of the late-Ming political clique known as the Revival Society. 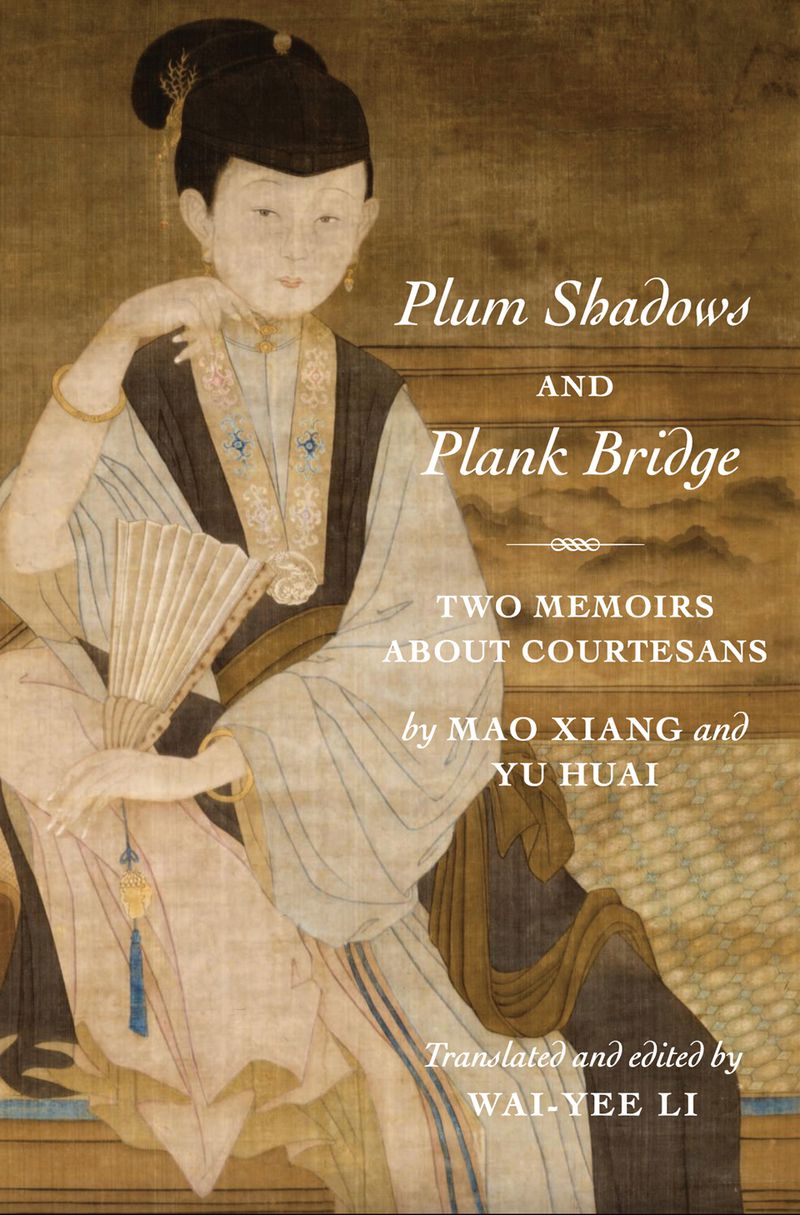 In Plum Shadows, Mao recalls his relationship with the courtesan Dong Bai (董白), also known as Dong Xiaowan (董小宛). Like most women in this book, Dong is a well-known historical figure on her own. Known as one the “Eight Beauties of Qinhuai,” she was a talented poet, and her story has been retold in several operas and films.

When we first meet her in Mao’s memoir, however, she is 16 and hungover. Nevertheless, this brief encounter becomes the foundation for a 12-year love affair set against the backdrop of the fall of the Ming and the Qing conquest of China in 1644.

In love but on the run from the Qing armies, the couple still finds time amid the chaos to share poems, enjoy works of art, and compare notes on their appreciation of finer things like tea and incense. In this, Mao celebrates the culture of connoisseurship in the late Ming. And yet, by portraying Dong as his equal in matters of taste, Mao is also appraising his lover as an object. Dong’s excellent appreciation of poetry and tea validates Mao’s connoisseurship of her as a courtesan.

The art of appraising courtesans, ranking them, and demonstrating good taste and discernment was a popular pastime for elite men. Li notes that the term for “appraising concubines,” or pinji (品妓), was similar to appreciating other commodities like tea, or pincha (品茶). In Miscellaneous Records from the Plank Bridge, the writer Yu Huai offers anecdotes and reviews of 27 concubines. Dong also appears in Yu’s memoir, but as one of a swirling cast of characters that recall a time and place for which Yu mourns deeply.

It’s a different kind of nostalgia from that of Mao, who focuses mainly on his relationship with one woman. As the translator Li notes, Mao’s writing on Dong also emphasizes continuity amid tragedy, as the lovers can still enjoy some of life’s pleasures despite the calamity around them.

Yu, on the other hand, cannot overlook all that has been lost. He strolls through a neighborhood in Nanjing where he had once spent youthful days enjoying the company of elegant courtesans and laments, “Towers and buildings have tumbled in kalpic ashes and beauties have turned into dust. How can anything exceed this when it comes to melancholy reflections over rise and decline? Before frustrated ambition could find fulfillment, I encountered chaos and destruction.”

Plum Shadows and Plank Bridge also includes collections of poems and prose essays about two of the most famous courtesans from this era: Liu Rushi (柳如是) and Chen Yuanyuan (陈圆圆), who both figure tangentially in the pieces by Mao Xiang and Yu Huai.

Liu and especially Chen figure prominently in accounts from this period because of their associations with key figures in the Ming-Qing transition. Two of Liu Rushi’s lovers, Chen Zilong (陈子龙) and Qian Qianyi (钱谦益), were accused of being involved in anti-Qing activities. Chen Yuanyuan is most famous for her relationship with Wu Sangui (吴三桂), the Ming military officer whose alliance with the Qing leadership opened China’s gates to the Manchus.

It is particularly interesting to have the different versions of Chen Yuanyuan’s story juxtaposed in the same book. This allows the reader to follow how the narratives around the courtesan evolved over time. In the famous poem by Wu Weiye

(吴伟业), Chen is the femme fatale partially responsible for the end of the Ming dynasty. Subsequent versions in the book from the Qing era and after portray her with more agency, in some cases as a conspirator, or a political, moral, or even national conscience.

Late imperial literati could be beautiful writers, but they were also fond of obscure references, inside jokes, and literary allusions. Plum Shadows and Plank Bridge is a tour-de-force of translation with copious notes and annotations by Li assisting the less literate in appreciating the aesthetic and intellectual world of these remarkable men and women. As Yu writes, “As I think quietly back on events past, there is no wherewithal to reclaim them. All I can do is record what I saw and compile these accounts.”

The Fox Spirit of Bluestone Mountain

In Chinese legends, the fox spirit is a supernatural being who often appears as a beautiful, seductive woman. In this late 19th century novel, a nine-tailed fox spirit starts a love affair with Young Master Zhou, the handsome and talented son of a retired mandarin, in order to steal his life force and become a god. Zhou’s servant asks a Daoist priest to expel the spirit, but she proves to be more than a match for him. Translated into English for the first time by Timothy Gouldthorp, the book features a plot and characters deeply influenced by classic Chinese folklore.

This historical fiction by Alice Poon draws from three real-life courtesans who lived in Nanjing in the 17th century: Liu Rushi, an accomplished poet; Chen Yuanyuan, whose unmatched beauty was blamed for indirectly causing the fall of the Ming dynasty; and Li Xiangjun, a talented musician who dared to fight oppression. Though they are not known to have met in history, Poon portrays the three women as close friends. The story unfolds from the viewpoint of Liu’s daughter Jingjing, who pieces together the story of the sisterhood of three independent-thinking women through her mother’s diaries.

The Book of Shanghai: A City in Short Fiction

The latest addition to the Comma Press’s award winning “Reading the City” series, The Book of Shanghai presents short stories from 10 contemporary Shanghai writers from Wang Anyi, a well-established author born in the 1950s, to Wang Zhanhei, a rising literary star born in the 90s. Ranging in genre from urban fiction to sci-fi to whodunits, each story is set in China’s biggest city. Together, they paint a multi-dimensional picture of Shanghai, its people, and its unique past and present. – Liu Jue (刘珏)

Love Amid the Ruins is a story from our issue, “Disaster Warning.” To read the entire issue, become a subscriber and receive the full magazine. Alternatively, you can purchase the digital version from the App Store.