Xiaoruo’s residents say the village got its colors when a local official took a trip to the seaside of Greece and Italy, and came home convinced that he could make the declining fishing community in Zhejiang province look just as postcard-perfect.

Over several months in 2017, each of the 500 households of Xiaoruo village was assigned a pastel hue to paint over their stone and cement homes: coral pink, sunflower orange, lemon yellow, or sky blue. After that, it didn’t take long for cool-hunters to begin flocking to the remote village, with some even christening it “China’s Santorini.”

“Nowadays, when people travel, taking photos is as important as actually going there,” says Dai Hong, 27-year-old owner of the pink-washed Lindo Art Space, sitting in her coffee shop overlooking the sea.

On a sunny afternoon at Lindo, visitors stake out positions for snaps: lounging by the pool against a turquoise wall, sipping lattes next to tropical plants. “I have created a space to fulfill the dreams of our generation,” boasts Dai.

Dai credits the rise of “Rainbow Village” to Xiaohongshu and Weibo, social media platforms popular among young Chinese. The former, officially known in English as RED, is home to 300 million users, the majority of whom are female and under the age of 30. It is a mecca of lifestyle bloggers who have helped numerous consumer trends and travel destinations shoot to fame, including “Rainbow Village.” 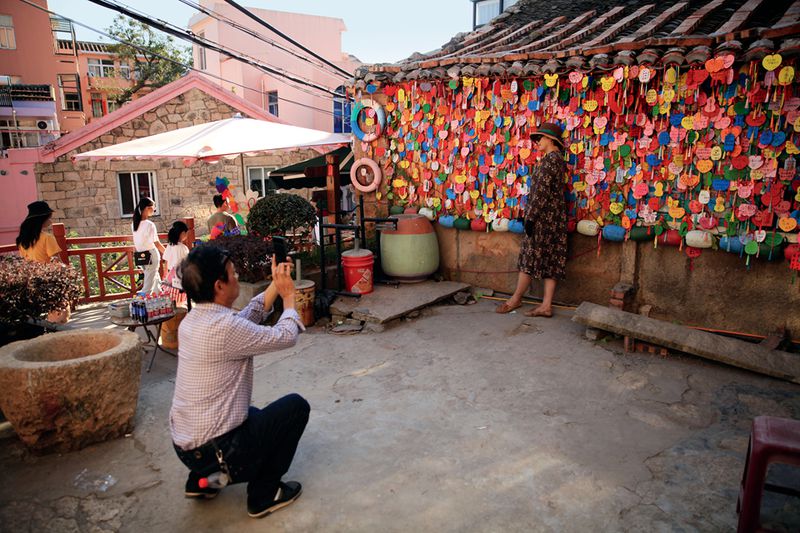 The rise of Xiaoruo village is emblematic of an economic model prevalent in the Yangtze River Delta where entire villages made their fortunes by mastering a single product. Yet as China’s manufacturing rush cools, its leaders have turned their development focus toward rural communities—either by reviving agriculture, handicraft industries, or traditional architecture as vehicles of “rural nostalgia,” or adopting new-age themes like becoming “the ultimate fairytale backdrop,” as some bloggers have described Xiaoruo.

Like other villages, Xiaoruo had been gradually losing residents as young people joined the 280 million Chinese moving from the countryside to the cities, with the population dwindling so low that three other villages’ governments were merged with Xiaoruo’s last year.

Once an island in the East China Sea, Xiaoruo was connected to the Zhejiang mainland in 2018 when the strait separating it from the shore was filled to form a land bridge, much of which is now a vast parking lot that can fit over 100 cars. The 50 tour buses that arrive at “Rainbow Village” every day unleash new tides of DSLR-wielding visitors into the hilly complex of splendidly colorful houses.

Like many similar “theme towns” that pursue development unmoored from local culture and history, the village strains for a narrative—some residents tell visitors that the colors began with a woman who painted her house to guide her husband home from sea, and other women copied her until the whole village was saturated with colors. “It’s a nice story, no?” smiles Dai wanly.

Betting on the village’s touristic rise, the Dai family, originally from the nearby Jiangsu province, borrowed money from relatives to renovate old buildings at the crest of Xiaoruo Village in 2018. Having signed a 10-year lease to rent the land from local families, they are the first—and, so far, only—outsiders to come to Xiaoruo to open a business catered to tourists, taking a lion’s share of visitors.

Dai Lianhua, Dai Hong’s mother, informs the visitors that they must cough up 10 RMB to take photos, or buy a cup of coffee. “It cost 3 million to build this place,” she explains. “They can’t be taking up our space for free, right?”

The influx of visitors from the outside world has turned life in Xiaoruo upside-down—in some senses, literally. Real estate values have flipped; fishing families used to prefer houses at the base of the island to avoid a hilly climb home after a long day’s labor at sea.

“Now, they all ask us: Do you have an ocean view?” says an exasperated local, Ms. Chen, whose family lives at the bottom of the hill. Chen’s family charges 200 RMB a night for a room in their family home-turned-guesthouse, while Lindo can charge up to 800 RMB for its rooms at the top of the hill with Scandinavian-style furniture and a succulent-filled courtyard.

Income from tourism hasn’t benefited all residents equally, with profits accruing to those with the money to invest and know-how to attract young Chinese tourists. Shi Jiaomi, a 67-year-old local, sells mass-produced plastic pinwheels and bubble guns as souvenirs in front of her home, as well as wooden plates on which tourists can write their wishes and hang them on a wall. “I can’t even make 1,000 RMB a month,” Shi sighs, as she struggles to communicate with visitors in her thick accent.

“So if you ask me if tourists have changed my life, the answer is no,” Shi says, though she notes the newly renovated cement sidewalk up the village has made it easier for her to climb. 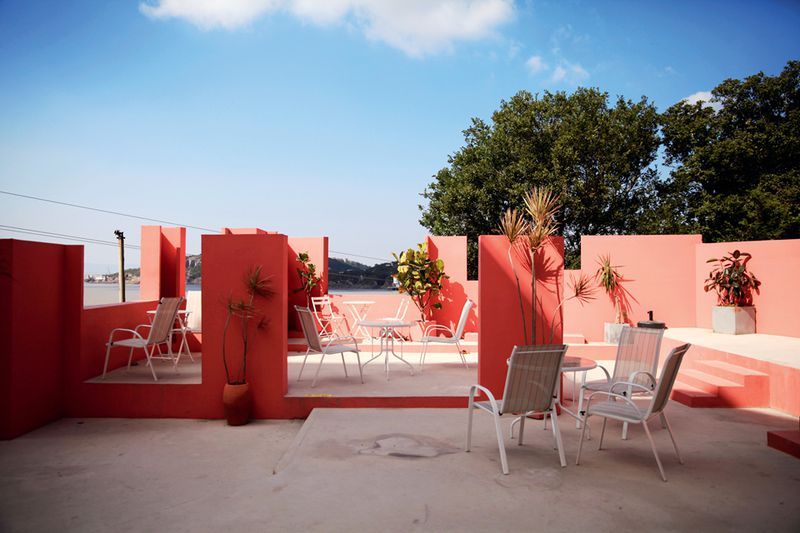 Lifestyle photographers have put Rainbow Village on the map

Shi is like the many elderly living in Xiaoruo—her husband’s crab-fishing ship is now out somewhere in the waters off Shandong; her children have left the village to find work in the cities. She walks around the town in slippers, scooping up neighbors’ toddlers with ease. “Look, our village is only the elderly and children. Plus tourists.”

However, more and more of Xiaoruo’s residents are choosing to stay in the village, rather than sail away on fishing ships or head to work in the cities.

Chen’s husband began working on his father’s boat when he was 12 years old. Thirty years later, he no longer heads out to sea every summer. Instead, his family has opened a restaurant and small hotel, Great Wave Seafood House, advertising sour-and-spicy fish soup in neon yellow just above the parking lot.

“I didn’t graduate from elementary school. But now, at 40, I can sit indoors and make good money. Not bad, right?” he chuckles, tallying up the income from China’s “Golden Week” holiday in October.

Chen Xuecheng (no direct relation to Ms. Chen), a 23-year-old Xiaoruo native who works at Lindo Art Space, scurries about helping carry visitors’ suitcases to the gate, taking coffee orders, and showing guests to their rooms.

“My parents won’t let me go into fishing. They say the work is too hard, and too dangerous,” he notes. He had considered following a cousin to work in an air-conditioner factory in Wuhan, but when the job at Lindo opened up, he chose to stay at home. 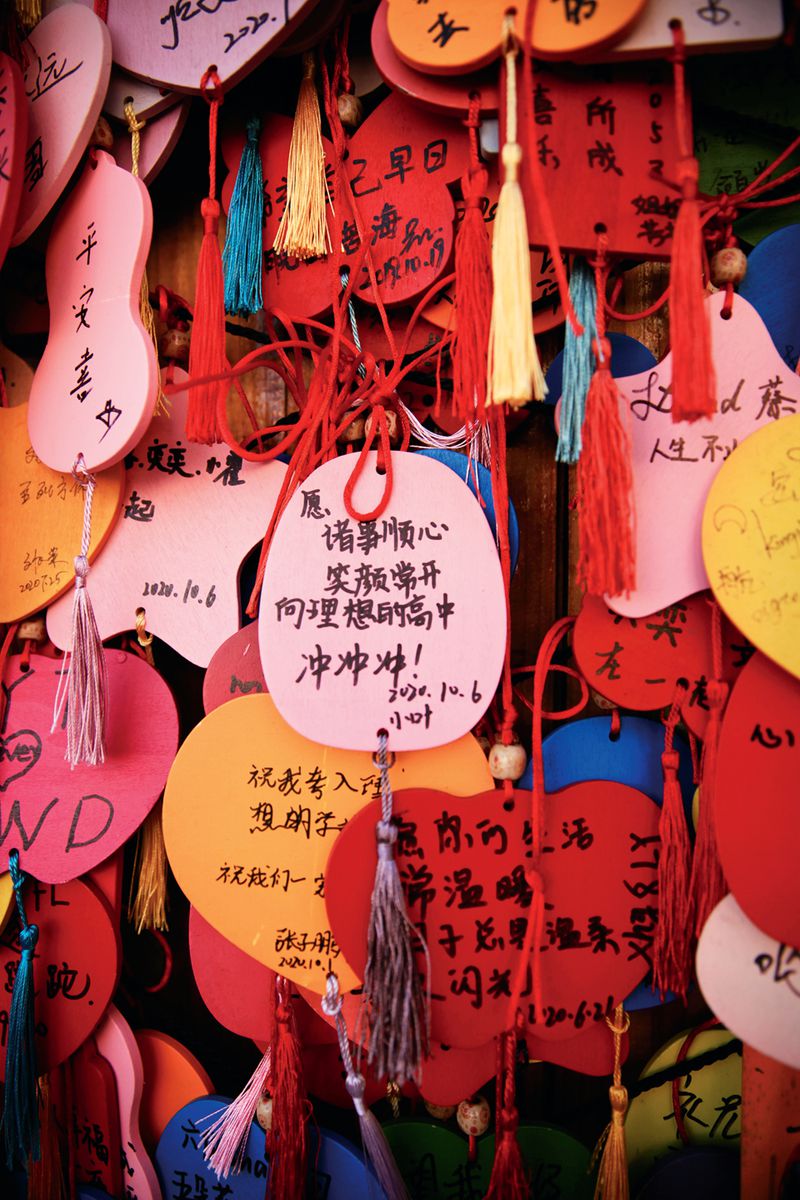 Although paint instantly transformed Xiaoruo into Rainbow Village from the outside-in, the coming years may change it from the inside-out.

At night, the family converges in the Great Wave Seafood House for a late meal as Ms. Chen’s husband, also surnamed Chen, closes up shop. He gripes of how the Dais allegedly paid one family in Xiaoruo double what they negotiated with others for the lease of their land. Mr. Chen says the deal has created acrimony among villagers.

The newcomers have their own gripes. “Out here it’s pretty, but it’s not well-planned,” Dai Hong tells TWOC, citing kilometers-long traffic jams on holidays and a dearth of public seating areas in the village. As to her leases, she notes that there was no standard price for renting out land in the area, so she only paid as much as the residents were willing to offer.

With the local government planning to install a sea viewing terrace, and connect more roads to the village, Dai dreams of a time when the village is filled with artist studios and wedding venues—“a kind of utopia, where you can come and forget all your worries.” Dai said that the government intends to help move some sea-facing graves onto the mainland to reassure superstitious tourists, though Mr. Chen, alarmed, says he hasn’t heard of any such plans.

In the parking lot, a Taizhou city government worker on his third visit to Xiaoruo for work mourns over the changes to the community. “Before, when we did work here, there was no cheating or scamming,” he says. “Now people start to think of all kinds of ways to make a buck. The local fishing people’s lives are no longer simple or pure.”

Between the nostalgic who wish for the countryside to remain pastoral and unchanged, and those who want rural areas to rush down the same paths of development as cities, scholar Yang Guiqing seeks middle ground. “We cannot equate rural modernization with rural urbanization,” the urban planning professor at Tongji University said in a 2018 interview with People.cn, advocating instead for “organic renewals” in which “villagers can participate and share benefits.”

“I don’t hope this island will be overdeveloped, but it needs fresh blood. If your planning is not well-done, you may as well not develop it,” mused Dai. “You’ll not only waste a space, but ruin it.”

All images by Tina Xu

“Chasing Rainbows” is a story from our issue, “Rural Rising”. To read the entire issue, become a subscriber and receive the full magazine. Alternatively, you can purchase the digital version from the iTunes Store.