Amid public mockery and criticism, the government of Lingshan, Guangxi, recently apologized for and changed the name of a local county’s publicly funded research team, “Wu Zetian’s mother is in Qinzhou (武则天她妈在钦州),” which sounds like a profanity in Chinese.

However, the research team (which was led by the county’s top officials, including its deputy mayor and tourism bureau director) was not discouraged by another public concern—why were they spending taxpayers’ money on finding out whether the city is the hometown of the mother of a female Chinese emperor from the seventh century?

Though the project officially aimed to “discover and preserve Lingshan’s historical and cultural heritage,” mainstream Chinese media pointed out it was mainly aimed at attracting tourists, and asserted the government had gone too far in its quest historical reference points to boost the county’s reputation.

In fact, over the last few decades, many cities have tried to connect themselves, however tenuously, with historical or fictional figures, with some even publicy battling over claims to be a particular individual’s hometown. Local governments have also spent extravagantly on relevant history or culture-themed projects, often resulting in huge waste of resources and money.

According to Changjiang Daily, there were over 100 cases of such conflicting “hometown claims” from 2000 to 2015. For example, the cities of Guoyang in the southeastern Anhui province, Luyi in the central Henan province, and Lintao of the northwestern Gansu province, all claimed to be the hometown of Lao Zi, the founder of Daoism. Similarly, Tangshan in Hebei province, Shenyang and Tieling in Liaoning province, and the town of Wuyang in Jiangxi province all named themselves the birthplace of Qing dynasty (1616 – 1911) writer Cao Xueqin.

Even more places scrambled to claim their locale as the hometown of Li Bai, one of China’s greatest poets, who lived during the Tang dynasty (618 – 907) and whose parents were apparently very well-traveled. The controversy goes back a long time, with the Ming dynasty (1368 – 1644) philosopher Li Zhi once commenting that people in Sichuan, Longxi (present day Tianshui, Gansu province), and Shandong all took Li as their local. 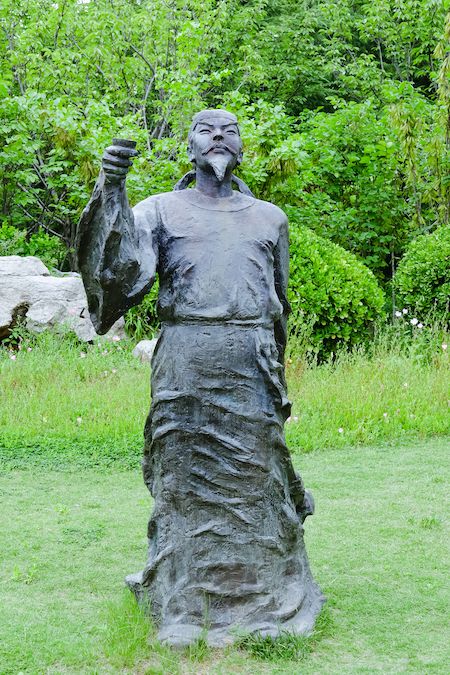 Each town can usually find some support for their claim in historical records. According to Tang poet Wei Wan (魏万), a friend of Li’s, Li Bai’s parents were Longxi natives, but then settled in Mianyang, Sichuan province, and gave birth to Bai there; while Li also narrated in his poem “To Han Jingzhou”: “Bai, a civilian from Longxi, is now stranded in Chuhan [present day Anlu city, Hubei province] (白，本陇西布衣，流落楚汉).”

Though the town of Jiangyou in Mianyang trademarked the phrase “Li Bai’s Hometown (李白故里)” in 2003, and boasts of having lots of Li Bai-related scenic spots, Anlu later gave itself the same title because Li got married, had children, and lived there for over a decade. In August 2009, when Anlu advertised itself as Li Bai’s hometown on state broadcaster CCTV, netizens from Jiangyou expressed outrage, while the local government threatened to sue its rival over trademark infringement.

After Jiangyou registered its trademark, the town’s tourism revenue tripled from 500 million RMB in 2003 to 1.5 billion RMB in 2007, according to local official Pu Yongjian. In 2009, Pu told the official newspaper of the CPPCC National Committee that historical or cultural branding provided intangible benefits like improving the city’s cultural influence and residents’ sense of pride, in addition to economic gains.

Similar disputes have also emerged over mythical and even fictional characters. For instance, both Jiangsu’s Lianyugang and Shanxi’s Loufan claimed to be the hometown of the Monkey King from the classic novel Journey to the West, while Yanggu and Linqing in Shandong province, and Huangshan in Anhui all promote themselves as the birthplace of the villain Ximen Qing from novels The Outlaws of the Marsh and The Plum in the Golden Vase.

Even the origin of foods can be subject to rival claims. Both Baoding and Hejian in Hebei province take credit for having invented donkey burger. In October, when the city of Zhenjiang in Jiangsu province was granted the title “Vinegar Capital of China” by the China Light Industry Council and the National Food Management Center of China Light Industry, domestic media felt sorry for Qingxu of Shanxi province, which had boasted of over 3,000 years of vinegar production, advertised itself with the “Vinegar Capital” title officially for over a decade, and invested over 5.5 billion RMB in building a vinegar-themed town last year. 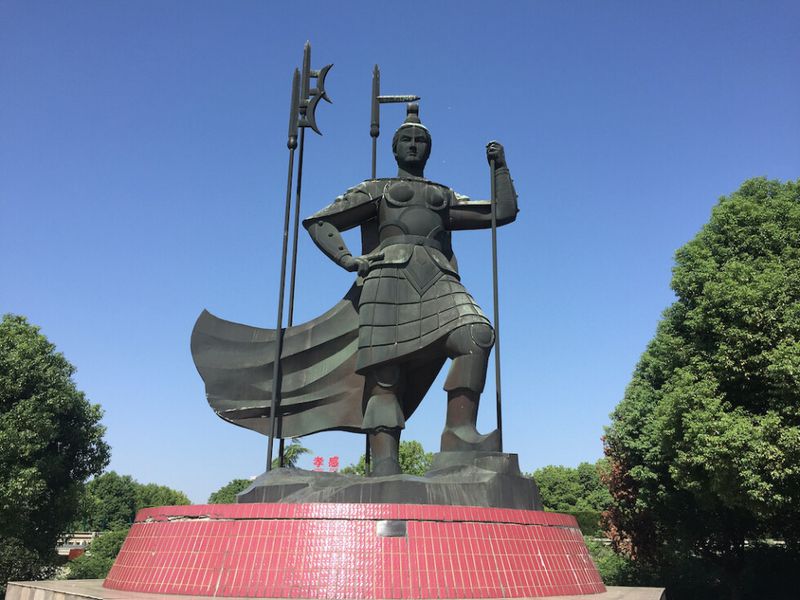 In fact, acknowledgement by semi-official bodies is no guarantee that a town’s competitors will back down. In 2007, Yucheng county of Henan province was granted the title “Hua Mulan’s hometown” by the Chinese Folk Literature and Art Association. However, in 2015, when Chinese comedian Jia Ling depicted the legendary heroine as gluttonous, unfilial, cowardly, and stupid in a performance, both Yucheng and the Huangpi district of Wuhan in Hubei province took part in the ensuing outrage in the name of Mulan’s hometown.

To make the most of such historical or cultural connections, and to reinforce their claims, many cities have spent extravagantly on tourism projects related to their adopted historical connections.

In June 2016, Jingzhou, Hubei province, unveiled a giant statue of Guan Yu, a general from the Han dynasty (206 BCE – 220 CE) who was later deified and honored as Guan Gong (“Duke Guan”) or Guan Di (“Emperor Guan”). The statue, which cost over 170 million RMB to build, towers at over 57.3 meters tall and weighs over 1,200 tons. As part of a Guan-themed park, it was designed to boost local tourism based on the cult of Guan Gong and connections between the general and the city, which was a historical stronghold that Guan had guarded but later lost, according to the 14th century classic novel The Romance of the Three Kingdoms.

The statue, however, was found to have sunk into the ground this July, drawing ridicule and criticism online. It now faces relocation at the order of China’s Ministry of Housing and Urban-Rural Development, because it violated the local construction height limit of 24 meters and “damaged the style and historical context of the ancient city.”

Meanwhile, the park earned revenues of less than 13 million RMB over the last four years, and the whole project has already cost over 800 million RMB, without adding in the costs of relocating the statue. “Rough development and poor management are common issues for some ‘celebrity’ hometowns,” an op-ed in Henan Daily commented in August, pointing out that boosting the local economy requires more than the simple construction of a temple or park, or hosting of some event.

According to the Jingzhou government’s latest announcement, they are working with experts in planning, construction, and cultural protection on a relocation plan for the statue. It is unclear where the landmark will find its new home, but hopefully, the decision will be less controversial than the original home of Guan Yu itself.