The time for rejoicing has finally come as the Viral Week makes its post-New Year’s comeback. Coming up on today’s edition, we bring you stats for the Spring Festival, fingerprinting for security-adjacent purposes, towering above the Bird’s Nest, and the most romantic city in the Middle Kingdom (according to Amazon China). But first…

Tigers have developed a mixed reputation in China. On the one hand, they are revered legendary animals as well as on of the Four Symbols of Chinese constellations. On the other hand, they feared killers that have been at the center of recent safety scandals.

Needless to say, authorities would not take lightly any sightings of these striped felines in the vicinity of humans.

Recently, a park in Zhejiang province received reports from visitors that a tiger had been roaming the grounds. In response, a crack team of specialists were sent out to contain the threat. As they made their way into the park, they questioned frightened visitors to pinpoint the exact location of the beast. Upon arrival, a startling discovered was uncovered—the tiger was in fact a stuffed toy. 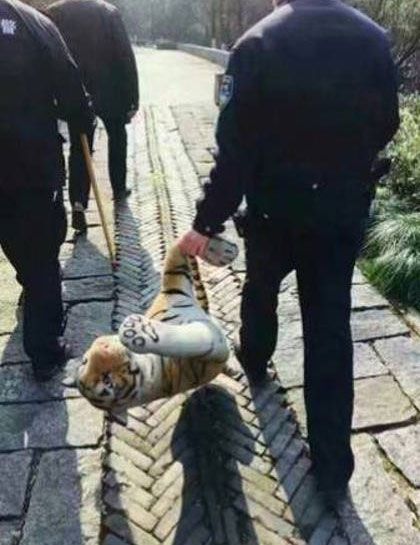 While this may sound completely unbelievable, readers ought to know that the whole incident was filmed by one member of the containment team.

China has recently announced that they will begin to collect the fingerprints of foreign visitors. The program has started with Shenzhen airport before moving into other areas.

If this sounds like bad news in terms of the security of personal details, there are some good news. Certain groups of people will be exempt from fingerprinting (for now): those below 14 years old, those above 70 years old, and those with diplomatic passports.

It’s not too late to apply for diplomacy school.

Last weekend saw the official end to the Spring Festival (you may have suffered indigestion due to overeating of yuanxiao or tangyuan), which means that lives will be returning to normal and fireworks are again banned (though they were kind of banned during the Spring Festival in many cities, but attempting a fireworks ban at that time of year is always a difficult proposition).

As a summary of the happenings, China Daily has posted an infographic highlighting some of the changes and stats that this year’s celebration has seen.

THE BEST FOR ROMANCE

Just in time for Valentine’s Day, Amazon China released list of the top ten most romantic cities in China.

And in true Amazon fashion, the criteria by which this was judged was the quantity of books of a romantic nature each city purchased.

Number one of the list was the city of Zhengzhou, Henan province, known for being one of the Eight Ancient Chinese Capitals as well as one of the Most Polluted Cities in China, which may explain why so many people stay indoors to read.

The complete top ten, as compiled by Amazon China, goes as follows:

Visitors to China’s capital now have a new attraction to visit as this weekend after the opening of the 2008 Olympic stadium, the Bird’s Nest, to the public.

What? The public could already visit there, you say?

Well, you’re not wrong, but now a new section has been opened up. With a length of one kilometer, tourists can now access the full length of roof of the stadium, making it the first main Olympic stadium to open up its upper echelons to the public.

Finally a place to enjoy those clear blue Beijing skies.