From warehouse to door, Hatty Liu spends 24 hours with the courier army ferrying packages across the city

Work begins early at the distribution center of courier firm STO Express, outside Beijing’s eastern Fifth Ring Road. Drivers report at 7:30 a.m.—6:30 a.m. if the workload is heavy—when the warehouse doors open to reveal packages from all around the country, scattered in heaps across the floor.

China’s delivery industry is now the largest in the world. According to the State Post Bureau, courier companies—kuaidi (快递, literally “quick delivery”)—processed around 31 billion packages in 2016, a number that’s grown more than 50 percent every year for the last six years. An estimated 1.2 million people work as express deliverymen, also called kuaidi; at peak periods such as the “Singles’ Day” shopping holiday, each driver may deliver up to 300 parcels per day, piled as high as the warehouse ceiling.

Couriers are first responsible for sorting these packages by hand: checking addresses, scanning labels, and taking those in their delivery area to their electric-powered van. Liu, an STO courier, arranges his in neat stacks by community, building, and hall number, before setting out in rush-hour traffic to the city center. With an average 100 packages to deliver every day before 3 p.m.—closer to 200 on Mondays, since some offices can’t accept deliveries on weekends—he uses any method he can to save time. After parking outside his first office building at 9 a.m., Liu arranges the packages again by floor in a burlap sack and works his way from highest floor to lowest. Occasionally a package is dropped off with a co-worker or in a convenient cabinet in the hallway, and Liu places a call to its absent owner as he sprints back to the elevator.

The best of all possible days is one where nothing disturbs this routine. Although soft-spoken, with an almost Zen-like attitude toward setbacks, Liu has a surprisingly long list of professional peeves—and almost all are wrinkles that cost him extra time: “Big or heavy packages; packages that are strange shapes that you have to carry up stairs; places with no elevators…residential communities, they’re slower [to answer], more spread out than offices; and communities like this one,” he says in front of a locked building, where he just had to fetch a fob scanner from the property management office. 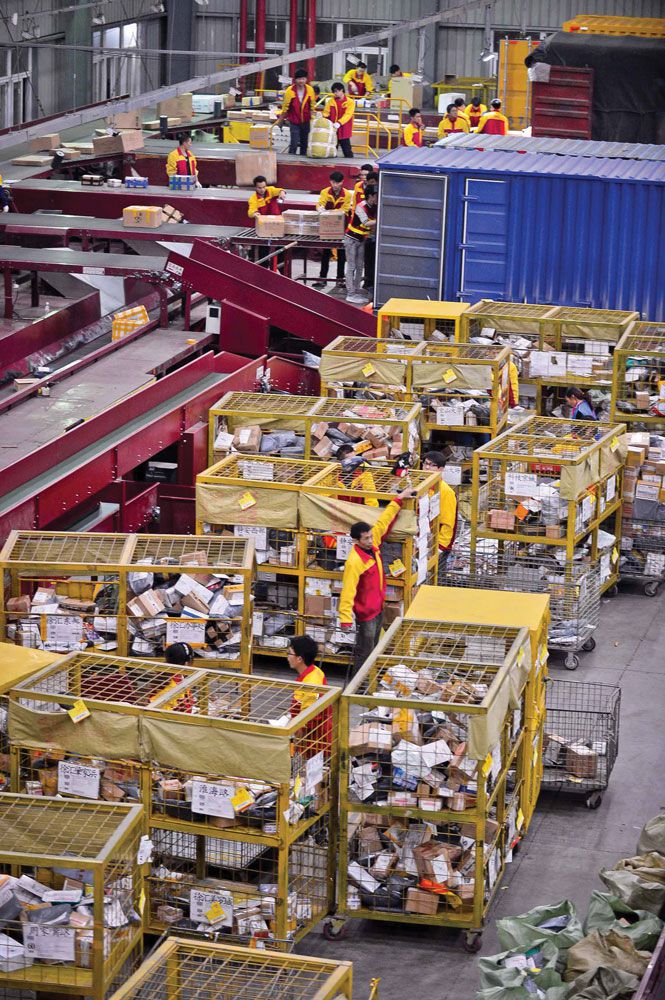 At a Shanghai distribution line for the Yunda courier company, workers toil all night long to meet demand over Singles’ Day (VCG)

“Cash on delivery is the worst of all, because you can’t just drop the package off outside,” Liu adds, picking one up as he speaks. It’s a product that cost 299 RMB and, as he feared, a call to the recipient reveals that they will not be home until evening; 6:30 p.m. is as early as they can make it. Liu will have to come back then, pushing his post-delivery workload even further into the evening.

If a courier’s day begins hours before they show up alongside bleary-eyed white-collar workers at their offices at 9a.m., it also habitually wraps up late into the night. The routine is repeated seven days a week. Couriers work on what’s known in China as a “comprehensive schedule,” which means they take turns taking individual days off every month, but can’t name days off ahead of time. “Sure, come along, but there’s not much to see; just hard work,” Wu, a veteran STO courier, replies when TWOC asks to shadow him for the day. Wu claims that the monotony and comparatively low pay is driving many of colleagues to join the food delivery business. But he’s not leaving anytime soon: “I’ve already done this for so long”—three years—“and I’m getting older now.”

The 3 p.m. delivery deadline is something Liu has imposed on himself, so as not to delay the second half of the “outside” part of his day: door-to-door pickups of outbound packages. Retracing his steps through all the morning’s office and residential buildings, he peers at the outboxes of any company that has pre-arranged for daily pickups, and visits customers who’ve made a special appointment. On a bad day, these appointments, in addition to the cash-on-delivery packages, can keep him out until 7p.m.

But the work doesn’t stop when he straggles back to headquarters. Before evening’s end, a courier also has to wrap, label, and scan the outbound packages; sort them into piles by location for shipping; then scan the barcode on the receipts of all his day’s deliveries and tally the total payment. “That could take me until 9:30, even 10, 11, if it’s peak time like ‘Singles’ Day’,” he says, referring to the mainland’s numerically pleasing Black Friday, November 11, when people across China treat themselves to billions of dollars’ worth of discounted goods.

Liu has only worked as a courier for a year, after cycling through a variety of careers, including IT worker and salesperson.“[Kuaidi] is pretty good,” he reckons. “You get into a routine, you know the people, the places, their habits. In food delivery you earn more but there’s more downtime, which is dull, and there’s much more risk if you’re late with food.” Courier Liu sorts through his delivery bag, arranging packages by floor from highest to lowest, before heading inside (VCG)

These “risks” can include traffic accidents, and rudeness and even violence from customers taking a late delivery. For Liu, the biggest conflict that day had been when a security guard snapped at him to move his vehicle. In April 2016, an employee of S.F. Express in Beijing was beaten up by an irate motorist after an alleged collision, an incident that provoked public debate on the profession’s lack of employee protection. In the last two months, there have been at least three reported incidents against regular kuaidi, including one in Shandong province in February where a customer gave a courier nine fractures for being five minutes late.

Fortunately Liu, has had no such encounters of his own. “As long as the packages arrive, then there are no problems, of course,” he comments wryly. Later, he admits that conflicts do happen and people aren’t always polite: “A person is not a machine, after all, and makes mistakes.” In these cases, couriers refer the customer to the company, who will check the records scanned into the system at every step of the process.

There are fines for lost or late packages, paid by the courier if the evidence shows the error was under their stewardship. Liu is cagey to discuss exact amounts, but media reports indicate fines can be hundreds of kuai for lost packages, and up to 100 RMB for a late package. Where Liu works, he says, Beijing couriers usually start with “around 5,000 RMB” in monthly base salary with a 1 RMB commission for each package delivered and 10 percent of the shipping cost of every outbound package they pick up. He doesn’t discuss additional benefits. Last November—after a local kuaidi allegedly died of exhaustion—an investigation by the Zhuzhou branch of China National Radio in Hunan province revealed that only two of 10 local firms provided accident insurance for their delivery drivers, and none offered health or pension benefits.

“In this profession, you either stay a very long time, or you’re gone quickly,” Liu says. He then lowers his voice and divulges a rumor going around the office: His colleague and mentor, Wu, is one of those who stuck it out, and is finally seeing some results. “He gets to take some time off on the weekend now,” Liu whispers. “Almost every weekend.”

Wheel Life China: Daily Express is a story from our issue, “Wheel Life China.” To read the entire issue, become a subscriber and receive the full magazine. Alternatively, you can purchase the digital version from the App Store.