With just four months left to go, here’s nine of the best upcoming movies in 2017

Wolf Warrior 2 has been the surprise Chinese hit of the year, breaking all sorts of records on its way to becoming China’s highest-grossing film of all time.

But the last quarter of 2017 has two more high-profile periods—National Day and Christmas—meaning other films will be making their own big push for superstardom before the year is out. Here are the nine domestic movies the nation’s cinemagoers are most looking forward to:

First up is the latest offering famed director Feng Xiaogang, whose films consistently garner interest. After the relative international success of his last, I Am Not Madame Bovary, Feng offers a coming-of-age period drama about a group of youths in a PLA dancing troupe.

Love, dance, and discrimination combine with an attractive cast and renowned director to make this the must-watch film of the National Holiday.

Mahua FunAge started out in 2003 as a theater group, whose lives changed in 2015 when first-ever feature film, the theatrical adaptation Goodbye Mr. Loser, went on to become the biggest sleeper hit of the year, elevating most of the cast to stardom. Their follow-up, the modern classic Mr. Donkey, was arguably an even bigger success.

Now they are back, tackling fighting, corruption, and body-swapping with the comedic timing that made them famous.

Viewers uninterested in coming-of-age stories or slapstick comedy will be glad for this next entry. Set in the 1960s, Chasing the Dragon is a gritty Hong Kong crime film based on the true story of corrupt police officer Lui Lok and crime lord Ng Sek-ho.

Fans of martial arts will be glad to know that Donnie Yen stars as Ng, while middle-aged women still swooning over the Four Heavenly Kings will be glad anytime Andy Lau takes the screen.

Sylvia Chang is one of the longest serving female actors-turned-directors in Chinese cinema, and this year she pulls triple-duty as Love Education‘s director, screenwriter, and lead actor.

The film follows the lives of three women of different generations, their struggles with love, and the contrasting problems that they face.

风中有朵雨做的云 A Rain Cloud in the Sky (December)

(No official posters out yet)

What makes A Rain Cloud in the Sky stand out is that it marks the first appearance in a Chinese feature film for Edison Chen since his exile from the mainland entertainment industry. Chen became persona non grata after an infamous leak of personal photographs showing Chen engaged in sexual activities with a number of Hong Kong celebrities.

To the average viewer, the name Yuen Woo-ping may not hold much significance. But for action aficionados, Yuen is the man behind many of the famous fight scenes in The Matrix, Kill Bill, and Ip Man 3.

Dunjia is actually a remake of Yuen’s 1982 film The Miracle Fighters and tells the story of a group of individuals on a journey to save the world.

Say what you want about the man, but Jackie Chan is one hardworking actor. This year could see the release of up to six of his films, and Bleeding Steel marks the fifth.

Chan plays a special forces agent (what else?) protecting a young girl with who he may share a special connection. Taking a leaf out of Wolf Warrior 2‘s book, this sci-fi thriller has drafted in foreign talents such as Tess Haubrich (Alien: Covenant) and Callan Mulvey (Batman v Superman: Dawn of Justice, Zero Dark Thirty).

Another legendary Chinese director makes an appearance. Chen Kaige (Farewell My Concubine), in Legend of the Demon Cat—or Cat Demon, depending on source—partners with Japanese producers to bring audiences a fantasy mystery: When a demonic feline starts wreaking havoc, a poet and Japanese monk investigate. 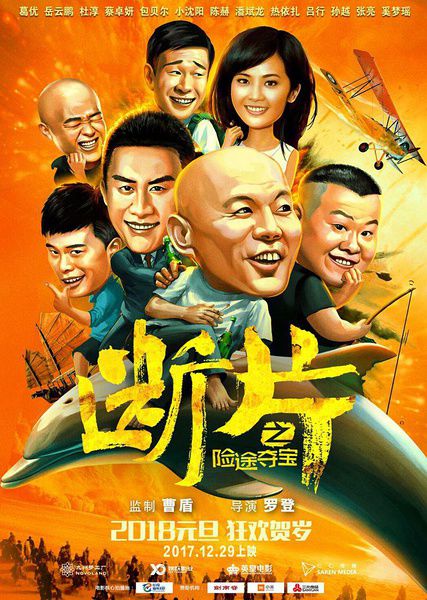 One of the most revered Chinese actors, Ge You partners with one of hottest crosstalk stars, Yue Yunpeng, and…Du Chun.

Although it lacks an official English translation, the title can be roughly translated as “Blackout Drunk and the Dangerous Journey to Retrieve Baby”. The plot follows three aquarium employees who mistakenly sell a prized dolphin (the titular “Baby”) while on a bender, and their sobering quest to get her back.

All images from Mtime unless otherwise captioned; all release dates via Douban The Fine Art of Faking It A look into the oddities of legal gambling in China