Tails from the Crypto

Tails from the Crypto

From kitty currencies to pets in the “cloud,” China’s cat economy is on the rise

“The fire is warm and the wool blanket is soft/ I stay indoors with my cat,” wrote poet Lu You. Already back in the Song dynasty, 800 years ago, cats were cool. Today, they even have their own Bitcoin-like currency, CryptoKitties, not to mention the unalloyed love of millions of Chinese.

“When I get up every morning, the first thing I look at is my cat; she just lies besides my pillow. I give her a stroke…That’s the happiest moment of my day,” says Chi Yingxue, a 20-something from Shenyang, Liaoning province, about her pet, Little Nine. “I wouldn’t get bored spending a whole day with her. With my cat, I feel like I have the entire world.”

Fairly innocuous, as pet-owner sentiments go—yet in China, an unbridled love of cats can be grounds for reprimand by the state. A 2016 editorial by People’s Daily scoffed at cat owners as “having nowhere to devote their instinct of protecting others, so they are more prone to pouring that into cats.” Conflating cat-ownership with the notion of “empty-nest youths” (空巢青年)—millennials working in first-tier cities, typically unmarried and living alone—the party mouthpiece implied that isolation, loneliness, and feelings of emptiness were reasons that people sought interaction with cats.

The paper wasn’t totally wrong: About 79.5 percent of pet owners in China were born in the 1980s or 90s, and over 51 percent are single, according to the 2015 “Survey of Chinese Pet Owners’ Consumption Habits” by Goumin.com, the country’s biggest pet forum. The country’s growing fascination for felines is also undisputed: According to Goumin, as of 2017, there were 59 million pet cats in China, part of an industry worth 134 billion RMB. That worth is expected to reach 188.5 million RMB by 2020.

Accompanying the dramatic increase is a growing cultural obsession with the creatures who once inspired Shen Zhenlin, imperial painter of the late Qing, to dedicate a whole series to “Cats.” Indeed, some fans now even object to the notion of their beloved cats as mere pets. Japanese novelist Genki Kawamura writes in If Cats Disappeared From the World that “It’s not humans who rear cats; it’s cats who deign to stay with humans.” Owners declare themselves “slaves to cats” (猫奴) and “excrement removal officers” (铲屎官); to interact with their pet is to “sniff” or “snort cats” (吸猫), an allusion to their addictive allure. 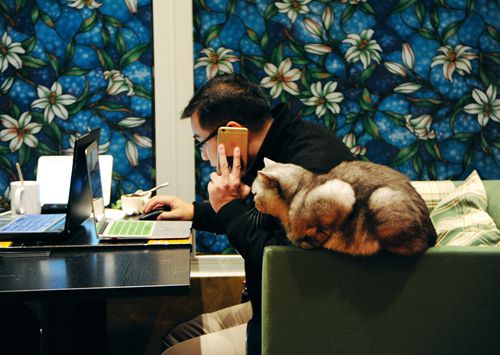 A cat cafe in Beiluogu Alley features over 40 cats of various breeds.“Playing with these fur balls sweeps away negative emotions; manycustomers stop by after work,” says the owner (VCG)

Even non-owners are besotted: The phrase “raising cats in the cloud” (云养猫) refers to indulging one’s feline fantasies vicariously online, through sharing pictures, memes, gifs, and videos, or even raising virtual cats. For a number of internet users, who have become professional cat bloggers, getting a cat was the first step to internet fame. “Huiyi Zhuanyong Xiaomajia,” a Weibo account now followed by 29 million users, originally started with pictures and videos of the blogger’s dog and a Scottish Fold cat; it’s now rumored that Xiaomajia commands 20,000 RMB per advertisement.

Loulou, a cat with the dedicated Weibo account “Lou Ban Niang,” had 760,000 fans who enjoyed making memes out of the feline’s videos, until she fell sick in October 2017. A cartoon strip titled “Fight! Be strong! We are waiting here for you to come back!” was shared on Weibo on Loulou’s behalf more than 8,000 times, though Loulou didn’t make it. However, when Chinese singer Zhang Hanyun used a meme featuring the deceased feline to wish her friend a happy birthday on Weibo later that year, outraged Loulou fans denounced the star as heartless and Zhang was forced to delete her post.

Cats in the cloud don’t have to be real, either. In 2014, Japanese games company Hit-Point introduced Neko Atsume: Kitty Collector, a mobile game in which players can purchase food, toys, and furniture to attract a variety of virtual strays to their backyard. By July 2017, the game had been downloaded over 19 million times (cat-owner Chi is a fan). That year, a film adaptation, The House of Cat Collection, received rapturous ratings on Douban.com. One user, awarding a five-star rating, declared: “All five stars belong to the cats. This film shows us once again how the kitties have taken over our planet.” 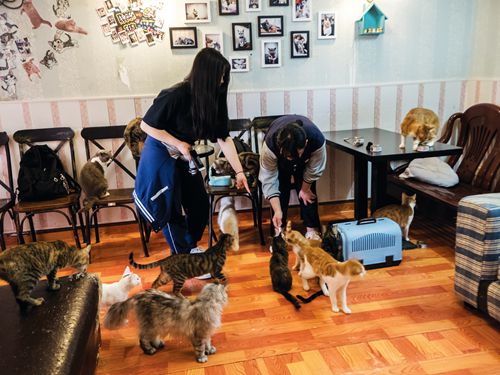 Two customers feed cats in a Shanghai cafe run by “Aunt Xia,” a noted cat lover who has helped to find homes for over 1,800 stray cats; all the cats here are strays and open for adoption (VCG)

This takeover was most apparent in the November launch of CryptoKitties, a blockchain-based game that is reportedly planning to enter China as a potential investment opportunity. Though an anticipated Chinese release of CryptoKitties by the Vancouver-based developer, Axiom Zen, did not materialize over Spring Festival, several knockoff versions did appear in the Chinese App Store, including Block Cats by 360. CryptoKitties allows users to raise, breed and trade virtual cats on the Ethereum network using cryptocurrency. Each CryptoKitty is owned by the user, validated through the blockchain, and has a generation number and unique features determined by a partially closed source algorithm. Two cats can be bred together to produce a new cat with a greater generation number. Generally, a cat with a lower generation number and rarer features has higher values.

Originally thought to be an attempt to deploy blockchain technology for recreational purposes, CryptoKitties’ popularity proved eye-popping. According to ETH Gas Station, within a week of release, it was hogging 11 percent of transactions on Ethereum, a blockchain network; at the time of press, players had spent more than 19 million USD trading cartoon kittens, with the most expensive changing hands for about 110,000 USD, according to third-party data site CryptoKitties Sales.

The burgeoning popularity suggests that China is embracing the idea of “nekonomics,” first minted by Japanese economists in 2015 to describe recession-proof businesses that trades on feline fascination. Combining the “economics” and the Japanese for “cat,” nekonomic strategies range from putting a kitty stationmaster on a train line to temples that litter their grounds with cat statuettes, all of which attract customers, though they may have nothing to do with the business itself. These gimmicks also fuel a supplementary market for cat-video sharing apps, pet stores, and kitty merchandise.

According to Yuan, the operating costs of a business like his “are twice that of normal cafes, mostly spent on the cats… food, cat litter, and personnel.” After seven years in business, though, Yuan has become part of a cat economy of his own—operating a pet store alongside his cafe, and a Weibo account where he share pictures of his cats with more than 32,000 followers.

He has even played a probable role in stimulating the trade in rare cat breeds like Abyssinians in Beijing. “There were maybe only three breeders when I started [the cafe], but now…more and more customers are coming in to inquire about Abyssinian cats.”

At another cat cafe in the Sanlitun neighborhood, the staff report that there’s at least “one incident every day” when an over-eager customer meets the claws of an annoyed cat, but for ailurophiles who can’t indulge their passion at home, these risks are just added realism. “I love cats so much, but I can’t have one at home, because my parents are allergic,” explains a 21-year-old repeat customer  surnamed Wang. “I don’t think raising a cat in the ‘cloud’ is meaningful. To ‘sniff’ a cat, you have to hold it with your own hands.” 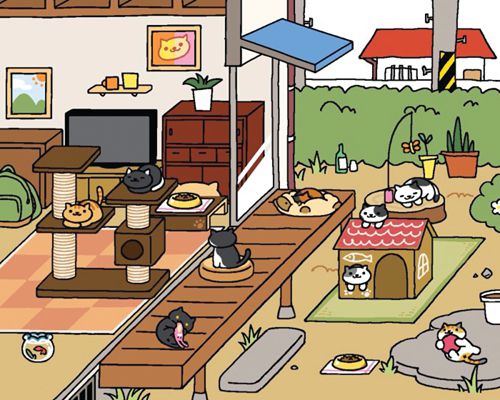 The aim of Hit-Point’s Kitty Collector is to lure all 62 breeds of cats to the player’s back yard with food and toys; users can rename and save pictures of the cats

Yuan’s experiences confirm that youths are the drivers behind China’s cat economy. “Most of our customers are young, from teenagers to those in their early 30s,” he says. “When they have time, they come to the cafe; when they are busy, they resort to the internet. They must find a way to get close to cats.”

In a 2016 interview with Japan Bullet, analyst Masahiro Yotsumoto traced the roots of Japan’s cat economy to two “opposing aspects” of contemporary internet culture—connectivity, and burnout from being over-connected: “Cats can do whatever they want and still charm their owners. That’s why they’re so captivating.” Surprisingly, the People’s Daily editorial on empty-nest youths agreed, likening felines to a projection of the millennial ego: “Cats don’t need to be walked, are never clingy, and are nocturnal…these habits fit well with youths who continually call for independence, stay up late, and lead a non-traditional life.”

On the other hand, “Cats usually won’t spare a glance for anything around them, including their owners. Young people adopt such proud attitudes to express their own feelings.” The fact that millennials are spending their leisure hours fondling real and virtual felines—instead of socializing, getting married, or buying a house—is unpalatable to a state keen to ensure stability and educate the next generation in socialist values. “The process of raising a ‘cat in the cloud’ is more about young people communicating with themselves, rather than interacting with cats,” the newspaper ultimately concluded.

Cat-lovers like Chi scoff at the moral panic. “They always try to make us out to be pathetic,” she says, but “there’s no complicated theory” behind her—just the love of a soft, furry companion on her lap. As Yuan observes, “At first, [my] customers knew nothing about the cats, but now many can name different breeds.” Or as a satirical meme for cat-lovers puts it, “Sniff a cat once, and spend your whole life trying to quit.” 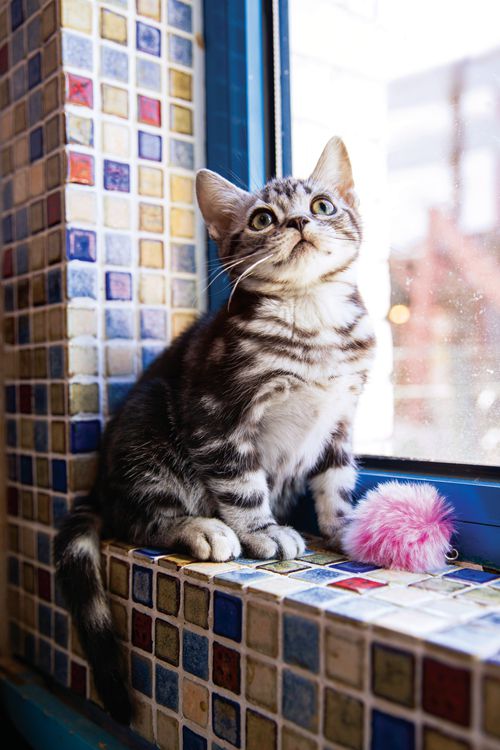 Tails from the Crypto is a story from our issue, “The Noughty Nineties.” To read the entire issue, become a subscriber and receive the full magazine. Alternatively, you can purchase the digital version from the App Store.