Yang Bingyang (Ayawawa) does not seem to be having a good month.

First, the writer and internet celebrity, who has more than three million followers on Weibo, claimed on May 18 that “comfort women” during World War 2 were proof of women’s “gender advantage”—because they were raped and “not killed.” Then, as netizens began to roast her for these disrespectful remarks, Yang dismissed her post as a “silly mistake” and warned that a “water army” of haters was trying to ruin her reputation.

New information, however, has since emerged to reveal that Yang is the supposed “Chief Relationship Expert” of a well-known online Beijing-based PUA society called Paoxue Wang (泡学网, How to Pick-Up). The website calls itself the “origin of Chinese pick-up culture and the gathering place for mainstream PUA.”

PUA societies claim to help men build confidence and to approach women they are interested in by teaching them certain skills, along with supposed insight into female psychology. A 2016 article in ChinaFile detailed in length how Chinese companies encourage subterfuge in pursuit of seduction, and exposed the seamier side of the business, from misogyny to rape culture. Now, an investigation by the Beijing News is reporting that these “gathering places” also teach how to successfully cheat on their partners and manipulate people in order to get laid—or paid.

According to the newspaper, many PUA sites, including Wechat, and QQ groups, contain lessons linked to seduction, swindles, and marital fraud. Members call women they are cheating on “prey” and “pets,” and PUA organizations advertise their courses by showing off “gifts” their students have supposedly obtained from grateful women.

After signing up for a course, a “mentor” provides videos and readings for the classes, as well as an online package of images featuring luxury cars, expensive liquors, pets, private jets and tours around the world. As part of a particular lesson called “Personal Image Transformation,” students use the stock images to make up their own social-media profiles, many of which also falsify their names, ages, occupation, and even life stories to attract women. Mentors advise students to “spray and pray:” “You must have more than three targets,” one PUA told The Beijing News. “That way, you have a higher success rate.”

As the course progresses, the mentors offer psychology lessons, teaching their students how to manipulate women using something called a “Five-Step Trap.” Students are also taught to squeeze money from their victims, and even how to use violence to conquer women.

Xiaohongmao founder Kong Weiwei told the Beijing News that over 150 women have sought help from the organization in its two-year existence. Some were depressed, some had STDs, some were being abused and some of had been financially swindled—and later became examples flaunted by PUA groups.

“A lot of [the women] are inexperienced students; some are recent graduates. They have no guard against the well-designed traps that PUA set for them,” Kong said. In a follow-up report, Lin Chen, a PUA student who successfully asked out a girl just eight hours after adding her WeChat, told the paper he used the“Five-Step Trap”: “[Psychological manipulation] is like a skill that you can learn repeatedly, it’s very specific. But the guilt is so strong, I don’t know how to love anyone anymore.” He said he’d dated 10 girls in a very short period of time, and when appeared outside his hotel, naked and threatening to kill herself, “That was when I knew I’d gone too far.”

The Beijing News’ second report notes that PUAs can also target men. A WeChat subscription account called LIAOKAIZI666 (撩凯子, Flirting with Rich People) encourages women to sign up for courses, which start at 4,999 RMB online and cost 30,000 to 80,000 RMB offline, to learn how to attract rich men. One student claimed that she earned 290,000 RMB in just one month from classmates and admirers. Another student posted the deeds to a new property given to her by her new boyfriend. The world of PUA already has a rotten reputation in the West—it seems that the version with Chinese characteristics is arguably even worse. 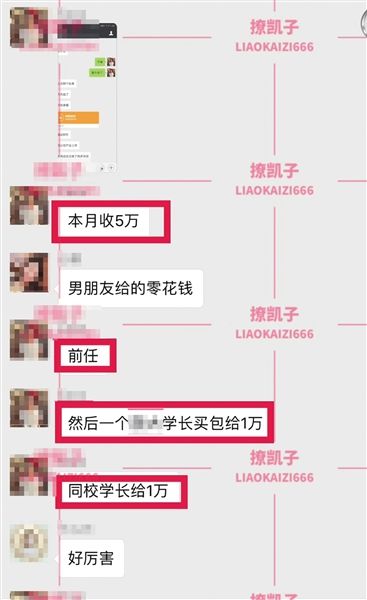 LIAOKAIZI student boasts that she earned 50,000 RMB this smonth from her ex and 10,000 each from other students