Mobile payment may be growing in popularity and convenience, but WeChat Wallet user Mr. Huang found that, when things go wrong, there is still hell to pay.

According to Xinhuanet, on May 2, Huang, from Zhongshan, Guangdong province, tried to transfer 87,500 RMB (13, 106 USD) to his cousin. Instead, the large sum went to an acquaintance with a similar username as the intended recipient; the payee refused to return the money and instead blacklisted Huang.

Calls to Tencent’s customer service, local police, and local court all failed to resolve the issue, highlighting two major flaws in China’s mobile payment systems: The absence of a mechanism to recall payments, or checking the payee’s personal information. These problems exist on both WeChat and Alipay—yet Tencent and Ant Financial, the respective parent companies, are happy to collect and use their users’ personal information, deny they keep confidential records on file, and will decline to share them with other users like Huang—due to “privacy policies”— unless ordered by a court.

Users have good reason to be concerned. First, on WeChat, one can easily collect a host of contacts in a short time, without knowing if the other person is trustworthy—or even who they are, especially if added by other users in a WeChat group, or by using features like “Friend Radar,” which automatically search for and add WeChat users in one’s vicinity. Since users are allowed to display nicknames, and keep their true identity concealed, it can be difficult to distinguish one WeChat friend from another, especially those using similar inspirational quotes or memes as their usernames or profile photos (you know the type).

When users send a WeChat hongbao or make a transfer, the payment page simply shows the last character of the payee’s given name with the rest represented by asterisks (e.g. **君), and the money is directly taken from the payer’s WeChat balance or bank card, once the PIN is entered and if the payee accepts the money within 24 hours. The default 24-hour wait can be shortened to two hours or “immediately”—but in any case, payment done cannot be recalled once done. 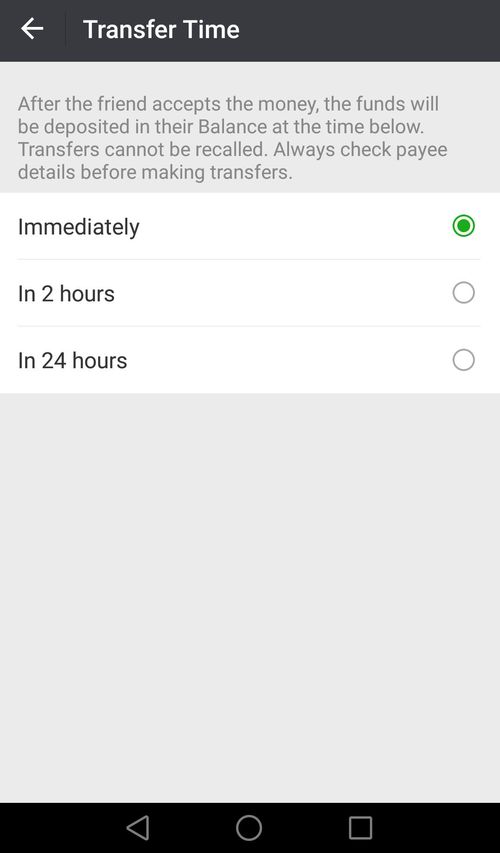 Alipay transfers work in a similar way, except that its page shows the given name of the payee, and requires the payer to type in the surname of the payee (if it is a first-time transfer). However, this isn’t necessarily foolproof: Ms. Liu, a 24-year-old white-collar worker in Beijing, told TWOC that she once made several wrong payments by mistaking one friend for another: Both shared the same given name and she had sent both money at least once before. According to the FAQs on both Alipay and WeChat’s payment platforms, there are no current methods for recalling a wrong payment on either platform, except negotiating with the payee and counting on their goodwill—or suing them

This is the option that lawyer Xu Guilin, in an interview with Xinhua, says Mr. Huang should consider. Xu pointed out that, though the mistake originated from Huang, WeChat must do its share to protect users’ legal rights. Huang can sue WeChat, so that the court can order the company to release the payee’s identity; Huang can then sue the cheeky payee. Last week, TenCent told Beijing Youth Daily that they were assisting Huang with collecting evidence for his lawsuit, and the police have stated that payees’ refusal to “return the improperly obtained benefits” counted as a crime.

Beijing Youth Daily has compared WeChat and Alipay payments with bank transfers by mobile phones, ATMs, or in person at the bank counter, concluding that bank transfer seemed safest, since the real full name and account information of both parties are used. As many customers know, if the payer provides even a slightly mismatched name and account number for the payee, the transaction fails (also, the paper surmised, the bank, police, and courts may be more inclined to help in case of a wrong payment).

A document issued in 2016 by the People’s Bank of China, aiming to strengthen payment management and prevent cybercrime, stipulated that delayed ATM transfers can be recalled within 24 hours if the payer reports it to the bank in person or by phone; all accounts opened with non-banking payment institutions shall be registered under the account-holder’s real name. Even so, the document did not provide details on how wrong payment or swindles are managed on these platforms.

In the meantime, cases similar to Mr. Huang’s are numerous, and often face mixed results results. Hainan police officer Li Bencong told Haikou Daily that, in accordance with General Provisions of the Civil Law of the PRC, money obtained without legal bases is considered bùdāng lìyì (不当利益, “benefits obtained improperly”) and should be “returned to the party suffering losses.” In 2017, a Ms. Wang encountered the same situation as Mr. Huang and was advised by police to use legal means to open an “economic dispute” with the payee, who had blocked her on WeChat.

However, the same year, a Ms. Zhang in Hunan said that the amount she may spend suing the wrong payee would far exceed the 3,000 RMB wrong payment she originally sent.

Meanwhile, netizens have offered their own solutions, both serious and tongue-in-cheek:

In my experience, wrong payments can be recalled in two ways: first, get a foreigner to file a police report, and second, seek help from an honest hacker, then call the police

If the policemen pay a friendly call to the payee, it won’t be so complicated

Hahaha, there’s no means to get [the payee’s] personal information? That’s because they did not publish a rumor online

Real names have been required for WeChat account registration for ages, so why can’t users recall mistaken or scam payments after reporting to the police?