Viral Week is our weekly round-up of the weekend’s trending memes, humor, rumor, gossip, and everything else Chinese netizens are chatting about. Think of this instead of melting arctic ice caps.

A toddler from Changzhou, Jiangsu province, has miraculously survived a fall from a 17-floor apartment with only minor injuries.

According to reports, the girl’s grandmother had left the sleeping 2-year-old alone at home while she went shopping. When the girl woke, she went to the window, lost her balance, and plunged from the 17th floor. Witnesses report that the girl got up almost instantly after hitting the ground, and ran back inside in tears. Later, an examination at hospital showed no  abnormities in the toddler’s CT scan, and only minor fissure to her ribs and bruising to the liver, according to x-ray and ultrasound. 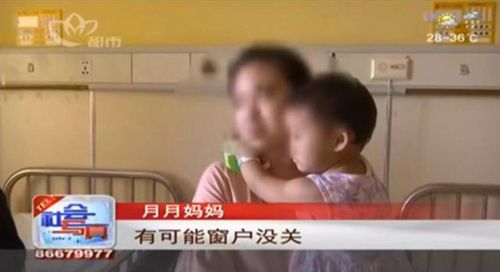 The apparent miracle has been attributed to the girl’s fall being cushioned by branches of the trees she fell through, and the grass she landed on being softened from the previous night’s rain. Still, given that the summer news cycle is usually full of stories about children falling out of open windows, often when left alone by overburdened grandparents, the media is urging parents and guardians to make their house childproof, and not count on blind luck in future.

Sea cucumbers are melting en masse off the coast of Dalian—one of many effects of the summer’s record-breaking heatwave in the northern hemisphere.

According to local farmers, sea cucumbers can be raised in maximum water temperatures of 32 degrees; any higher, and they will simply turn to gel and die after 48 hours. Since late July, Liaoning province has recorded a daily average high of 35.6 degrees, with some areas reaching 40 degrees.

Most small sea-cucumber farms in the area have already experienced total crop failure, reports CCTV; one farmer say he has been fishing out 1,000 kg of dead cucumbers every day. On the whole, close to 6.9 billion RMB is expected to be lost by the sea cucumber industry, which raises the marine animal for high-end dinner tables and Traditional Chinese Medicine.

A video of five tourists getting hit and verbally insulted by a driver armed with a metal rod has gone viral, notching almost 20 million views over the weekend. The tourists were trying to take a picture with the scenic desert of Gansu province as their background, by crouching in the middle of the highway—narrowly missing getting hit by passing cars.

The angry driver got out of his vehicle and hit the only male member of the group, asking, “This is the last picture you want to take in your lives?” Some rushed to praise the driver and chastise the artistic youths:

“Why do I feel so good after seeing what the driver did to them?”

“Morons, they still think their pictures are so artsy”

Others, however, criticized the driver’s aggressive behavior:

“So it’s OK for the driver to just get off the car with a rod, scare women, punch and kick someone? Blocking traffic is annoying but who gave this driver the right to hit people with a rod?”

No officials actions are reported against either the driver or the tourists.

A clash of civilizations

The video of a Dongbei driver, calling himself “Daddy” while heckling a Beijing cyclist he’d just hit with his fancy(!) Toyota —“While we outsiders are driving cars, you poor Beijingers are still riding crappy bikes!”—was enough to inspire a mob of irate locals to march on the Fengtai district police station, where the man was alleged to be held.

After video of the incident was shared on WeChat, the 35-year-old Liaoning resident was also soon besieged by enraged Jingers online, demanding justice and calling him a less-than-kind word. Regional prejudices in China tend to bubble up easily, especially in urban areas with large migrant populations. Northeasters are considered particularly crude and brash.

The cops are unable to let the driver go, while the desperate man, seeking to appease the bloodthirsty crowds, publicly resigned from his job, apologized, and begged human-flesh-searching netizens to leave his family alone.

Last week, a photo of two old men playing Chinese chess through a heavy downpour inspired many to applaud their dedication to the game.

Though soaked through, the two men, surnamed Yue and Zhao, later told media that they didn’t run for shelter because they had not yet decided on a winner, having agreed to play the best of three games. Unfortunately, they also claim to have forgotten the actual final result. Perhaps adding a downpour will make Chinese chess worthy of inclusion in the Olympics? Chess-inspired idioms for strategizing and winning