There’s little love lost between Jack Ma and Richard Liu, but the drama of the last two weeks have cast the rivalry in different lights

At last week’s China-Africa summit, Alibaba CEO “Jack” Ma Yun stole some limelight by inviting foreign leaders to Hangzhou as an unofficial businessman-diplomat, prompting some unflattering comparisons on the net:

Liu Qiangdong, better known to some Western readers as Richard Liu, is the CEO of JD.com and Alibaba’s greatest rival, at least in Liu’s eyes. The two tech billionaires have long had a tetchy public relationship, sniping over business practices and throwing shade in the battle for zero-sum dominance—but the last two weeks has now cast the two in a sharp and definitely differing light.

Having played genial host for overseas investment last week, Ma made the surprise announcement over the weekend to step down as CEO in one year, and suggested he intends to devote his future to leisure and philanthropy rather than profit (having once claimed he regretted starting Alibaba and was happier as a poor teacher, Ma also said he’d rather die on a beach than in an office, endearing him to embittered workers who feel much the same).

Liu, meanwhile, was arrested then released on sexual assault charges (that later turned out to be a rape charge) earlier this month after a boozy evening out at the University of Minnesota, where he is a part-time mature student, and saw his share value drop 16 percent. (It was here that Liu met, and later married, his wife, the former internet celebrity “Milk Tea Sister” Zhang Zetian.)

While both are known as scrappy bootstraps entrepreneurs, there seems little love lost between the two. 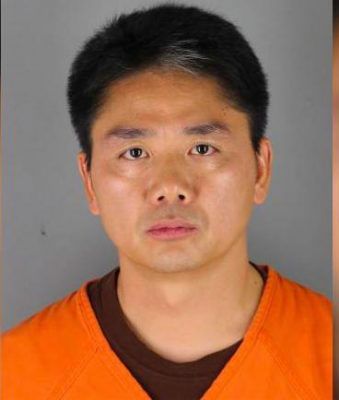 The feud dates back to at least 2015, when Ma told the authors of an Alibaba book that “JD is not going in the right direction. There is nothing anyone can do about it…definitely don’t get involved with JD. Don’t come blaming us if you die.” After publication, Ma apologized and said his comments had been off the record and taken out of context, but Liu has not forgiven him—nor his rival’s success. At a dinner of tech billionaires in Ma’s hometown of Hangzhou in 2017, a famous picture was posted online showing the Alibaba chief to have been snubbed.

Compared with Alibaba, JD has been featured in the Fortune 500 list longer and enjoys position some 200 places higher than its NASDAQ-listed rival. However, it has a fraction of Alibaba’s active customers, sells one-tenth as many goods, and has only turned a profit on one quarter. JD’s main assets are its infrastructure and logistics networks, while Alibaba mainly serves as a platform for e-commerce.

Now, as Ma prepares for a Bill Gates-like future of jet-setting charity work, education, and family bliss, Liu seems to be filling the role of Steve Jobs—his private life the subject of shady rumor, his public image looking embattled, and returning to Beijing under the rap cloud (still under investigation), as investors and managers fret at the lack of the clear lieutenant that Ma has appointed at Alibaba. As Chinese companies (particularly ones built by single personalities like Ma and Liu) tend to be ruthlessly hierarchical, “to remove the top executive is to cut the head off the snake,” as the saying goes.

Netizens, though, seem to have picked a clear winner in the tech battle of personalities, and it’s more bad news for Liu…

On September 9, Pear Video posted a video clip on Weibo showing the interiors of the offices of several top businessmen, and how the tycoons themselves described their offices on talk show A Date with Luyu (鲁豫有约).

[#Inside the “Big Seven” of magnates’ offices#: Wang Jianlin’s is the most luxurious, Ma Yun’s has the most personality, and Liu Qiangdong says his the simplest] The office a magnate works in most of the time is closely related to his personality and style. What are there in the offices of  bosses like Ma Yun, Liu Qiangdong and Li Ka-shing? Wang Jianlin collects various famous precious artifacts; Ma Yun loves Jin Yong [Louis Cha] novels, and calls his office “Taohua Island” (桃花岛) and the conference room “Guang Ming Ding” (光明顶)…

The comments quickly went in for the kill:

Brother Dong [Liu] says his [office requirement] is the simplest: one bed is enough

And he requires a female college student. A bed and a woman, that’s enough.

Can even Dongzi [Liu] be said to be low-key? He cannot stop trolling Ma Yun for a few days. He once even said that Alibaba can only survive by imitating JD. [Now] Ma is stepping back from Alibaba’s daily operations, while Brother Dong is trapped in his control over the company

Generally, netizens characterize Ma as sincere and relatable, and Liu to be an insecure braggart:

Ma Yun probably resembles characters in Louis Cha’s novels, who grow from being a common person to legends. after learning from the ups and downs in their lives. And this might be one of the reasons [Ma] loves Louis Cha novels

Ma Yun is much more sincere. Liu Qiangdong’s description of himself is very hypocritical

Liu Qiangdong is the person who should be leaving [his company]

After ifeng Finance wrote about Ma Yun’s intention to step down, along Liu Qiangdong’s refusal to leave his CEO position on September 10, the comments continued:

Ma Yun has devoted himself to developing internet-based companies and won a good reputation. Liu is addicted to women and gaining fame by creating media frenzy

[Do they] argue? To be frank, it’s Liu Qiangdong who has found trouble with Ma. Ma Yun never pays attention to him

Another post discussed Liu’s immediate return to work, comparing it with Ma’s intention to retire and teach the world. Some defended Liu’s decision, hinting at conspiracy theories that have long swirled around Ma and his relationship with Beijing:

Ma Yun could not get away clean and clear. He will fall [from grace] sooner or later. Obviously, Liu Qiangdong was set up this time. Oh, how easily men fall at one wrong step

Liu Qiangdong is still young. Why should he leave the business empire he established?

Liu Qiangdong has also made contribution to the society. This cannot be denied and forgotten completely