Rural children born in China during the 1970s and 80s can perhaps recall standing at grandma’s elbow as she cooked steaming rice over firewood, hoping she’ll let them scrape the pot if they behaved—a childhood tradition similar to Americans “licking the bowl” of a cake mix.

Growing out of the Chinese custom of letting no food go to waste, the guoba (锅巴, “cooked rice crust”), also called guojiao (锅焦, literally “pan scorches”), jiaoguoba (焦锅巴) or fanjiao (饭焦, “overcooked rice”), is the crispy layer of slightly scorched rice that clings to the bottom and sides of the cooker or wok. With its tantalizing aroma and chewy texture, it was an improvised treat at times when candy and packaged snacks were out-of-reach luxuries.

Some people have tried promoting guoba as “Chinese potato chips,” but this nickname doesn’t do justice to the snack culturally. Guoba has been consumed since the Jin dynasty (266 – 420), according to A New Account of the Tales of the World (《世说新语》), a compilation of character sketches and anecdotes from the first to the sixth century. In one story, filial army officer Chen Yi of the Wu State hoards crusts for his mother, a guoba lover, until a sudden war sends his army scurrying into the mountains, when he learns to survive on guoba.

Afterwards, guoba’s status rose as it became a staple additive to soups and other dishes. It reached its zenith under the Qing when the Qianlong Emperor, who liked to disguise himself as a commoner and go on inspection tours of the realm, visited a small restaurant in Wuxi. The owner slapped together a broth made of leftover shrimp and chicken, and poured it over guoba to serve. The surprisingly tasty result, xiaren guoba (虾仁锅巴, “shrimp kernel guoba”), was declared “the number one dish under heaven.”

The basic recipe of today’s xiaren guoba remains the same: First, small shrimp is seasoned with cooking wine and salt, mixed with egg whites, and fried with green peas, corn, and carrots. When the mix is golden-brown, tomato sauce, sugar, and water are added to form a broth, which is cooked for several minutes, then poured onto guoba (either store-bought or home-made). When the boiling broth hits the crispy crust, it makes a sizzling sound described as 平地一声雷 (“a sudden sound of storm on ground”), which is another name for the dish itself. It’s best enjoyed quickly before the guoba goes soft.

Although Jiangsu province has its emperor story, several other places claim to have their own unique version of the snack, including Sichuan’s sanxian guoba (三鲜锅巴, “guoba with three delicacies”) and spicy guoba roupian (锅巴肉片, “guoba and sliced meat”), and Zhejiang’s fanqie xiaren guoba (番茄虾仁锅巴, “guoba with tomato and shrimp meat”). The essentials remain the same: different kinds of soup sizzling over the humble detritus of rice. 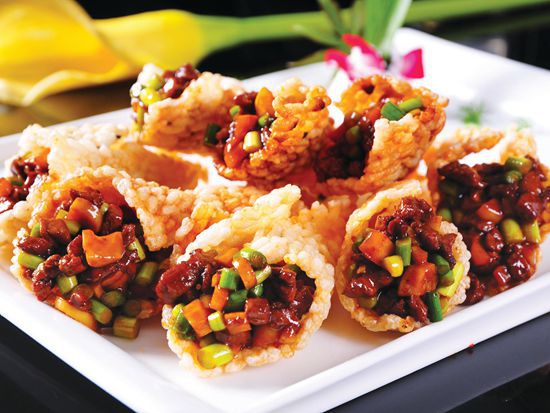 Currently, the most searched-for guoba brand on Taobao, Wolong Guoba (卧龙锅巴), boasts a “handmade” version using wood-fired ovens, like the artisanal potato chips found in Whole Foods. Based in Xiangyang, Hubei province, the hometown of the legendary strategist Zhuge Liang (诸葛亮), the brand has cashed in on yet another locality’s guoba folklore: Supposedly, Zhuge’s wife “invented” the snack when she could find no other food to serve the visiting lord Liu Bei. What was once a leftover, an unwitting dish for an emperor, and a childhood treat has become a multi-million-RMB snack industry; the taste has diversified, the recipe is disputed, and only the memory remains.

Rice, Crispy is a story from our issue, “Curiosities and Quests.” To read the entire issue, become a subscriber and receive the full magazine. Alternatively, you can purchase the digital version from the App Store. There’s a snap and crackle in the air, when the popcorn man is in town