Red socks, a turtleneck sweater, and several pastel-colored dishtowels hang from a clothesline in the hollows of the windows. Tall curving sugarcanes peek out from a basket, next to braided Calrose Rice bags and Tiger Balm from Cuba.

All are household items that can be viewed on the second floor of Pearl River Mart, a Chinese-American department store in Manhattan, not for purchase, but as part of a new visual exhibition, “Homeward Bound: Global Intimacies in Converging Chinatowns.” 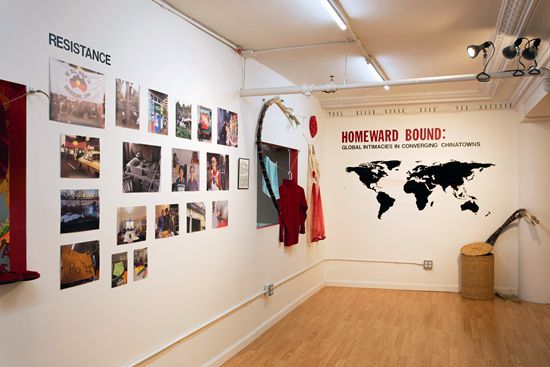 “Resistance” is the first section that visitors see in the exhibition

A culmination of four years of research and documentation by New York University assistant professor Diane Wong and Huiying B. Chan, a community organizer and multimedia storyteller (and occasional TWOC contributor), the exhibition follows the pair’s travels around the globe as they retrace the migration routes of Chinese “coolie” laborers in the 19th century. Oral histories, photographs, and everyday objects are arranged to evoke scenes from homes, family businesses, and community spaces of Chinatowns on every continent, from Vancouver to Lima, New York City to Havana, Kuala Lumpur to Ho Chi Minh city, Sydney to Johannesburg.

On a large world map dotted with tacks, red string—symbolizing fated encounters in Chinese culture—link all these disparate locations to China itself. “No matter where you are in the world, narratives are connected,” Wong explains. Though the curators had both grown up in first and second-generation Chinese homes in New York City, Wong and Chan’s paths converged at a meeting held by the Chinatown Art Brigade, a collective of New York artists and activists fighting against gentrification. Wong has spent six years doing ethnographic research on small business owners as they tried to resist gentrification in the New York, San Francisco, and Boston Chinatowns; Chan, meanwhile, spent a year visiting Chinatowns in eight countries around the world, interviewing members of the diaspora about what it means to be Chinese in their country.

In Havana—where Afro-Cuban Chinese elders are photographed in a beginner Mandarin class, frowning studiously over their textbooks—Chan had found empathy with these fellow second-generation immigrants, despite their language barrier and limited access to China. “We shared a connection of wanting to know our roots and the migration history of our people,” Chan said. The commonalities among these different global Chinese communities are organized into five themes corresponding with five sections of the exhibition: resistance, rooting, home, livelihood, and change. Photos of dragon’s bead candy, street protests, and Lunar New Year parades with rainbow confetti repeat themselves across different sceneries and under store awnings in different languages—as do scenes of deserted shops and restaurants, for-rent signs, and classrooms where dwindling populations of elders try to hold on to their heritage against forces of gentrification and assimilation. 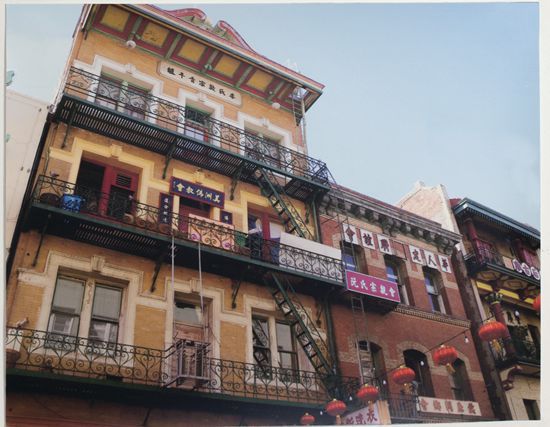 Buildings with recessed balconies, found in many Chinatowns, reflect architectural styles from Guangdong

One of the central points of the exhibit is a dress made from a 100-pound rice sack with red lining on its sides, embellished with tasseled flowers. The display is accompanied by a letter and photograph showing its owner, San Francisco researcher Dorothy G. C. Quock, wearing the dress. As Quock writes, her father had delivered bags of rice during the Great Depression, while she learned to sew in pre-school when her mother brought her and her siblings to the sweatshop where she worked: “I…get to wear clothes from the people who are significant in my life. It reminds me of them, [and] I feel their spirit is with me.”

“Connections are everywhere, and it’s our responsibility to be able to work with them,” Wong says. “Nothing in school [is] ever taught about the histories of Asian immigrant communities.” Even when people’s homes and livelihoods undergo change, the exhibit seems to say, identity is never lost, but adapts as time passes.

Around Towns is a story from our issue, “Home Bound.” To read the entire issue, become a subscriber and receive the full magazine. Alternatively, you can purchase the digital version from the App Store.

Donna Karimi is a contributing writer at The World of Chinese.