Smaragdova Zahrada is an odd oasis in the center of Prague. A stone’s throw from the Mozarteum concert hall, a pair of Art Deco iron gates lead to a subterranean shopping mall. At the bottom of the steps, one is greeted by life-sized painted statues of the monk Tang Seng and his apprentices from Journey to the West.

One of dozens of Chinese restaurants, or čínská restaurace, in the center of Prague, Smaragdova Zahrada, Czech for “Emerald Garden,” is owned by Wang Chunhong. He has streaks of grey hair peppering his temples and is gregariously hospitable. It’s a slow afternoon when I walk past the entrance, and he shouts out the traditional Chinese greeting: “Have you eaten yet?”

In 1997, Mr. Wang borrowed 200,000 euros and moved from Qingtian county, Zhejiang province, to open Smaragdova Zahrada. It took two years to start earning money, but now he has his own apartment and car, and grandchildren born in Prague.

Chinese migration to the Czech Republic began prior to World War II, many arriving as traveling salesmen from Wenzhou, Zhejiang province. Some fled to Western Europe after 1949, when the Communists confiscated their businesses. The population swelled dramatically in the 1990s as China loosened travel restrictions; as many as 9,000 entrepreneurs and import-export traders, mainly from Zhejiang and Jiangsu provinces, arrived and, in some cases, settled. In 2017, the Czech Statistical Office counts 6,885 Chinese nationals in the Czech Republic, with 4,374 holding permanent residence.

As residence permits in the EU’s Schengen Area have become more desirable, the Czech Republic has tightened its immigration policy in the last decade. Meanwhile, Mr. Wang’s business has flourished as Chinese tourism to Prague has skyrocketed, with a 38 percent increase of Chinese visitors between 2016 and 2017, totaling 491,648 Chinese visitors last year. At peak lunch hours, it seems, a tour guide marches in every 20 minutes with a colored flag and shouts a greeting to Mr. Wang, followed by an ensemble with floppy hats shading their faces and DSLRs slung over their shoulders.

Mr. Wang’s biggest obstacle at the Smaragdova Zahrada now is not a shortage of guests, but workers. He estimates that visa sponsorship for a Chinese national runs as high as 5,000 euros, paid by the worker. He has recently hired a Czech dishwasher, his first non-Chinese employee.

One of the bussers in Mr. Wang’s restaurant is Bian Shengjie, a young man in his 20s who arrived less than a month ago. Also from Zhejiang, he knew Mr. Wang’s family through his parents, who loaned him the money for passage to Prague. Dressed in a neutral black button-up, Bian has a penchant for taking selfies in funky glasses outside of work. 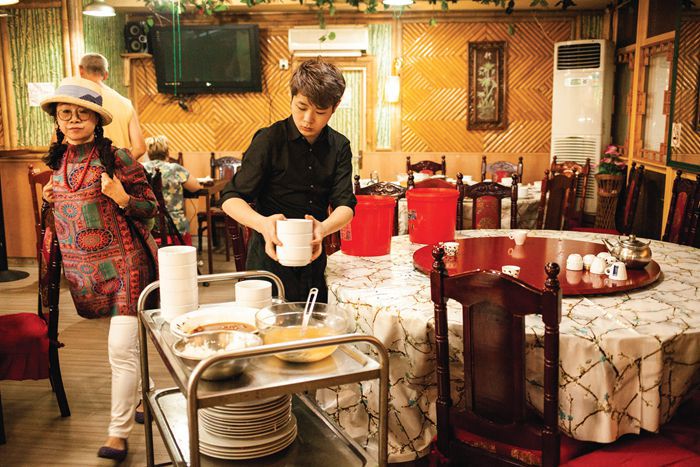 “I regret it, I really regret it,” Bian tells me, stacking dirty plates from a large table. “If I’d known what it was like, I never would’ve come.” He explains that by closing time (10:30 p.m.), he is usually dead tired and on a bus back to his boss’s apartment, where he also lives. He laments that at this time in China, his nightlife would have just begun. Meanwhile, in Prague, “I just swipe through my phone until I fall asleep. And then it’s back up at 7 a.m. next morning to go to work.”

Mr. Wang admits that he has trouble keeping workers for long. Three of his four Chinese employees have been with him less than a year. Bian is already trying to learn Czech as fast as possible so he can find a less grueling job.

Restaurant work is arduous work, consisting of being on one’s feet 12 hours a day, six days a week. While many Chinese once emigrated for manual labor—building railroads in the American West, working plantations in the Caribbean and South America, and opening restaurants almost everywhere—many of the younger generation want to study, enjoy leisure time with their friends, and pursue economic opportunities back home over overseas ordeals. The country Mr. Wang left behind two decades ago is not the country Bian left last month.

Despite the young man’s complaints that the laoban works them long hours, when the restaurant is busy, Mr. Wang stands at the cash register and wipes down dirty tables alongside his workers. He doesn’t sit down to eat his dinner until things quiet down, at 10:30 p.m. or 11.

Tonight, Mr. Wang is shoveling down a full plate of egg fried rice while counting up the cash. He tells me that he hasn’t taken a day off for 30 days. However, after business quiets down in October, he sometimes takes up to two months off.

“There is bitterness in hard work, that’s how it should be,” Mr. Wang says. He fills a glass from the boiling water tap and swerves, some water spilling onto his fingers. He puckers his lips for a moment and rushes on.

“Isn’t it past closing?” I ask a waitress who rushes past with vermicelli soup for customers just sitting down. She has already changed into her street clothes, a black sweatshirt and trendy cap, and tells me she is in the habit of running for her bus every night. She just smiles at me.

“Dobry den,” she greets another group that’s just walked in.

The guests have a full meal. Mr. Wang stays until they are done, and so do the staff. As a group of tourists pay, Mr. Wang comes over, all smiles, and reminds them to write a review on Dianping.com: “Say that the laoban stayed past closing time to serve us!”

On Dianping, “Cui Yuan,” as the restaurant is known in Chinese, has five out of five stars from 650 reviews, with the top recommendations being “good service” (199) and “good taste” (92). A reviewer from Wuhan wrote, “Touring Europe for 10 days, I couldn’t take the Chinese food here anymore…[the buffet] saved me!” The most recommended dishes include braised eggplant in fish sauce (yuxiang qiezi) and steamed chicken in chili sauce (koushuiji). One Chinese tourist on Google thanks Mr. Wang for allowing him to use the restroom as he walked by.

Meanwhile, on TripAdvisor, Smaragdova Zahrada has three out of five stars from 77 reviews, with 36 percent rating five stars and 42 percent rating one star. Some of the one star reviews include, “Terrible food, terrible service, awful atmosphere. There’s a Burger King opposite! Save yourselves!” and “Lots of mystery meats or whatever.” Nevertheless, regular Czech customers greet Mr. Wang with a shout and a wave when they enter.

As Bian hurries past with the cart of dirty dishes, he says, “The one good thing about working among foreigners is that you can curse at them, and they don’t even know it.”

Finally, around 11 p.m., the day is over. As we exit into the dazzling streets of Prague’s city center to the shouts of drunk tourists and the faint pulse of club music, the young man who washes dishes in the kitchen emerges for the first time, musing aloud, “It’s so dark.” He looks tentatively at me. “We barely see the sun in the morning, and it’s already dark when we go home.”

He glances up at a streetlamp and then down to his feet, where the cobblestones glisten with slivered edges of gold.

Emerald in the Rough is a story from our issue, “Modern Family.” To read the entire issue, become a subscriber and receive the full magazine. Alternatively, you can purchase the digital version from the App Store.