China’s ancient storytellers had no lack of imagination: from the fantastical fourth century BCE atlas Classic of Mountains and Sea (《山海经》), to the ninth century supernatural anthology Tales of the Marvelous (《传奇》), and numerous folk tales and legends in between.

One of China’s earliest folklorists (and brother of writer Lu Xun), Zhou Zuoren, disputed a common idea in the 1930s that ancient China did not have any fairy tales, naming The Miscellany of Youyang (《酉阳杂俎》) as proof. Written in the early ninth century by Tang scholar Duan Chengshi, this collection of legends, chilling ghosts stories, and notes on botany and zoology also contained many short stories that Zhou classified as fairy tales.

The most famous among them is Ye Xian, one of the oldest known variants of the Cinderella story. Here are translations of two others, out of over 50 fairy tales that modern literary scholar Wang Quangen has identified in the book. We hope you will enjoy, and perhaps retell them:

The King and the Dragon 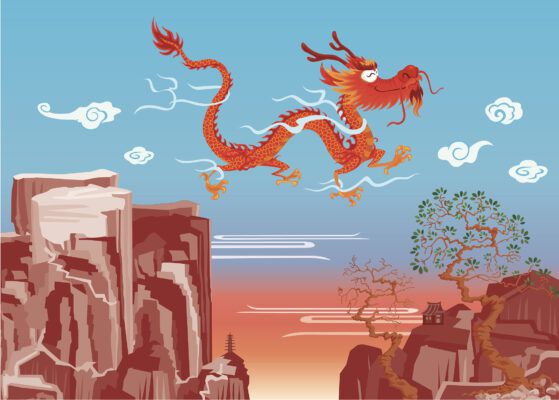 In the ancient kingdom of Kucha, there was a king named Azhu’er. It is said that he possessed extraordinary power, so strong that he was able to tame an evil dragon.

At the time, there was a businessman buying lots of gold, silver, and other treasures from the market. At night, store owners would discover that the money they had received from the businessman turned into charcoal. There were hundreds of families in the realm who lost their money that way.

Baffled by the strange events, the king consulted his son, a Buddhist arhat far advanced along the path of Enlightenment. The arhat told him: “This was the deed of the dragon. The dragon lives on the northern mountain. His head looks like a tiger, but he is asleep at the moment.”

On hearing this, the king put on his armor and drew his sword, marching to the dragon’s nest. The dragon was still sound asleep when he arrived. Just as he planned to slay the dragon, he thought to himself: “If I kill a sleeping dragon, who on earth would know of my extraordinary power?” So, the king shouted at the dragon and woke him up. The startled dragon jumped up and transformed into a lion. The king swiftly mounted the lion, who grew extremely angry, roared thunder, and soared into the sky and flew for miles to the north.

The king shouted at the dragon: “If you do not surrender, I will cut off your head!” The dragon was afraid of the king’s power and spoke: “Please don’t kill me! I will be your Majesty’s steed; wherever you want to go, I will carry you there.” The king agreed. From then on, the king often traveled around riding the dragon.

There was a noble man of high rank in the kingdom of Xinluo, named Jinge. He had an ancestor named Pangchi. Pangchi had a younger brother, who was very wealthy, but Pangchi himself begged for a living, and the two were estranged.

One day, a fellow countryman gifted Pangchi a small plot of land, so he asked his younger brother for some silkworm eggs and grain seeds to raise. Unbeknownst to Pangchi, his brother had killed the eggs and seeds by steaming them. Eventually, only one silkworm hatched. It grew every day at a terrific rate, and was as big as an ox after only ten days; the leaves from several mulberry trees could barely feed it.

Pangchi’s brother heard about this, and killed the enormous silkworm when he got a chance. The next day, all the silkworms within a 50-kilometer radius gathered at Pangchi’s place. People said this was because the dead silkworm was their king. All of Pangchi’s neighbors came to help reel in the silk threads, which were so abundant that they could barely manage.

Pangchi’s field also produced just one single stalk, but it grew a very long ear. Pangchi used to stand beside it and observe it. One day, the plant was pecked out by a bird, which flew away with the ear. Pangchi chased the bird all the way to the mountain, and a few miles even farther, until the bird flew into a cranny of a rock. The sun had set, and it was too dark for Pangchi to find his way home, so he had to spend the night by the rock.

At midnight, the moon shone brightly. Pangchi saw a group of children wearing red clothes playing games. One child asked: “What would you like?” Another child answered: “Some wine, please.” The child took out a gold awl, and hit the rock with it. Wine and a set of drinking vessels appeared on the rock. Another child asked for food, so the first child knocked on the rock again, and cakes, soup, and roasted meat appeared.

They ate and drank for a long time, and left the gold awl inserted in the rock when they had gone. Pangchi was overjoyed, and he took the gold awl home. From then on, whatever he wanted, he conjured it instantly by using the awl. Pangchi  soon became as rich as an entire kingdom. But he was generous, and gave his younger brother gifts of pearls from time to time.

The brother said to Pangchi: “Maybe I will get the same gold awl if I copy what you did.” Pangchi thought it was a silly idea and tried to talk him out, but failed.

The brother tried to hatch silkworms, but simply got ordinary worms; he tried to plant grain in his field, and a single stalk grew. A bird also came to carry its ear away. Pangchi’s brother was very excited. He followed the bird into the mountain.

He encountered the children in red as well, who turned out to be monsters. They shouted angrily: “This must be the awl thief!” They captured the brother, and told him: “You have a choice: Do you want to build us an eight-meter tall wall? Or do you want your nose to be pulled to a length of three meters?” The brother chose to build the wall. After three days, he failed at the task and was exhausted. He begged the monsters for mercy, but they still pulled his nose. He ended up with a nose like an elephant. When he returned, people found his appearance very strange and gawked at him. Ashamed and angry, he passed away soon after.

One day, many generations later, Pangchi’s descendants were playing around with the awl, and jokingly demanded it to conjure wolf feces. A bolt of lightning shot down from the sky, and the awl disappeared forever.