As Genghis Khan lay dying, he ordered his generals to take revenge on the people that killed him—and exterminate an empire without a trace

In the Liupan mountains, at the border between present-day Gansu and Ningxia, a thick forest blotted out the fading light of dusk. It was spring, 1227, and stone-faced Mongolian soldiers stood guard over the mountain pass.

Inside the Mongolian camp, the mountain wind was stirring the flaps of the largest yurt, surrounded by a thicket of guards. The shadowy figures of generals crouched over the wavering light of the candles in the yurt, looking helplessly upon the dying man in their midst.

The man was Genghis Khan. His forces had conquered more territory than any single army in history, expanding the Mongolian empire from the Pacific Ocean to the Black Sea. Just a month before, however, as his armies had pushed south, Genghis Khan had been shot with a highly poisonous arrow by the soldier of a mysterious dynasty; now, the cold, wet air of the Liupan range was hastening him toward death.

The flickering candles were almost out; as the life of the great intercontinental conqueror also burned to its last embers, the Khan delivered his last testament to the sons and subordinates who knelt before him:

As for the Tanguts, wipe them out.

Extirpate them. Exterminate them.

As Genghis Khan took his last breath, a secret order was sent out from the depths of the Liupan range to all the generals’ camps across the vast Eurasian continent. Even as the troops mourned, they chanted their Khan’s last wishes like a curse before every battle; the “Tangut” were not only the object of the Khan’s everlasting hatred and regret, but would soon become the target of his revenge from the grave. 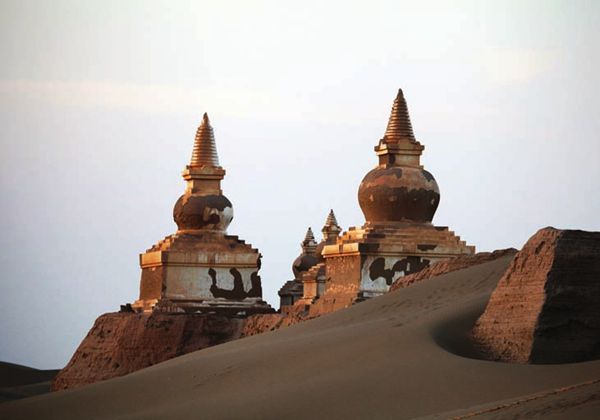 Khara-Khoto, in present-day Inner Mongolia, was a trade center under the Tangut later expanded by Kublai Khan

Thus goes the story of Genghis Khan’s last moments, as told in The Travels of Marco Polo. But just who were these “Tangut” that Genghis Khan spoke of? Was he referring to the race of people who killed him? In the history of China’s ethnicities, there was no group of that name. Could it be a powerful ancient empire? Reading the Twenty-Four Histories, a chronicle of China’s rulers from the prehistoric Yellow Emperor to the Ming dynasty, there is no mention of the name. Why did the Tangut disappear? Were they really wiped out by Mongolian troops? And what kind of historical traces did they leave behind?

The next mention of the Tangut appeared 50 years after the Khan’s death. In 1277, Venetian merchant Marco Polo crossed the frontier into modern-day China controlled by the Mongol Yuan dynasty (1206 – 1368). His objective was to find the city that Genghis Khan’s grandson, Kublai Khan, had built upon the grassland— Shangdu. When he entered the territory of Qumul (Hami) in what is now Xinjiang, he observed: “Qumul is a county within the Tangut province, part of the Khanate. There are many cities and fortresses within; the main city is known as Qumul.”

When he entered the Turpan area, he once again referred to the Tangut: “Next to Qumul is Taras [now Turpan]. To its north are wastelands; the entire traversal took 16 days. After I left Qumul, I went east and northeast for 10 days, passing through a sparsely populated area with nothing of note. I arrived at a place called Suzhou [now the city of Jiuquan in Gansu province]. There were a number of cities and fortresses within, with the main city called Suzhou…together, the three territories described are called Tangut.”

Entering the middle of the Hexi corridor, he came to Ganzhou (now Zhangye, Gansu), and wrote that “Ganzhou is the provincial seat of Tangut; it is quite large, and contains the governmental units for the whole province. Upon leaving Ganzhou, I traveled north for twelve days, to arrive at a city called Etzina [Ejin Banner, Inner Mongolia]. It’s located at the entrance to the barren desert, within Tangut.”

After leaving Ganzhou, Marco Polo walked for five more days, and arrived at Liangzhou (Wuwei, Gansu)—yet another city “within the borders of Tangut,” along with Alxa (now Inner Mongolia), and Yinchuan (now Ningxia). Altogether, these territories formed a large L-shape around 500,000 square kilometers. Was this the territory controlled by Genghis Khan’s mortal enemies? 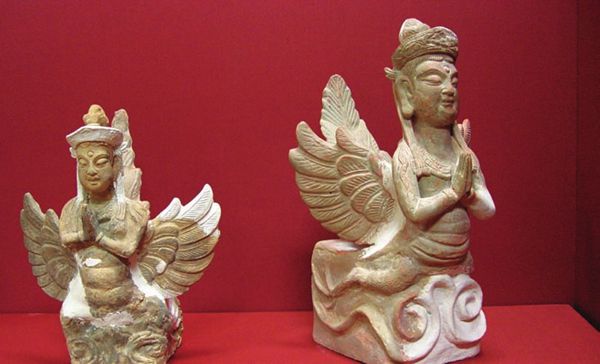 Marco Polo finally got the answer when he arrived at Shangdu, three years after he first left home. There, he sought an audience with the highest ruler of the empire, and described with interest the Tangut territory he had seen. He wondered about the origins of the Tangut province and just how vast the area was.

To the Mongols, Kublai Khan explained, “Tangut” meant two things: The first was an empire that had ceased to exist five decades prior, which stretched over the plains, rivers, and valleys to the Gobi Desert. Known as the “Grand White Empire,” or Xixia (Western Xia) to China’s Song dynasty, its territory was even larger than what Marco Polo had seen; at its height, it included the southeast of modern Xinjiang, the northeast of Qinghai province, the east of Gansu, and the north of Shaanxi.

The second meaning of Tangut was the people who lived within this kingdom, one of whom had shot Genghis Khan with the arrow that signed his people’s death warrant. Not long before Genghis Khan died, he sent a final imperial edict to the last emperor of the Tangut at their capital, located at the base of the Helan mountains in present-day Ningxia, and ordered him to come to the Liupan mountains to surrender.

Many centuries later, I tried to construct an outline of the scene, to explain what the Tanguts were thinking and doing when they received their death sentence from what was then the most lethal army in the world.

In the imperial palace in the Helan mountains, the last ruler of the Tanguts knew that the empire’s fate was sealed. He secretly called in his ministers and generals to formulate a plan that would allow the imperial family, at least, to escape: A lookalike of the emperor would carry the notice of surrender to the Mongol camp in the Liupan range, and pay respects to Genghis Khan. Meanwhile, a few generals, along with palace staff, craftsmen, and guards, would flee the capital with the real emperor under the cover of night. The fact that this plan succeeded—that their escape wasn’t discovered by the Mongol troops, which had fully encircled the Tangut territory by that time—is a source of mystery even today.

With the surrender in hand, the Mongol army proceeded to their checkmate. Riding into the Helan mountains, they laid waste to the capital in accordance with the Khan’s instructions. Soldiers were slaughtered, civilians fled, and every artifact was looted from the imperial tombs. The once-defiant kingdom was pushed into the recesses of time; “Xixia” became a mysterious footnote in Chinese history.

About the writer: Tang Rongyao is a historian, travel writer, poet, and philanthropist based in Yinchuan, Ningxia Hui Autonomous Region.

In early 2000, Tang developed an interest in Xixia culture, particularly the migration of the Xixia people after the fall of their empire to the Mongol conquerers. Tang has conducted in-depth research and traveled to over 20 provinces across China, searching for the modern descendants of the Xixia. He has published a series of history books and travel essays on the topic, including History of Xixia, Xixia Empire , and Fall of a Dynasty. All of the income from Tang’s publications goes toward building orphanages, schools, and village libraries in the Qinghai-Tibet region. He is currently traveling through the Qinghai-Tibetan Plateau to conduct research for a new book.

“Tracing the Tangut” is a story from our issue, “Curiosities and Quests”. To read the entire issue, become a subscriber and receive the full magazine. Alternatively, you can purchase the digital version from the iTunes Store.

Tang Rongyao is a contributing writer at The World of Chinese. Piqued by pop culture, China’s public is hungry for all things imperial