With Teochew opera blaring through crackling speakers and throngs of spectators gathered around him, Ly stands motionless with three sticks of incense raised to his forehead at the altar of the Sam Ourng Temple, waiting for his ah gong, or spirit, to possess him.

Within minutes, the usually soft-spoken, modest 23-year-old is transformed as he slams his hands on the altar table, and lets out a guttural cry, teeth bared and eyebrows furrowed. Ly surrenders himself to the spirit of the “White Tiger Marshall,” a Daoist deity who will “borrow” his body in order to bring blessings to eager devotees in Phnom Penh’s Chbar Ampov district for the lunar new year.

Taking place over the course of three days around the time of the Lantern Festival, which marks the end of Chinese New Year, the annual Hei Neak Ta, or “parade of spirits,” is a Cambodian cultural practice rooted in Daoism and Chinese folk religion. Brought to Southeast Asia by immigrants from southern China during the late 19th and early 20th centuries, the tradition of mediumship is still upheld today in Taiwan and some southern provinces on the Chinese mainland. 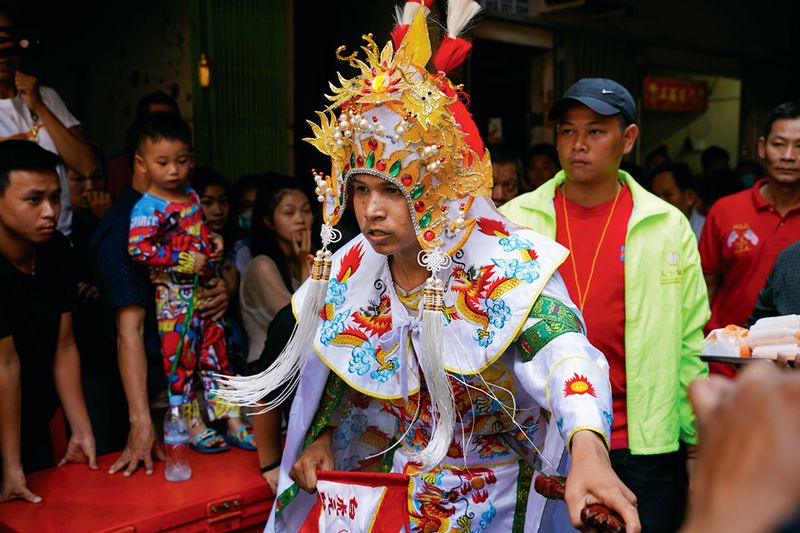 Costumes and headdresses denote the spirits that possess the medium

Known as neak snong roup in Khmer, and tangki (童乩) in the Teochew dialect, the mediums are seen as special members of the community who have been chosen to relay the intentions of revered spirits. Few to none of the over 100 mediums in Phnom Penh practice full-time, instead offering their services only during the festival and on select religious occasions, though some may be called upon to perform more mundane rituals such as warding off illnesses or blessing a business opening.

Many mediums claim to be possessed by spirits from Daoist and Buddhist mythology, including Qi Tian Da Sheng, who was popularized as Sun Wu Kong or the Monkey King in Journey to the West, and the youthful warrior Ne Zha. During the ceremony, mediums scrape their tongues until they draw enough blood, then lick yellow slips of paper known as hu—the Teochew word for fu (符), or amulet—which they give to devotees as a talisman for good fortune and exorcising evil spirits in the new year.

This year, the main street outside the temple buzzes with excitement as families crowd around tables of offerings set up outside their houses and storefronts. Children squeal and bow in prayer as the mediums approach and splash holy water on their heads.

Yet these streets also hold memories of darker times. “When the Khmer Rouge came, many of my cousins fled along this road,” Leang Chang, a second-generation Cambodian retiree of Teochew descent, says on a recent Saturday morning, gesturing to the street down which the lively spirit procession had passed just weeks before.

The Sam Ourng Temple was built with materials from China

When Leang’s parents arrived in Cambodia from southern China in the 1940s, they thought they had fled the worst of famine and political unrest. Soon, though, they found themselves in even more horrifying circumstances under the Communist Khmer Rouge regime, which carried out a brutal genocide of an estimated 1.5 to 2 million people between 1975 and 1979. Its emphasis on Khmer nationalism led to targeted killings of ethnic minorities in Cambodia.

Some Chinese immigrants managed to escape overseas before the Khmer Rouge seized power in April 1975, but those who couldn’t were sent to labor on communal farms in the countryside. Children were separated from their parents, and Leang heard harrowing stories of people being taken away—never to return—for speaking their native Chinese dialects.

It is estimated that of the more than 400,000 Chinese who were living in Cambodia before 1975, over half did not survive the Khmer Rouge regime. Even before this, in 1970, all Chinese schools, businesses, and temples in Cambodia were forced to close under General Lon Nol, who led the military coup against Prince Norodom Sihanouk and ruled for a brief period before he was overthrown by the communists.

Chinese businesses and institutions remained closed until the early 1990s, when the Paris Peace Agreements ended fighting between Cambodia and Vietnam. As their schools, businesses and temples started to re-open, the five main Chinese immigrant communities in Cambodia—the Teochew, Cantonese, Hainanese, Fujianese, and Hakka—also began re-establishing hometown and community associations. The Sam Ourng (三山国王, “King of the Three Mountains”) Temple in Chbar Ampov, dedicated to three gods in Guangdong province primarily worshipped by Teochew and Hakka people, was built in 1929 by Teochew immigrants, who comprise nearly 80 percent of Cambodia’s Chinese diaspora population. However, it fell into disrepair during the Khmer Rouge era.

The recent influx of Chinese investment and growing Chinese influence in Cambodia have led to an increasing interest in the study of Chinese language, and shifting attitudes toward Cambodians of Chinese descent. The Hua Ming School now enrolls over 1,200 students, up from only 800 two or three years ago.

The parade of spirits has grown too, with more than 130 mediums participating this year compared to 90 last year. Among them are a growing number of mediums who do not speak Mandarin or any Chinese dialects, though some claim to be able to speak them when possessed by a spirit. 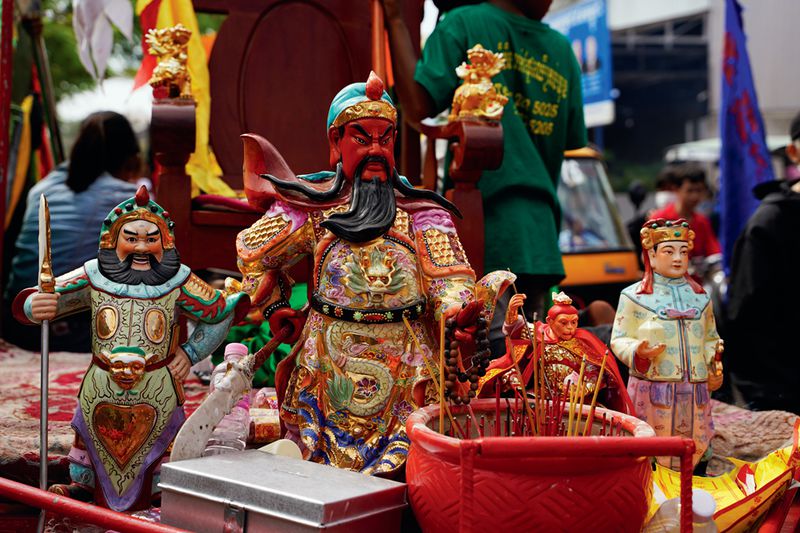 Gov Sok Heng, a third-generation Cambodian of Cantonese descent and vendor in Phnom Penh’s Central Market, remembers hearing stories about how the Khmer Rouge had tried to destroy a Chinese temple in Phnom Penh, but mysterious forces redirected the missiles away from the temple. “That probably scared some Khmer people into believing in Chinese spirits,” he chuckles.

Gov also speculates that as Cambodians of Chinese descent have become increasingly successful economically and politically in Cambodia, their Khmer neighbors have sought to emulate Chinese spiritual traditions in the hope of receiving some of the same fortunes. Khmer and Chinese have intermarried for generations; though some Cambodian-Chinese may no longer speak any Chinese dialects, many continue to honor their ancestral traditions by setting up altars for Chinese spirits in their homes.

For Heng Chou Ly, a second-generation Cambodian of Teochew descent and head of the Chbar Ampov Khmer-Chinese Association, these traditions are a way to remember his ancestors, and he’s glad festivities like the parade of spirits are gaining a wider, more diverse audience. “These traditions were brought over by our parents, and our hearts wouldn’t be at ease if we stopped celebrating them,” he says. “Now we get to see them take root and be carried forward by young people.”

The second time Ly was possessed, the spirit descended so suddenly and forcefully that the medium fell down and knocked out four of his front teeth. Still a teenager at the time, Ly was scared about having to draw blood from his tongue and initially resisted becoming a medium, but he feared the spirit’s “punishments” if he did not oblige.

The parade winds for many kilometers through the community

“It’s not something normal people can do,” says Sovannary Neang, a member of Ly’s entourage during the parade, a group of almost two dozen people who tend to the medium’s every need. They pull the cart he stands on, direct traffic as he weaves in and out of houses, and symbolically clean the path for the ah gong by spilling rice and spraying rice wine ahead of anywhere that the medium walks.

“We really respect [the mediums],” Neang says, “because they sacrifice themselves to bring happiness to others.” By the end of each day, Ly is drenched in sweat; his feet are swollen, and most importantly, he “must refrain from thinking evil thoughts,” adds Neang.

The Hei Neak Ta is also an opportunity for Ly’s friends and entourage, who are primarily third and fourth-generation Cambodian-Chinese, to serve others and find community. Despite the demanding three-day parade schedule, the group spontaneously breaks into song in Khmer, Mandarin, or another Chinese dialect during lulls in the procession. Neang especially cherishes the love and support she feels from the group, noting small gestures like being given a bottle of water by her cohorts without having to ask. “It feels like we are brothers and sisters,” she says.

Heng confesses that even his association, which organizes the parade, does not fully know how the spirit mediums operate. “We can’t tell if they’re real or fake.”

Nonetheless, the continued celebration of the spirit parade is an affirmation of a community and heritage that hasn’t always known acceptance and stability in a foreign home, and a comforting reminder of another year lived—and a new one to look forward to.

Spirits of a Kindred is a story from our issue, “Contagion.” To read the entire issue, become a subscriber and receive the full magazine. Alternatively, you can purchase the digital version from the App Store.

Cindy Liu is a contributing writer at The World of Chinese.