He Yide is not your average 12-year-old. In 2012, images of a 4-year-old He “training” naked in the snow in New York went viral on the internet.

Now, the boy is back in the spotlight after competing in science-themed reality show Super Brain, shocking the audience with a new achievement: He has already attended and graduated from Nanjing University.

The rest of Yide’s CV, which was published by Jiangsu TV, is just as astonishing. He climbed Nanjing’s Zijin Mountain at age 2, sailed in an international regatta at 4, piloted an airpline at 5, wrote an autobiography at 6, crossed the Lop Nor desert in Xinjiang three times by 7, and was three-time champion of a Beijing robotics competition by 9. But the boy’s intense training regimen has also invited criticism from mainstream and social media, while recent cases of families exaggerating or even faking their children’s accomplishments raised further questions about the pressure to raise child prodigies, or 神童 (“god-like child”), in today’s education system. 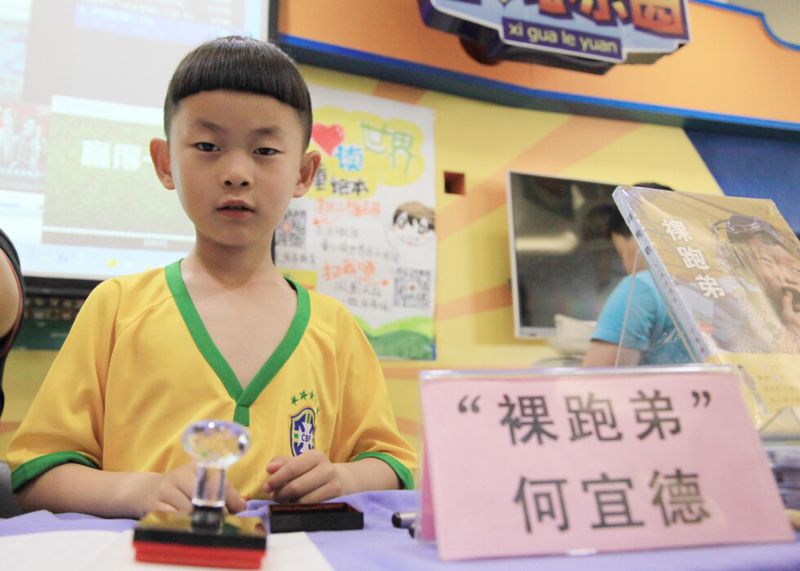 He Yide poses with his autobiography

Yide’s father, He Liesheng, is a self-described “eagle dad” who pushes his child to challenge his physical and mental limits in order to build character, comparing himself to a bird of prey that allegedly drops its young off of a cliff so they may learn to climb back up. According to He Liesheng, he “encourages and consults with” Yide about his willingness to participate in these activities, and his son is used to this intense schedule.

He Liesheng says he adopted these extreme methods, against the wishes of his wife and his own parents, because he was disillusioned with China’s exam-oriented mainstream education system. “[It] killed his thinking ability and creativity,” he told Lifeweek magazine of a test Yide took at school.

Whatever the motivation behind these child geniuses, the issue has gained popular and official attention. In 2018, the “resume” of a child hoping to gain entrance to a Shanhai primary school with an acceptance rate of just 1-in-133 applicants went viral online. “At three-and-a-half months old I could speak; at 1, I could express my desires; while travelling, I could chat with Americans in English about Medusa and Hercules,” ran one line.

An editorial in People’s Daily expressed concern at the trend of raising “super kids”: “A child’s education and knowledge deepening has it’s own sequential development pattern; we must not be too hasty.”

What’s more, not all child geniuses are as smart as they appear. Earlier this month, organizers of the Yunnan Youth Science and Technology Innovation Contest revoked the prize of sixth-grader Chen Lingshi, who won first place for a paper on colorectal cancer. Chen’s parents, both researchers, admitted to helping him with the project.

A number of similar cases have come to light recently: Two siblings in elementary school were investigated for their award-winning experiment on the effect of tea polyphenol on tumors, after the public raised questions about how the children obtained a certificate for experimenting on animals, and noted that their supervisor was a researcher working under their father, the director of a zoological institute.

Netizens also smelled a rat on a superhuman 16-year-old surnamed Cen, who can allegedly write 3,000 ci (epigraphs), 2,000 poems, and a 15,000-word novel a day; has published three books and started two businesses; and works as a journalist and motivational speaker. Cen’s name does not appear in the government’s database of registered journalists, and her father has clarified the books were self-published (though he insists the other achievements are real).

Even He Yide, it emerged, enrolled in NJU’s School of Continuing Education rather than its undergraduate course, though he was still the youngest student there. As a recent commentary in China Youth Daily noted in regard to science-fair winner Chen Lingshi, the race to produce prodigies not only encourages academic fraud, but favors families of means: “[Science competitions] have become a competition of children’s family background.”

Demand for places at top schools has long driven Chinese parents to push their young children to excel, and the avenues of competition are becoming more diverse. Professing a desire to reduce academic pressure on children, education authorities have been encouraging schools to emphasize courses in non-academic subjects and evaluate students in a more well-rounded way. In 2018, the department of education in Shandong incorporated art courses into the provincial high school entrance examination.

In practice, though, this simply added a new layer of competition, fueling demand for extracurricular training. “I don’t want my child to be worse off than other kids…society doesn’t only look at your [academic] scores, and arts training can help improve a child’s grades,” one mother told Sohu News on why she enrolled her child in after-school creative arts classes.

Liu Chunjie, president of Nanjing Art Research Institute, told Sina News that for children, interest and encouragement are very important in arts, and parents should avoid emphasizing results. “Overly focusing on results puts pressure on kids, and arts education will become a burden to them. It will limit their imagination and the joy of learning the arts,” he said.

But it seems that while China’s education system continues to rely on testing to determine school placements, and educational resources remains uneven between the biggest cities and the vast hinterland, parents will continue to have incentive to try to cultivate the next He Yide.