Chinese handset maker Transsion is the darling of Africa’s growing mobile market, but can it keep its lead?

Transsion wasn’t the first Chinese smart phone brand to make a foray into Africa, but you’ll be forgiven for mistaking it as such. In cities like Lagos, Nairobi, and Addis Ababa, busy streets are awash with shopfronts advertising Tecno, Itel, and Infinix, the Shenzhen-based phone maker’s three flagship brands.

It was an eye-opener for Mo Yelin, a Beijing-based journalist, when he visited Nairobi, the capital of Kenya, in September 2017.

“Before the trip, I had read about the popularity of Transsion’s phones in Africa, but it was still a shock seeing it with my own eyes,” he told TWOC. “Billboards with Transsion ads were everywhere throughout the city and multiple Transsion stores could be found on a single street.”

The company is virtually unknown to Chinese consumers, and its phones have no official sales channels in its home country. Yet it ranks second behind Huawei among Chinese phone makers, and fourth in the world, in terms of global smart phone shipments with 137 million handsets in 2019; counting feature phones, it soars to first place in the world. In 2019 alone, one out of two phones sold in Africa came from Transsion, beating both Samsung and Huawei.

“Transsion is indeed the ‘cell phone king in Africa,’” Mao Zheng, an analyst with Chinese brokerage New Times Securities, told TWOC. The continent is home to a growing population of more than a billion people. In Sub-Saharan Africa, the average GDP per capita in 2019 was 1,585 USD, according to the World Bank. Mao believes the market potential is huge, and Transsion carved out a niche with phones usually sold for between 15 and 200 USD.

Billy Williams, a YouTube tech gadgets reviewer based in Nigeria, agrees, noting that Transsion offers a slew of decent smartphones in the continent that wow customers with cheaper prices. Its “main selling [target] is Africa, and most Africans don’t fancy spending a lot on smartphones,” said Williams. 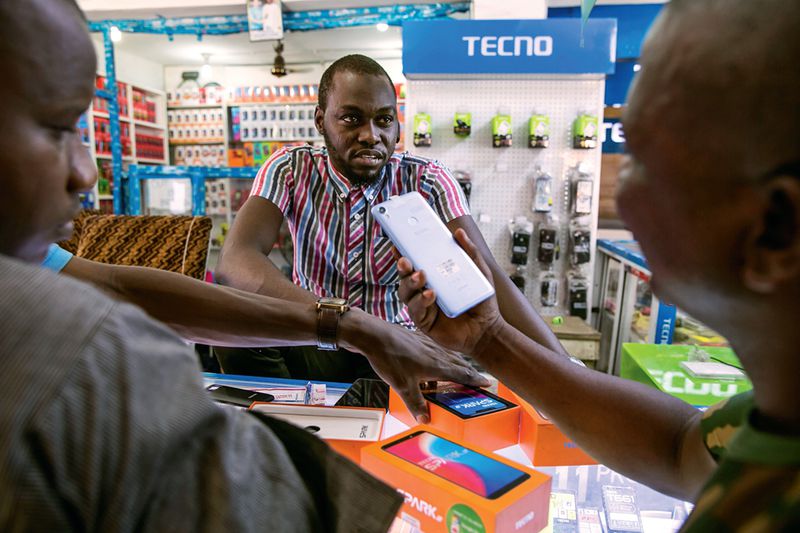 Transsion advertises heavily through its stores and billboards

Over 86 percent of Africans buy phones priced lower than 200 USD, with 47 percent opting for phones less than 100 USD, according to research firm IDC. Statistics from McKinsey show that over 10,000 Chinese-owned firms are currently operating throughout Africa, tapping the continent’s hunger for technology, trade, manufacturing, and infrastructure development.

Chinese tech powerhouses Tencent, Baidu, and Alibaba have all made strategic moves to invest in nations like Ethiopia and Zimbabwe. In 2018, Alibaba launched a 10 million USD program to fund 100 African startups for over a decade in order to discover a potential “African version” of Alibaba. ZTE, Xiaomi, TCL, and Huawei have all been trying to compete against Transsion in the mobile market.

So far, though, Transsion has been enjoying the lead it built since launching its first mobile phone in Nigeria in 2008. But its rise wasn’t a meteoric one. The company overtook rivals Nokia and Samsung as the biggest maker of mobile phones in Africa only in 2017. Finland’s Nokia has been selling phones in Africa since the mid-1990s, and once ruled the market in the 2000s.

When Zhu Zhaojiang decided to quit his job with Chinese phone maker Ningbo Bird to found Transsion in Hong Kong in 2006, the company focused solely on the South Asian market for the first two years. However, Zhu’s frequent visits to Africa as Ningbo Bird’s head of sales convinced him that the continent could be his most lucrative market.

Intense competition in China also played a role in pivoting Transsion overseas. In 2006, China’s mobile phone penetration rate was already hovering at 60 to 70 percent, while most countries outside of South Africa and northern Africa had only a handset penetration rate of 10 to 20 percent. The market was dominated by companies such as Nokia, Samsung, and Motorola, who sold to African users the same phones available in other global markets.

Yet Africa had its own challenges and usage preferences. Power blackouts were the norm in countries such as Nigeria, South Africa, and Ethiopia, where governments frequently shut down electricity for hours at a time to conserve energy. Network coverage is also inconsistent, and charges for cross-calling between service providers are high, leading many African users to keep several SIM cards in their wallet and switch between providers to make calls.

Transsion adapted to these local conditions by offering feature phones that could last 20 to 30 days on standby with a single charge, and in 2008 it become the first company to introduce phones with dual SIM card slots, two years before competitors like Nokia—today, some Transsion phones even include a four-SIM slot. 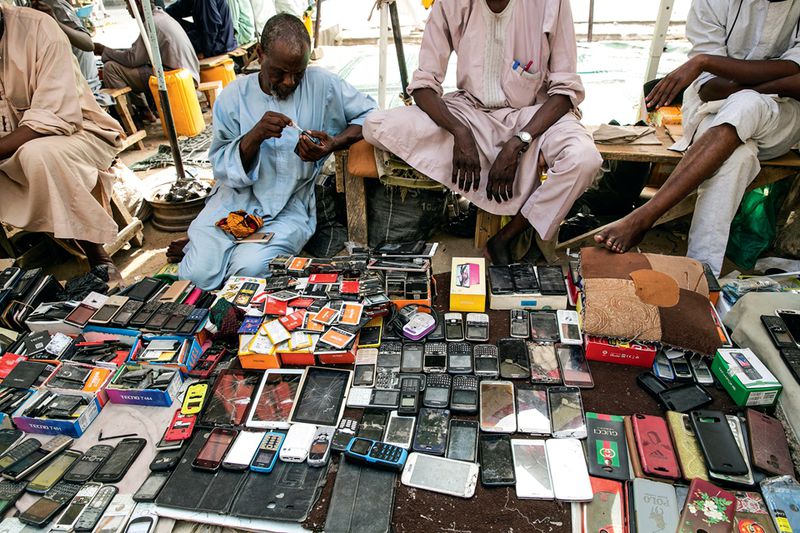 Mobile handsets are often sold at street markets, such as this one in Nigeria

Yet the feature that truly endeared Transsion to its customers is its camera, which calibrates exposures for darker skin tones. Face-recognition functions on traditional phone cameras, including those by Chinese phone-makers for the domestic market, are unable to reflect darker complexions in low-light settings, causing dark-skinned faces to lose definition in photos.

Transsion analyzed thousands of photos of dark-skinned Africans for optimal exposure and color temperature settings, and redesigned its camera to recognize faces based on eyes and teeth. “Our cameras adjust more light for darker skin, so the photograph is more beautiful. That’s one of the reasons we’ve become successful,” Arif Chowdhury, vice president of Transsion, told CNN.

The company now boasts a software ecosystem for the African market along with its handsets. Its app Boomplay is Africa’s top music-streaming program, with 70 million active users per month. It has joined hands with China’s gaming giant NetEase to roll out Vskit, an app for sharing short videos akin to the Chinese-developed TikTok, but only available in Africa, where it claims to have amassed more than 10 million users.

In 2019, Transsion invested in PalmPay, a mobile payment system preinstalled on its phones that offers bill payments, rewards programs, and discounted airtime in a continent where many do not have access to credit cards or mainstream financial services from banks.

Chinese rivals Huawei and Xiaomi are doubling down on their offensive on Transsion in Africa. The top two best-selling phone brands in China have launched lower-priced smart phones and set up new regional offices to vie for a share in the growing market. In 2019, Huawei took Transsion to court over claims that Transsion infringed on the design of Huawei’s graphics.

Transsion’s lower prices also come with a trade-off in revenue: Though it leads the world in volume of phones shipped, Transsion ranks just 11th in terms of profitability. According to a 2019 company prospectus, Transsion spends just 3 percent of its revenue on research and development, compared to 15 percent for Huawei, and has registered 630 technical patents to Huawei’s 10,000.

Still, its lead on the continent may give it an edge as more African users adopt high-end smart phones: Smart phone adoption on the continent is expected to soar to 66 percent in 2025, from 29 percent in 2018. As the banner in Transsion’s Shanghai office says, “Think globally, act locally”—Transsion has reaped fruits based on its localization strategies, but it remains to be seen if the “cell phone king in Africa” can keep its throne as competition on the continent heats up.

Scramble for Africa is a story from our issue, “Disaster Warning.” To read the entire issue, become a subscriber and receive the full magazine. Alternatively, you can purchase the digital version from the App Store.

Jason Tan is a contributing writer at The World of Chinese.