Why did a 3,000-year-old dynasty practice ritual killing?

As archeologists dug beneath the soil on the northern edge of Anyang, Henan province, in the 1970s, they began to unearth dark secrets from ancient history.

One after the other, 3,000-year-old skeletons were found beneath the ground—some kneeling, some with wounds consistent with torture. Others were decapitated, their skulls discarded in pits nearby.

These findings and the accompanying “oracle bone” inscriptions, the first known examples of ancient Chinese writing, showed that the remains came from thousands of ritual human sacrifices that took place during the Shang dynasty (1600 — 1046 BCE), pouring further mystery on the already murky history of the oldest Chinese dynasty for which conclusive archeological evidence has been found.

Shang society, it turned out, was extremely violent, but also deeply spiritual. Controlling an area around the Yellow River Valley, which included parts of present-day Henan, Shanxi, and Hebei provinces, the Shang kings acted as both military leaders and high priests, personally overseeing rituals involving human sacrifice and divination.

The discovery in 1928 of the late Shang’s capital, Yinxu (殷墟), at Anyang revealed a treasure trove of bronzeware, weapons, and the outlines of building foundations. Archeologists also found thousands of turtle shells and animal bones that were used for divination. Inscriptions were carved into the bone or shell, which were then heated until cracks appeared on its surface. The diviner would interpret these patterns to make predictions about the future, or answer the inscribed question. 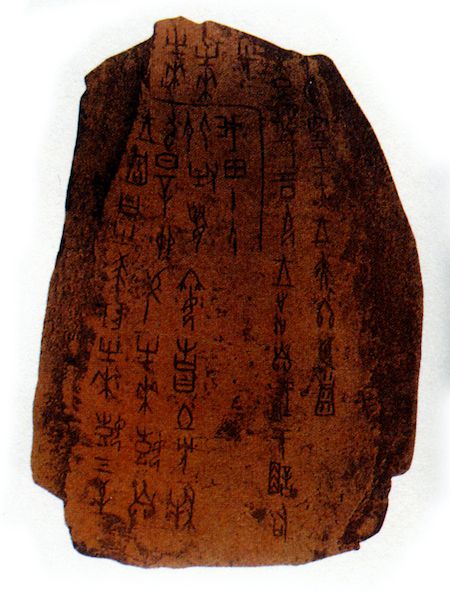 These inscriptions, which researchers are continuing to decipher, make thousands of references to human sacrifices. At Yinxu, archeologists discovered hundreds of burial pits, and more at other Shang sites, each containing up to a dozen human skeletons and countless more remains of animals, including pigs, dogs, and even elephants. Researchers have estimated that over the course of about 200 years, more than 13,000 people were sacrificed at the Yinxu site, usually males aged 15 to 35. Each sacrificial ritual likely claimed around 50 human victims on average; one sacrifice involved the death of at least 339 people.

One type of sacrifice, known as renxun (人殉), was performed for the burial of kings or nobles. The victims were likely servants or family members of the deceased who would accompany them in the afterlife, as their remains were found in tombs alongside other treasured possessions like bronzeware, weapons, and cowry shells (thought to have been used as currency). These sacrifices may have been voluntary, or at least accepted as part of tradition for those serving the elite. Chariots and horses were also buried with nobles when they died

But the majority of sacrifices were not of this category. Instead, the victims were killed as part of ritual ceremonies. While the victims sacrificed in renxun burials usually included women, most of those killed in ritual sacrifice, or renjisi (人祭祀), were young males.

Those sacrificed are referred to as “羌 (qiāng in today’s pronunciation)” in oracle bone inscriptions, a term that seems to have been used to describe tribes of pastoralists to the northwest of Shang territory. These peoples, considered barbarians, were likely prisoners of war, and were offered to the Shang gods. Some inscriptions suggest that Shang forces undertook military operations for the sole purpose of capturing Qiang for use in rituals. 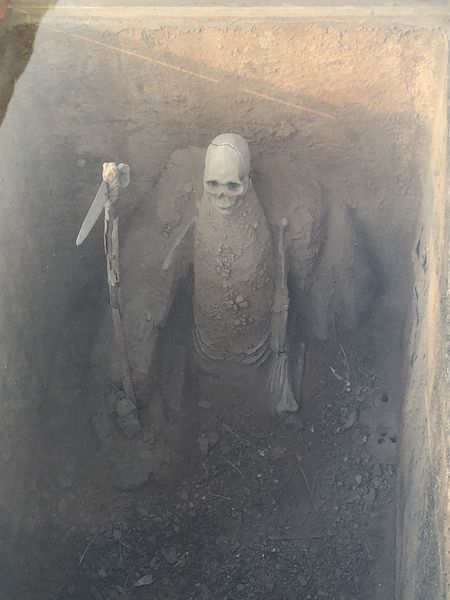 The method of sacrifice could be brutal. The character “伐 (fá)”, found on oracle bone inscriptions, appears to show an axe decapitating a person, and is the most common sacrificial method mentioned in writing. Some victims were first decapitated, and their head was boiled in a bronze pot. Other skeletons were found with their hands behind their backs, and their (still attached) skulls bashed in.

Oracle bone inscriptions indicate that these ritual sacrifices were an integral part of Shang tradition. Humans were offered to the Shang gods to ask for bountiful harvests or good weather, or to communicate with their ancestors. The rituals may also have been an effective way to maintain political control—the Shang king took part in the ceremony, reinforcing a social hierarchy where he alone could communicate with the gods, while the sacrifice itself instilled fear into his subjects.

Scholars believe that Yinxu was the last capital of the Shang, where several generations of kings resided for perhaps 200 years before King Wu of Zhou, with the help of legendary strategist Jiang Ziya, finally toppled the Shang rule and established the Zhou dynasty (1046 — 256 BCE). The Zhou appear to have been less concerned with sacrificing humans to placate the gods, and the practice seems to have died out under their rule. The tradition of funerary sacrifice, however, lived on—but with less beheading, at least.