“Hero is Back,” declares the subtitle for Monkey King, a 3D animated film from 2015 that made 956 million RMB at the domestic box office, won several international awards, and became China’s highest grossing domestic animation in decades.

Its title was meaningful in more than one way, as its high production values, connection to Chinese mythology, and unexpected success brought back memories of a “golden age” in Chinese animation—which the domestic film industry has been trying to recapture ever since.

Chinese animation’s “golden age” typically refers to a period from the 1950s to the early 1990s when domestic companies, led by the renowned Shanghai Animation Film Studio, produced cartoons with distinct Chinese styles that won acclaim both in China and abroad.

Animation technology entered China in the early 20th century. China’s first animated work, an advertisement called “Shu Zhen Dong Chinese Typewriter,” was made by the Wan brothers in 1922. At the time, though, the medium was still considered an exotic one, and Chinese animation mostly imitated American works—such as The Princess of Iron Fan (1941), inspired by Disney’s Snow White and the Seven Dwarfs (1937).

It was not until China’s first color animated film, Why the Crow is Black, was mistaken for a “Soviet movie” by the judges at the Venice Film Festival in 1955 that Chinese leaders suddenly realized the lack of national characteristics in domestic animation.

In 1957, the Shanghai Animation Film Studio (SAFS) was split off from the renowned Changchun Film Studio and officially established. The Ministry of Culture sent experienced early animators, including the Wan brothers, as well as young artists of the Central Academy of Arts to join the team. Studio director Te Wei put forward the slogan, “Knocking on the door of comedic styles, exploring the road of national form,” and the concept of a “Chinese school (中国学派)” of animation was born.

SAFS became China’s Disney. Before the studio was even founded, its team produced what is now considered the first work of the “Chinese school” of animation, Proud General, in 1956. Directed by Te Wei and Li Keruo, this 24-minute short based its aesthetics on traditional Peking opera. The main character, the general, is drawn in hualian (花脸, painted face), a Peking opera makeup style usually reserved for reckless and aggressive characters. The facial features of his brown-nosing aides are inspired by choujue (丑角, clowns), and the background music uses opera gongs and drums.

This started a trend of Chinese animators seeking inspiration in traditional art. Ink painting was a particularly rich source of creativity. The film Baby Tadpoles Look for Their Mother (1960) by SAFS takes its prototype from “The Sound of Frog Ten Miles from the Spring” by renowned painter Qi Baishi (齐白石). Animators captured the images of shrimps, frogs, and goldfish that Qi was famous for drawing, and rendered them in fluid motion.

The simple childish film has won many honors, including an honorary award at the Fourth Cannes International Film Festival in 1964. As they became well-known at home and abroad, Chinese animated films began to be called “fine art films (美术片)” in China due to their creative aesthetics, which also borrowed from arts such as shadow puppets and paper-cutting as well as opera and ink painting.

In addition to relying on the forms of traditional art, animators took inspiration from Chinese literature for the content of their films. Making an animation based on Journey to the West, one of the great classic Chinese novels, had long been a dream of Wan Laiming, one of the Wan brothers. He once wrote: “In the old society, I suffered pains and was never able to achieve my dream.”

The Monkey King, released by SAFS in 1961, won six awards including Best Picture at the 22nd London International Film Festival. Known as Havoc in Heaven (《大闹天宫》) in Chinese, it was China’s first color animated film, and was based on the first seven chapters of Journey to the West.

In the film, a stone monkey in Huaguo Mountain absorbs the essence of the sun and the moon and turns into the Monkey King, Sun Wukong. He is given a job raising horses by the Jade Emperor, the ruler of all gods, but grows dissatisfied and leads a troop of little monkeys in a rebellion against 100,000 heavenly soldiers. Unlike the original legend, Sun Wukong is not defeated and imprisoned by the Buddha under the Five Elements Mountain, but wins the fight and returns to Huaguo Mountain with the title “Great Sage Equal of Heaven.”

This antagonism between good and evil was precisely calculated to appeal to children. “The more art films meet children’s tastes, the more adults and children will love them; if everything is ‘adult-like,’ then neither adults nor children will watch it,” director Wan stated. Yet there was plenty for adults to enjoy in The Monkey King: On subsequent viewings, it has been considered a political metaphor, with the Monkey King representing the common people who successfully overthrew a feudal emperor, returned to their homeland, and became heroes. 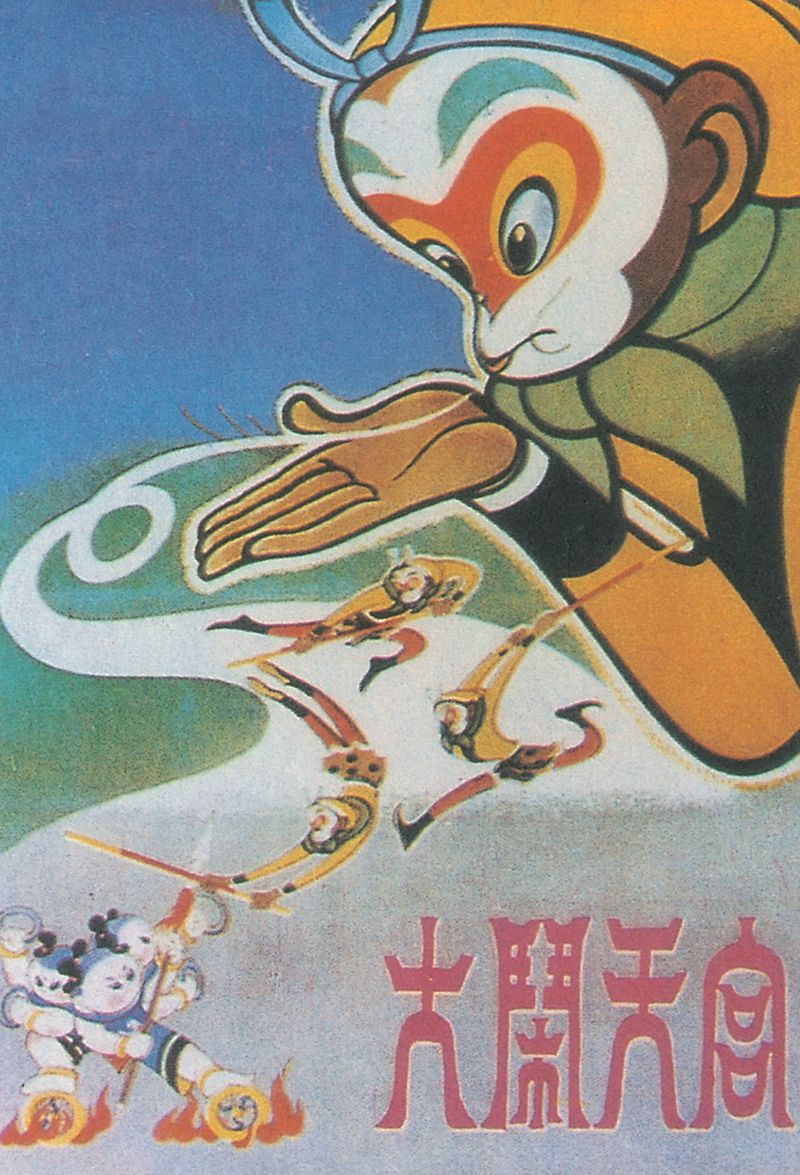 Other animated works based on classical literature sprang up after the success of The Monkey King. Prince Nezha’s Triumph Against Dragon King (1979), based on the classic Chinese novel The Legend of Deification, tells the story of the demon Nezha protecting the people of Chentangguan city against a dragon from the Eastern Sea. Lotus Lantern (1999), based on a myth of the same name, tells the story of a young man who goes through hardship and finally defeats his uncle Erlang and saves his mother. It won the Best Art Film Award at the 19th Chinese Film Golden Rooster Awards.

In addition to exploring traditional culture, Chinese animation also drew on and localized international classics. Tales of the Effendi, a puppet animation film produced by SAFS in 1980, featured its protagonist as a wise man based on 13th-century Turkish philosopher Nasreddin, whose legend is beloved in the Middle East, Central Asia, and China’s own Uyghur regions. The image of Effendi riding a donkey is still an iconic one from China’s animation golden age.

By the 1990s, however, the Chinese animation sector was beset by internal and external crises. Under the new market economy, all film studios were required to self-finance without government assistance. Around the same time, animated works from the US, Japan, and other countries entered the Chinese market. Since then, internationally renowned Chinese animations have almost never appeared again.

Hu Xin, a new media editor and content creator in her mid-20s at a Beijing-based internet company, says she only watched domestic animation as a child, including Lotus Lantern and The Monkey King. However, she became obsessed with Japanese anime like Slam Dunk and Sailor Moon after middle school. “Later I realized, maybe it was not because Japanese anime were better, but that domestic animation had changed,” she tells TWOC.

“People may be tired of the great principles and preaching in traditional animation, and just want to watch a fancy cartoon. Maybe cultural background matters, but the production values [of Japanese anime] are also great,” Hu muses. She also points out the impact of related products such as magazines, stickers, and clothes that Japanese anime uses to attract fans, and which Chinese works have been slow to develop.

In 2015’s Monkey King: Hero Is Back, the little monk Jiang Liu’er, who is based on Wukong’s master Tangseng, has a Monkey King puppet in his hands that exactly resembles the Monkey King in the 1961 film.

The plot was modified again for the new movie: Here, Sun Wukong is a fallen hero who has become cowardly due to defeats. It is not until he meets Jiang Liu’er that Wukong regains the courage to seek the title of “Great Sage Equal of Heaven.” The fate of the Monkey King seemed to be an allegory of Chinese animation—experiencing many ups and downs, and still chasing immortality.

Following the new Monkey King, 2019’s Ne Zha subverted all expectations to become the highest-grossing non-American animated film in the world, and the second highest-grossing non-English-language film of all time. Coincidentally, it was also based on Nezha’s fight against the Dragon King in The Legend of Deification, much like how the original Nezha film followed 1961’s Monkey King. Like their predecessors, China’s animators may be seeking to create a new golden age by looking to the past.

Lost in Animation is a story from our issue, “You and AI.” To read the entire issue, become a subscriber and receive the full magazine. Alternatively, you can purchase the digital version from the App Store.