As one of the world’s oldest farming civilizations, China has created numerous festivals to pray for or celebrate a good harvest. Though many of these rituals are disappearing due to urbanization, Zhongtuan village in Wuping county, Fujian province, has held on to several heart-stopping harvest traditions.

The 15th day of the 10th lunar month is leisure time for villagers after gathering in the harvest and sowing their fields for the coming year. On this day, the farmers of Wuping hold a “day of sacrifices (醮会日)” to thank their ancestors and pray for next year’s crops.

Zhongtuan’s 1,000 residents, most of whom belong to the Lan (蓝) clan, speak the Hakka dialect but claim descent from the ethnic She (畲) people, who settled in the area between the Song (960 – 1279) and Yuan (1206 – 1368) dynasties. The villagers have become locally renowned for dangerous acrobatic stunts at their harvest festival, summarized as “climbing a mountain of swords and walking on a sea of flames.”

Throughout the day, firecrackers, drums, and suona pipes sound a continuous fanfare, while bare-chested farmers turn into master acrobats as they perform: climbing barefoot up a ladder with 36 sharp knives fixed to the rungs; walking barefoot across a bed of burning charcoal; plunging their bare hands into a pot of boiling oil to scoop out fried rice cakes; stepping or sitting on a nail-studded plank; stubbing out incense sticks or firecrackers on their bare skin (known as “kissing the burning incense”); and more. Miraculously, villagers emerge from each of these stunts without a scratch. How they manage this is a closely guarded secret, but these painful performances pay tribute to the hardships endured by the villagers’ ancestors, who settled in a barren mountainous region and transformed it into today’s fertile farmland. 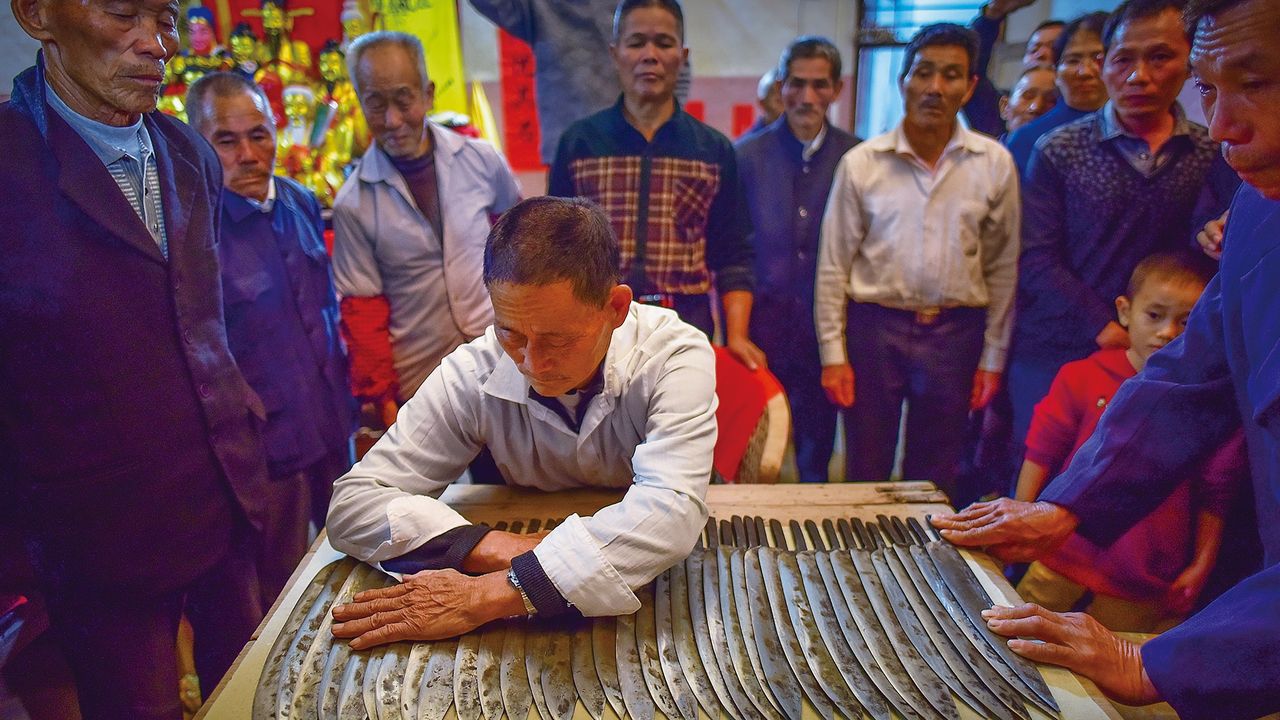 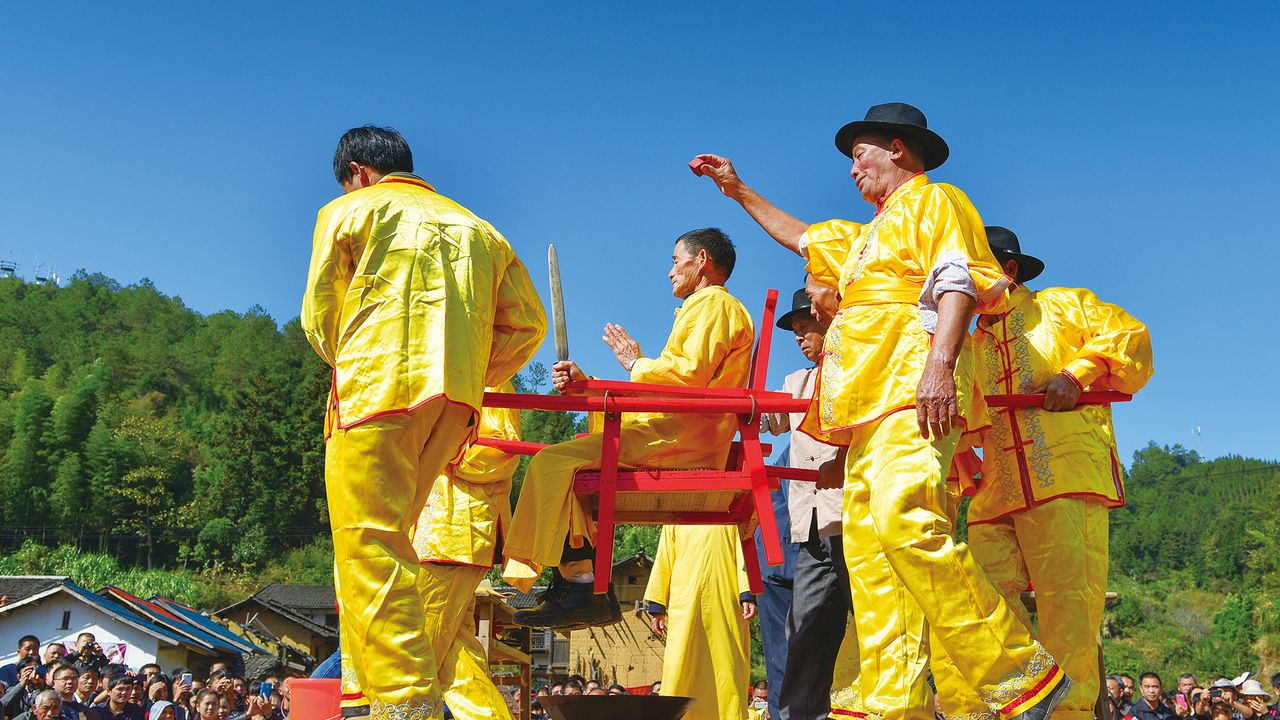 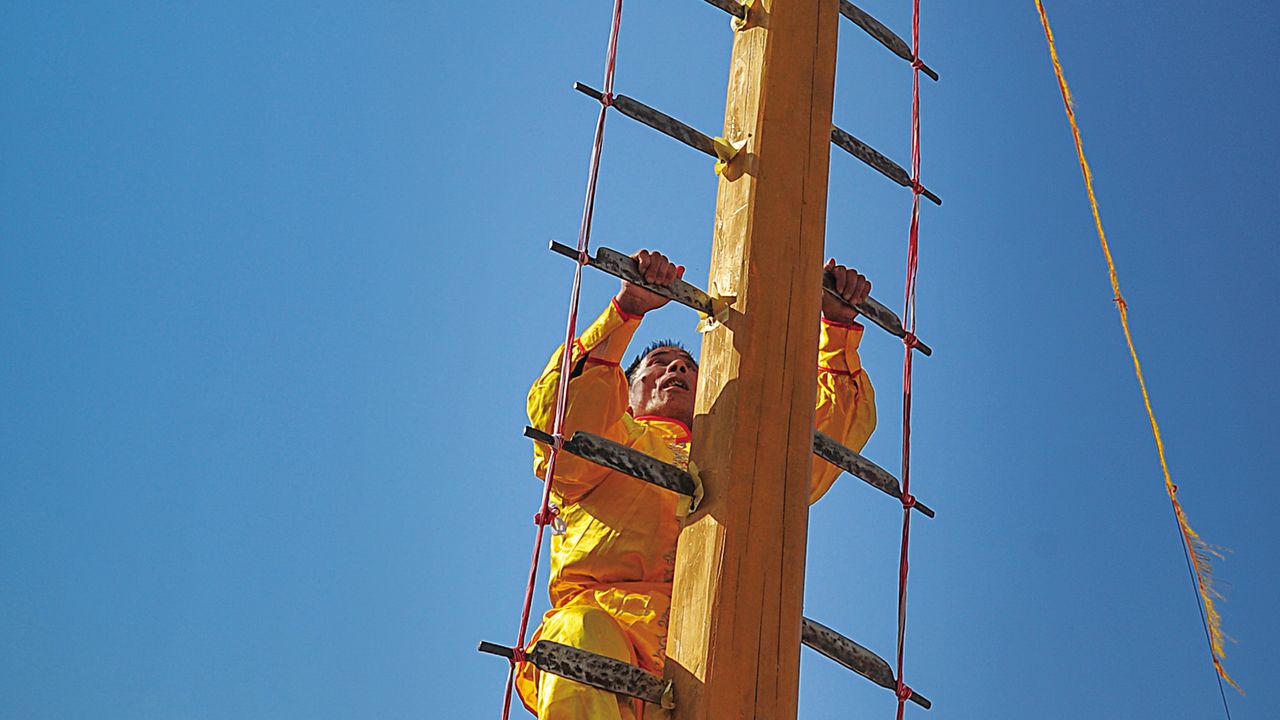 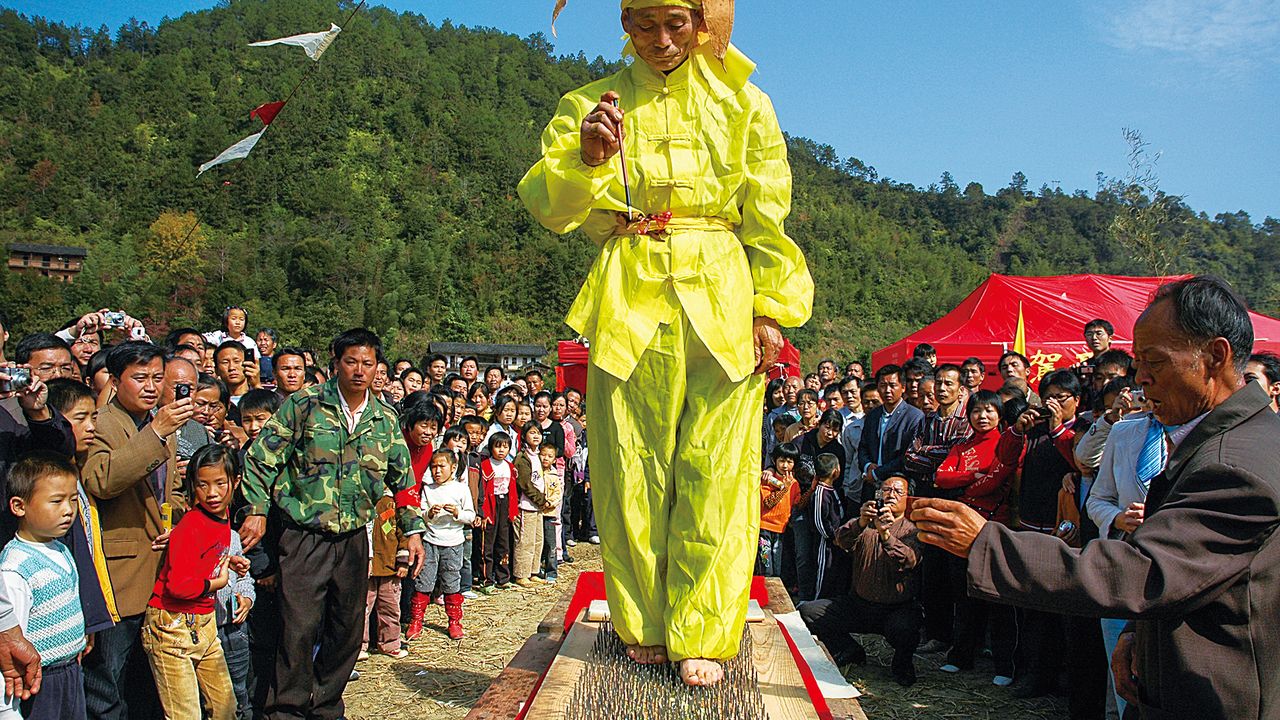 How the performers avoid injury is a village secret, handed down through generations and never shared with outsiders 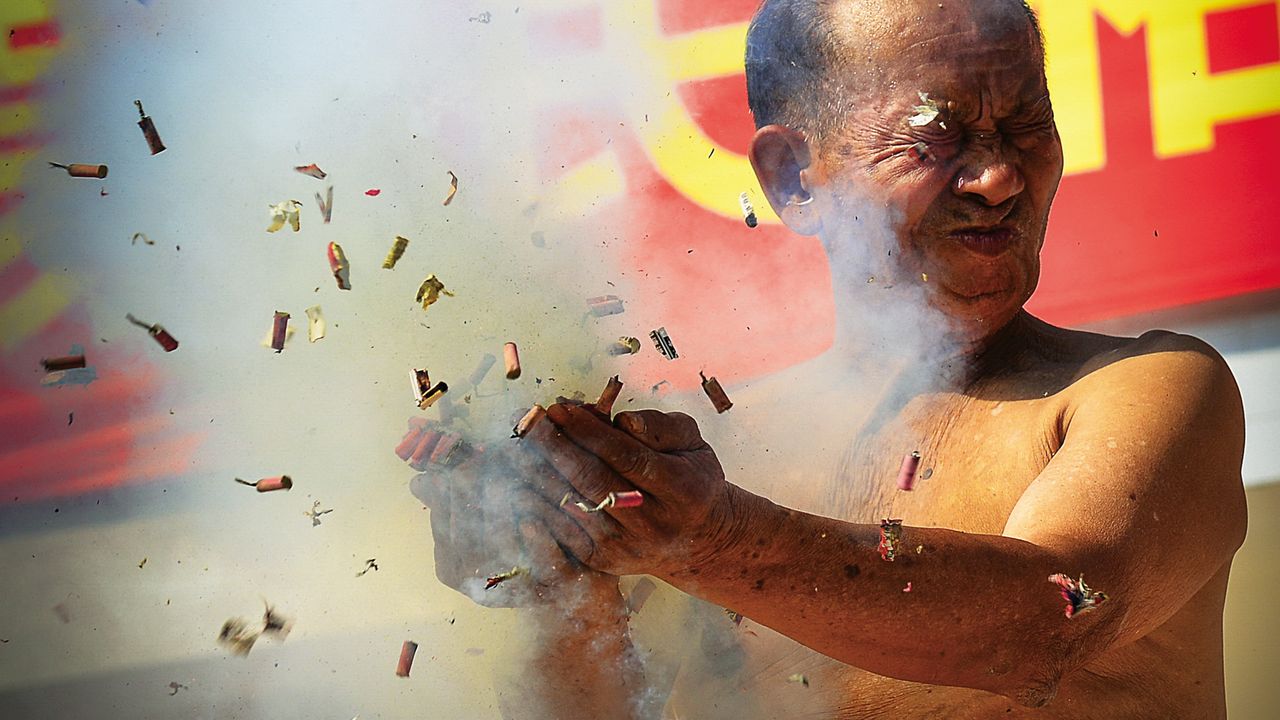 In “applauding the firecracker,” a bare-chested performer holds a firecracker in his hands as it explodes 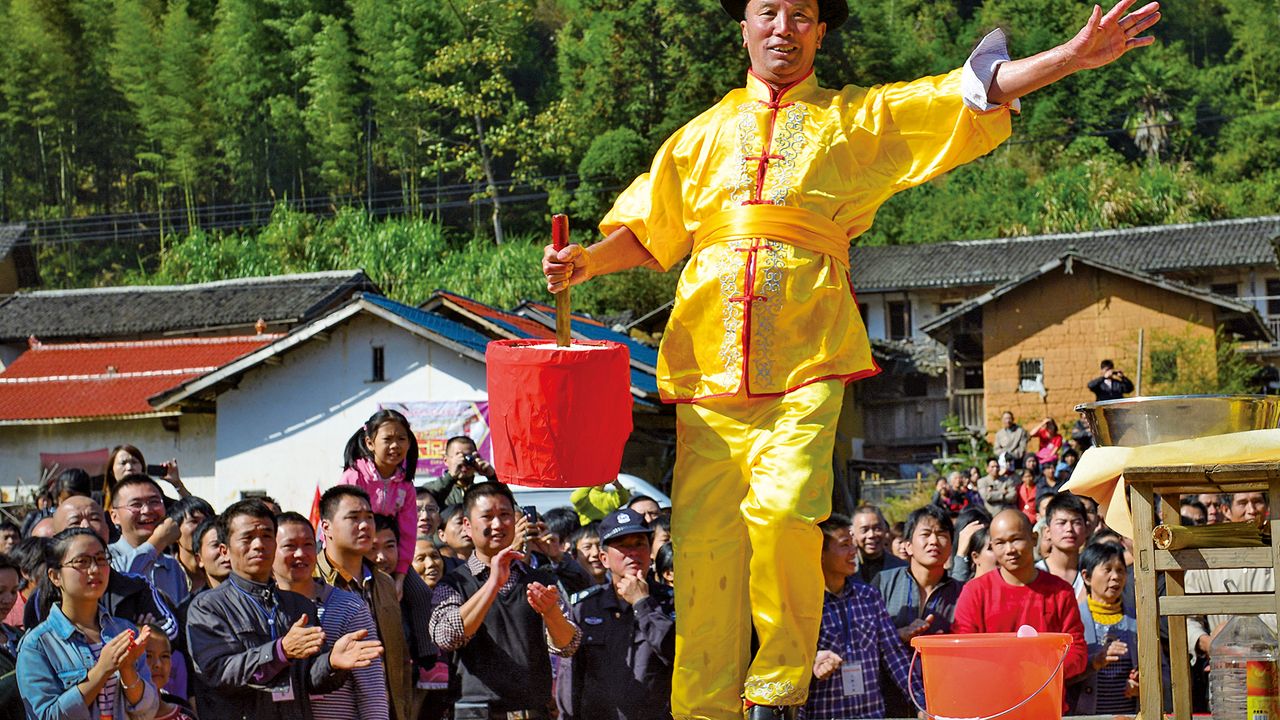 In “lifting the rice bucket,” the performer lifts up a container of rice, using a sharp sword inserted in the middle as a handle 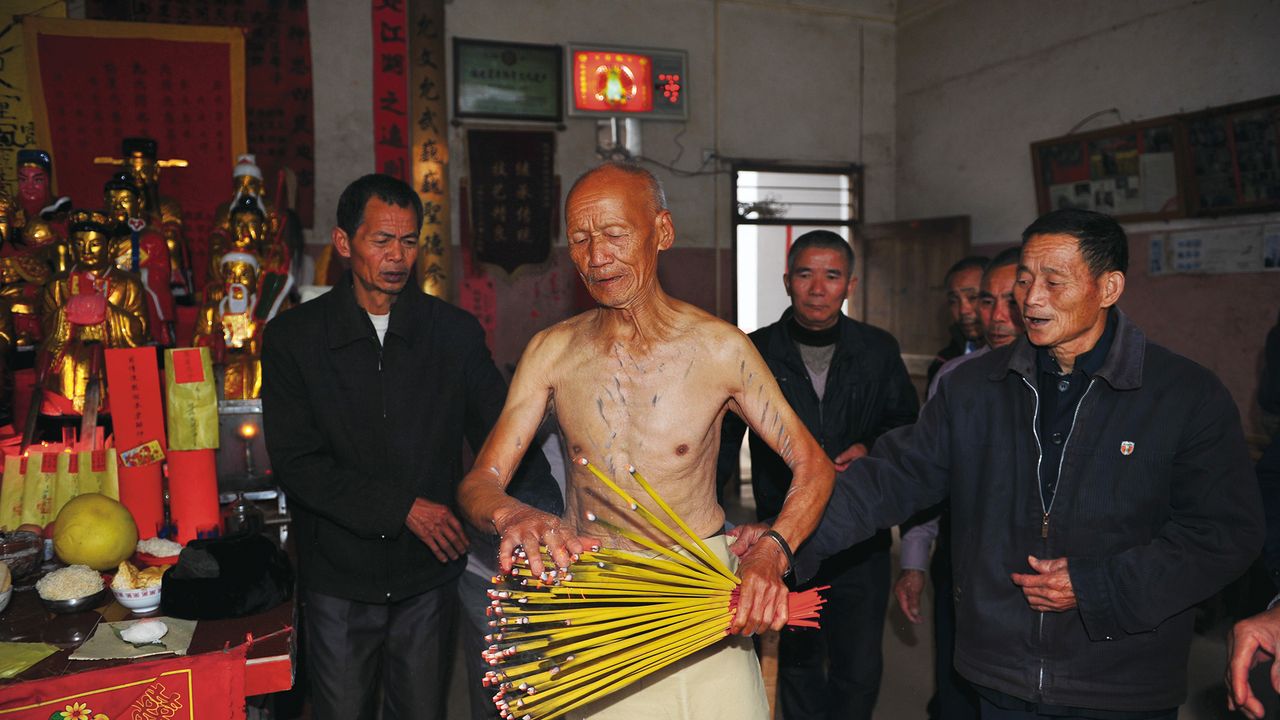 Performers of “kissing the burning incense,” mostly men in their 60s and 70s, snuff out the flames with their fingers one by one 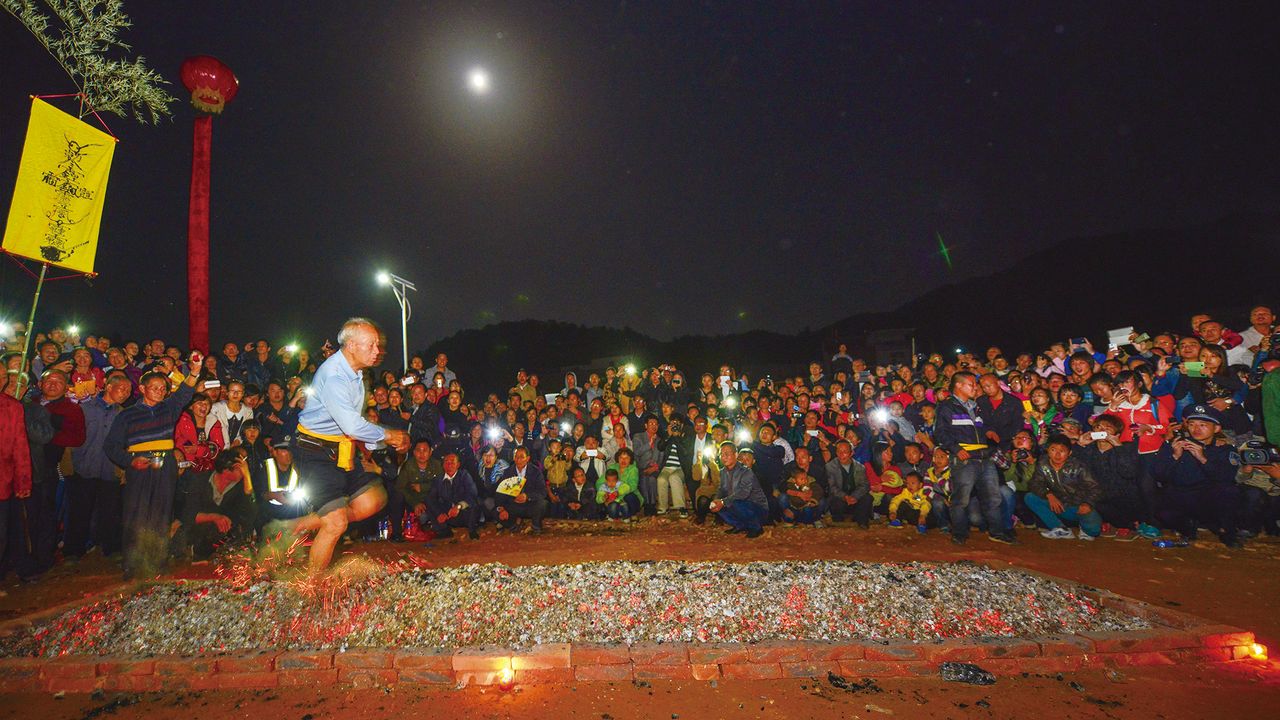 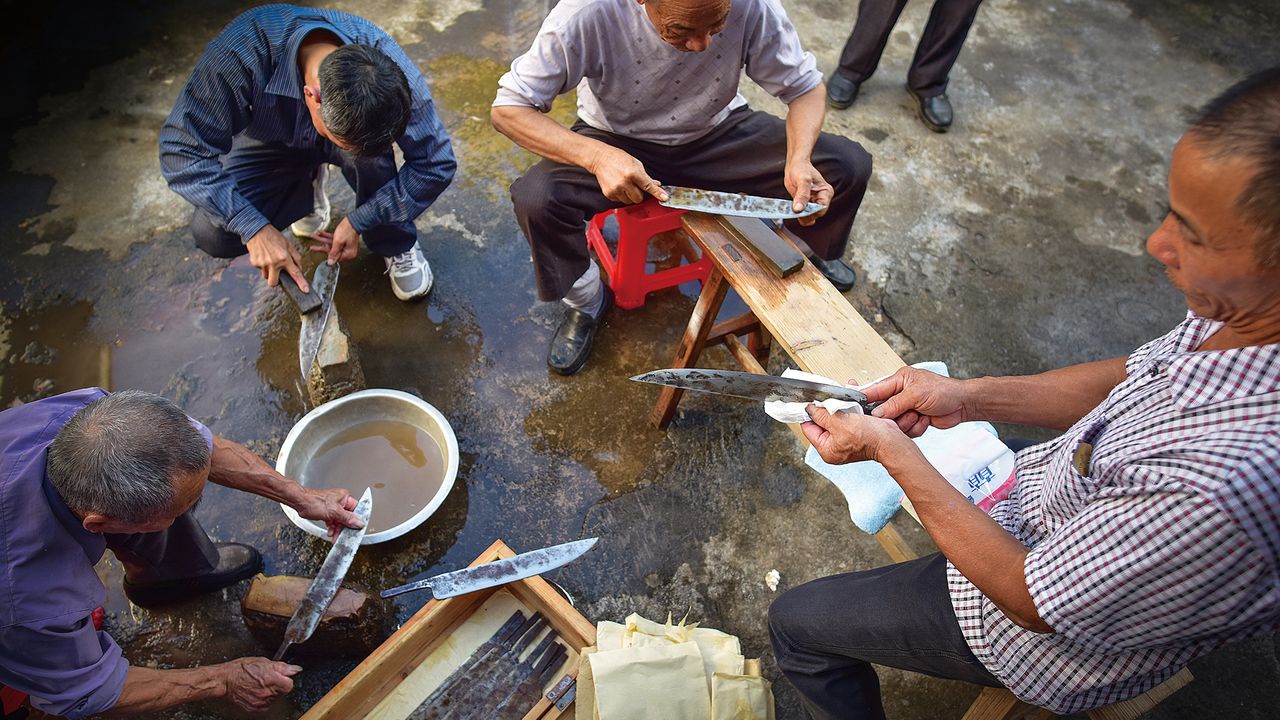 The whole village gets involved in setting up the acts

Walking on Fire to Celebrate Harvest Season is a story from our issue, “State of The Art.” To read the entire issue, become a subscriber and receive the full magazine. Alternatively, you can purchase the digital version from the App Store. Mid-Autumn Festival isn’t only about mooncakes and lanterns