The “sweet science” is normally attributed to boxing, but it’s an increasingly apt way to describe the machinations behind marriage in China.

Phoenix Weekly recently published a report on matchmaking (相亲) culture, focusing on public parks in Beijing. We’ve previously covered this phenomenon in Shanghai, and it works no differently in the capital: Hordes of mothers and fathers congregating in enclosed, grassy areas, and swapping documents showcasing their children’s attributes in an attempt to find them a partner.

But this practice does not simply rely on blind trust in the laws of probability—most parent have iron-clad standards that must be met, usually in the form of tangible financial assets or earning potential (as indicated by education and background).

Fortunately, Phoenix Weekly have done the hard work of researching and analyzing Beijingers’ expectations in the form of an infographic that lays out this matchmaking formula: 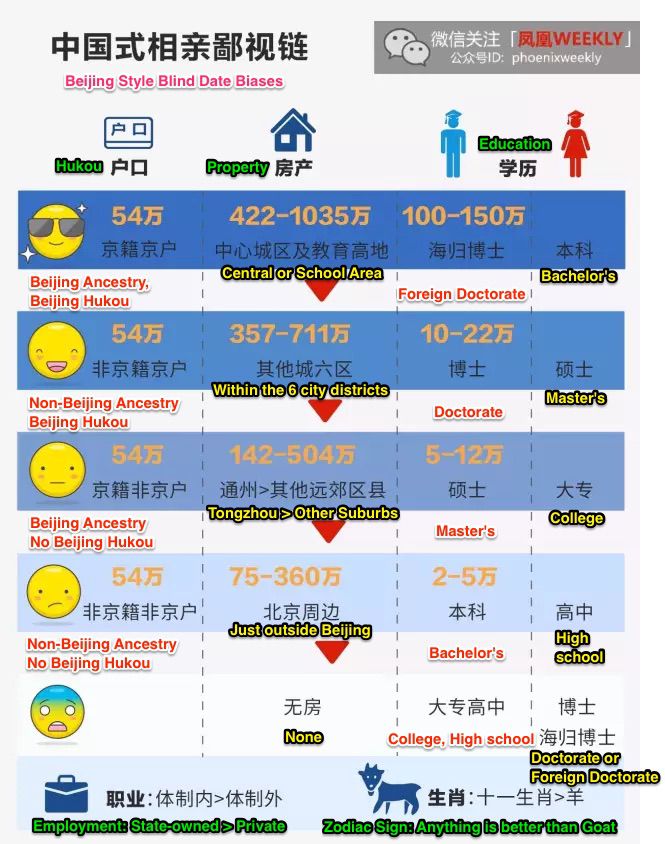 Monetary values approximated for hukou, property, and education are done according to “media estimates.”  They do not add any more value to the data (and don’t make sense) (凤凰WEEKLY).

The chart ranks which candidates are the most desired for marriage purposes under five categories: hukou status (including that of the parents), property ownership, education level, zodiac sign, and gender. A monetary value–supposedly based on property prices around Beijing and values that other “media” have assigned to the Beijing hukou–is attributed to the first three help, to users calculate their own scores.

According to Phoenix, the ideal partner is a proper Beijinger with Beijing hukou, who owns property in the city center or desirable school districts, has a PhD from a foreign university (if male) or a bachelor’s degree but definitely not a PhD (if female), and was not born in the Year of the Goat. The closer, higher, and better educated you are in these ranking, the more desirable.

Unless you’re a woman.

The study suggests that, for most parents at least, the ideal daughter-in-law is an undergraduate—those with a master’s degree are ranked second. A woman with a PhD is no more desirable to these parents than a male with only a high-school education.

Although Phoenix does not address this double standard, there are many theories—which we will not bother to mention because we all know anyway. 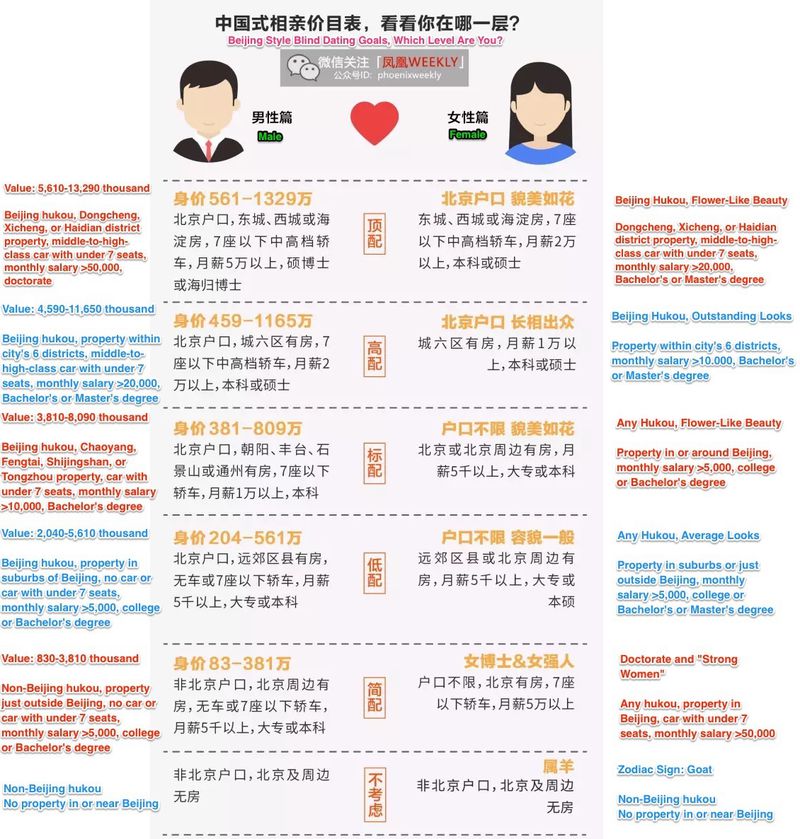 Click to view if words are too small to read. Note: value based on unspecified “media” estimates, which calculates the worth of a Beijing hukou at 540,000 RMB, and average property prices from May 27 for new and second-hand homes around Beijing between 60 and 90 square meters. (凤凰WEEKLY)

The second infographic (above) delves deeper into what other conditions prospective partners must satisfy. Based on data provided by media estimates, Beijingers believe that the best possible son-in-law has a Beijing hukou with property in Dongcheng, Xicheng, or Haidian district; a middle-to-high-class car with less than seven seats; a doctoral degree; and earns over 50,000 RMB a month.

For daughters-in-laws, different conditions apply—for example, a heavy emphasis on appearance, or “flower-like beauty,” as well as a Beijing hukou; property in Dongcheng, Xicheng, or Haidian district, a middle-to-high class car with less than seven seats; bachelor’s or master’s degree; and monthly salary of at least 20,000 RMB.

At the bottom of the chart are the conditions that cause parents in Beijing to turn away in disgust—no hukou, no property, and, for women, those born in the Year of the Goat. An aversion to Goat Babies not unusual: Phoenix spoke to parents who believe they are destined to lead hard lives, suffering either premature spousal death or infertility, offering the proverb 十羊九不全 (literally, “nine out of ten goats are ‘incomplete,'” i.e. will have misfortune) as evidence.

More troubling is the almost-obsessive need for eligible women to be financial and educationally inferior. A well-educated woman with a PhD earning over 50,000 RMB per month ranks alongside a man with no degree earning 5,000 a month. While this may reflect the outdated, traditionalist views of a messed-up generation, studies like this can impact the decisions of young single women.

Moreover, the data is presented in a misleading way. Buried within the article are passages that explain the interviewees are all parents from Beijing, though graphics all say “China.” Other cities and provinces have their own forms of pressure, as well as specific requirements for a prospective spouse. However, these figures almost certainly do not reflect what young, single people themselves want—or why parents have a bias against seven-seater cars?

After all, they’re spacious, adaptable, comfortable, and perfect for families—the exact thing that parents seem to want their new children-in-laws to be.