It grew up on the street, before heading to the big city and making a name for itself; now it’s here, there and everywhere—Beijing, London, San Francisco, New York. Jianbing (煎饼) is the humble immigrant with multiple personalities, the lowly snack that, somewhere along the way, became gourmet grub at places like Manhattan’s Mr. Bing, or Mei Mei’s Cart in London.

In March, The New York Times reported on local attempts to make the jianbing as “familiar and essential a part of the city’s food scene as tacos and falafel.” Carts offering varieties of jianbing from between 3.5 and 15 USD can be found in Flushing, Queens (long flush with Chinese immigrants), Kips Bay, Brooklyn, and Midtown East. Hipster varieties of jianbing have been spotted as far afield as Seattle and Portland.

Hailing from north China, jianbing is a crepe made with batter and eggs, typically topped with cilantro, scallions, and a sweet sauce made of bean paste, often with the addition of a deep-fried crunchy wafer (baocui, 薄脆). It’s usually sold on the streets as breakfast and eaten on the go.

I’m very proud jianbing is making its way as an envoy of Chinese food culture into the world of hamburgers, pizza, and pastrami on rye; I am grateful to the local entrepreneurs who’ve taken jianbing abroad, as well the foreign chefs who’ve tried to localize by adding Western-style ingredients to the original pancake. But I have to say: I am really surprised that somebody is willing to pay 15 US dollars for it.

After all, back home, a jianbing costs only 5 or 6 RMB (less than a dollar). And as good as those overseas variations might be, I doubt they’d ever be considered authentic.

Finding a jianbing cart in Beijing is as easy as tracking down a hot dog in New York. Just outside Chaoyangmen subway station, about 10 minutes’ walk from TWOC towers, there’s a stall I pass every day. At lunchtime in the middle of the week, four customers are lined up outside the window. A basic “bing” here—baocui and an egg—costs 6 RMB with optional extras: 10 RMB, for example, gets you some fried chicken wrapped inside.

It’s not bad, a bit bland, but the sauce is a disappointment. I remember the jianbing cart when I was living in Shanghai three years ago. It offered mayonnaise, ketchup, Thousand Island dressing, chili sauce, and homemade hoisin; you could have whatever you wanted, or even mix them up. But when I asked the vendor outside Chaoyangmen whether there were any more options, her response was curt—no one eats jianbing that way.

When I spoke to my friend Song Feifei from Tianjin, known as the city of jianbing, her first words were: “I never eat jianbing in Beijing. It would break my heart.”

There are many things you should never do in China; one  is try to talk back to a Tianjiner about jianbing. For Song, it was an essential part of her upbringing. She remembers bringing eggs from home for the vendor to add: “You’d put your egg on the stove, they’d remember when it was your turn.”

As for the ingredients, Song is adamant about what constitutes a proper jianbing. “First of all, we call it jianbing guozi (煎饼果子),” she began. “The batter has to be made of mung beans; the filling should only be fried dough stick or baocui; one or two eggs should be spread evenly on the pancake; chopped scallions, Tianjin sweet sauce or garlic sauce, and preserved bean curd can be added. No more is allowed.” Song glanced at the jianbing still in my hand. “Fried chicken, bacon, ham, rousong (肉松, ‘meat floss’), and lettuce are all heresy.” 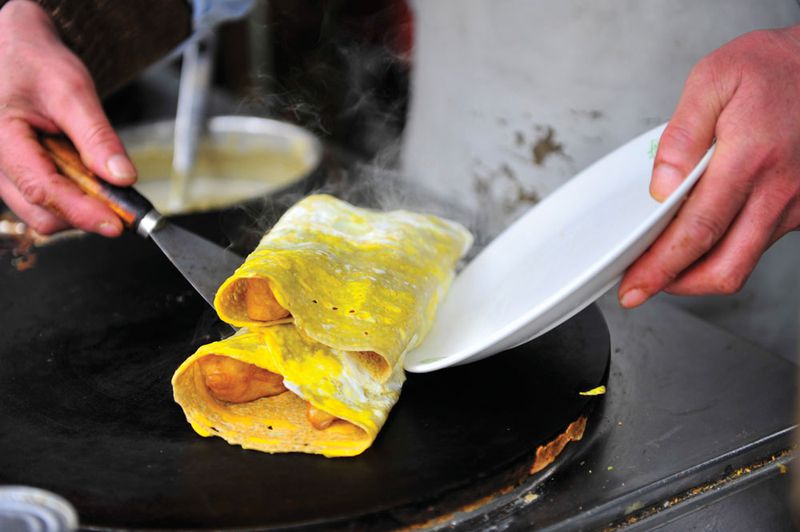 Song’s attitude may have been strict, but it was no outlier. Crosstalk comic Guo Degang, a Tianjin native, described eating the snack in Beijing as “terrifying…take one bite, and your throat gets blocked and you have to poke it all down with a chopstick.” On the internet, the proper preparation of jianbing is a touchy subject. “Ketchup on jianbing guozi is completely challenging our Tianjin tradition,” claimed one blogger. “These bizarre variations are destroying Tianjin’s cultural heritage,” warned another. “If you love your city, you love the cuisine. It is what we should defend,” Song explained.

Against interlopers like McDonald’s, perhaps? One jianbing-lover compared superfluous ingredients to Westernization. “Wrap ham and lettuce into a jianbing guozi?” he asked. “Why don’t you eat a slice of pizza with some vinegar? Are you selling a street-food version of McDonald’s hamburgers?”

Indeed, the fast-food giant has its own specific variant on Song’s beloved snack. Called the “Mc-Jianbing (麦煎饼),” it contains everything the avowed Tianjiner hates—bacon, ham, even hash browns, all wrapped in a pancake batter that has never seen a mung bean in its life. Surprisingly, Song approves of its slogan “Jianbing? No! It’s Mc-Jianbing!”

“I’m not looking down on these so-called ‘jianbing,’” Song said. “Maybe they taste good for others. The only problem is that they are not real jianbing guozi,” says Song.

I realized it was time to move the discussion away from Song’s jianbing guozi, but still had one important matter to confirm: Is it true that Shandong really “invented” the jianbing? 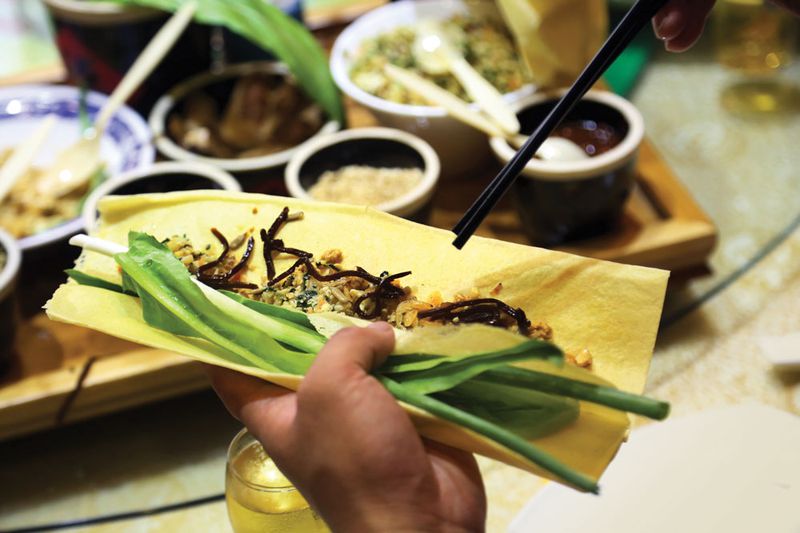 A chef wraps vegetables, pickles, and peanuts in a Shandong jianbing (VCG)

Legend has it that during the Qing dynasty (1616 – 1911), a Shandong martial artist named Laodao killed a pair of thugs he’d seen bullying an elderly man. Laodao fled into exile with only a knife and a bag of flour, and is supposed to have lived on pancakes cooked on his blade. Along the line, Laodao picked up a couple of dough sticks and some leeks to spice up his watery pancakes, and eventually ended up in Tianjin. Somehow, the story goes, this vagabond confection, named “jianbing wraps” (煎饼裹着 jiānbing guǒzhe) acquired citywide repute and became today’s similar-sounding jianbing guozi.

“I don’t know whether the story is true or just fabricated,” Song said after hearing it. “But Shandong jianbing has all my respect.”

The coastal province has long been linked to the savory pancake. There are a multitude of origin stories: Some say that Three Kingdoms military leader Zhuge Liang (诸葛亮) invented the jianbing to feed his troops, while a recipe of sorts can be found in the records of the Ming dynasty (1368 – 1644), making the original method of preparation at least 400 years old.

And by original, I do mean back to basics: Zhu Na, a Shandong native, describes her province’s take as “completely different from jianbing guozi. Ours is a dry, thin, paper-like thing,” she says. “It’s not a snack. It’s a staple, like rice or buns. The batter can be made from grain, corn, sorghum or even sweet potato. And it isn’t necessarily eaten hot.” A Mc-Jianbing wtih bacon and egg inside (Cai Tao)

It is, in essence, a plain pancake—about as far away as possible from the luxury, barbecued pork, roast duck, and wine-steeped chicken-stuffed wraps found at Mr. Bing, or even the eggs, herbs, chilis, and ham that goes into Mojoilla Fresh in the Queens version. Not that Shandong people are ascetics; they simply regard the ancient jianbing as a versatile feast. “We wrap everything with it,” Zhu told me. “Stir-fried dishes, pickled vegetables, tofu, raw leeks with sauce, even sugar…anything you like.”

I didn’t tell Zhu that the last time I’d tried Shandong jianbing, it was so tough I couldn’t chew it at all: It felt like tearing a book with my teeth. But according to Zhu, the texture is actually an advantage: “You can make a lot of jianbing at once, and it won’t go bad for months. If you want to soften it, just heat it a little before eating.”

Although Zhu considers Shandong jianbing both healthy and slimming (“there’s no oil…When I was pregnant, it’s the only food didn’t make me sick”), she accepts it’s not for all tastes. “Authentic Shandong jianbing is more a homemade food, and doesn’t have much potential to become a popular street snack. Today, many so-called ‘Shandong Jianbing’ you see are more like Tianjin’s.” Unlike Song, this doesn’t bother her. “There should be innovation,” Zhu said.

Inspired by the spirit of inclusivity, I sent her a picture of the Mc-Jianbing. “Do me a favor,” she replied a few seconds later. “Call it jianbing guozi, please.”

The Bing Dynasty is a story from our issue, “Wheel Life China.” To read the entire issue, become a subscriber and receive the full magazine. Alternatively, you can purchase the digital version from the App Store.