Even in the humid heart of southeast China’s rice country in Jiangxi province, something akin to winter begins every December. Those days, when the temperature drops to zero and there’s a bite to the air you can breathe, my grandmother starts curing salty pork for the season ahead.

“We’ll have the meat ready to eat for the New Year. All our neighbors must be doing the same,” she’ll say, producing a ball of string to hang the darkened meat strips to dry beside the laundry. “There’s no need to take a picture.”

All the temperate regions of China have stories about the meats they preserve. On my grandmother’s Spring Festival table, larou (腊肉) and lachang (腊肠)—pork belly and sausage—tell tales about deprivation and survival. Cured on our own balcony, they pack a salty punch to the palate even now, when they are no longer the meatiest dish the family can afford all year. The pattern repeats across China: Nanjing back bacon, made in the 12th lunar month; legs of ham gifted at Spring Festival in mountainous parts of the South; the rhythms of salting and feasting are embedded in the agricultural calendar and a determination to hold onto the season’s best offerings.

But the localism of most of these delicacies means you’ll be hard pressed to find them outside their home region, let alone outside China—instead, you’re more likely to find reports of the growing middle-class taste for Spain’s prestigious Ibérico ham, which recorded sales of 2 million USD in China in 2016, or Italy’s Parma, which made 1.5 million USD.

These figures are a troubling prospect for Ma Xiaozhong, president of the Jinhua Ham Trade Association. The eponymous charcuterie, from the Jinhua region of central Zhejiang, may not be the oldest meat-curing tradition in China—merely 1,400 years, a blip in the country’s gastronomic history—but it is definitely the most ambitious. Ma claims Jinhua, alongside Parma and Serrano, as being “the world’s big three types of ham.”

A former food-safety expert, Ma answered my call the first time from inside the salt chambers of the Jinhua Municipal Salt Corporation, where he was inspecting the crystals. The corporation is hoping to become the sole supplier of salt for all hams under the Jinhua trademark in the future. “Salt is the only additive to Jinhua ham, so its quality has an enormous impact on the ham’s quality,” Ma said. This is only the first step, however, to Ma’s real goal of having Jinhua ham become what he calls a “first-rate industry,” one that offers “culture” rather than merely a brand or product. 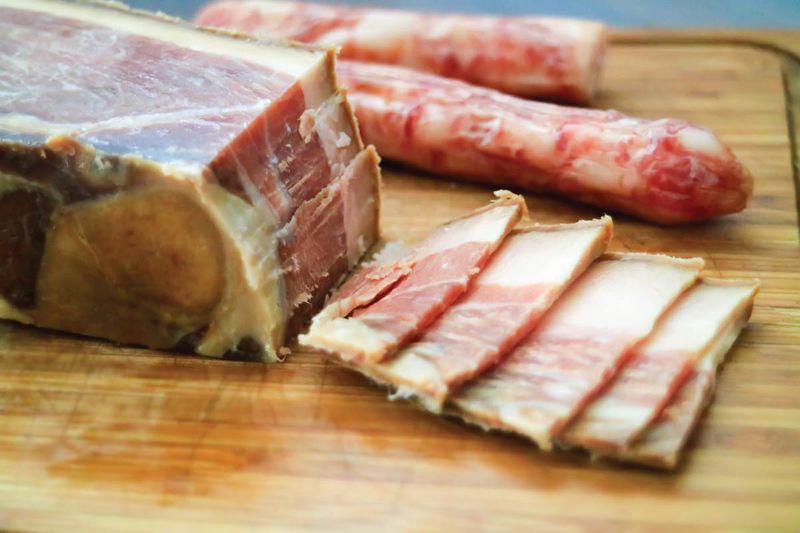 Jinhua ham has an extremely dense flavor, and is often used to make soup stock or flavor other dishes (Cai Tao)

In the words of Chinese-American author Zhang Mei, it’s about “doing a good job in Chinese ham-storytelling.” Born and partly raised in the Dali Bai Autonomous Prefecture in Yunnan province, Zhang is the author of Travels Through Dali With a Leg of Ham published in 2016, which tells a completely different story to Ma’s about the role of ham.

“In China today, in ham-making, in everything, there’s a huge rush to commercialization, to world dominance, to IPO,” Zhang told me. “It’s those traditional craftsmen who take time to do one thing, and the people who took time to cook for me, to share stories with me…[it’s] those moments when people connect that make Yunnan home for me.”

Dali’s ham is not well known, even in its own province.  Jinhua, though, once had all the promise of ham legend: Around the 11th century, Jinhua ham was made only from the hind legs of an exquisite, black-and-white patterned local breed, the liangtouwu (两头乌, literally “both ends dark”) or “panda pig,” and exclusively cured with sea salt. Production only began when temperatures dropped below 10 degrees Celsius; hams had to be trimmed to a distinctive bamboo-leaf shape, branded with an iron, and cured for a period of eight to 10 months. In the early 20th century, Jinhua’s artisanal hams captured top prizes at international expositions in Leipzig in 1905, San Francisco in 1915, and Honolulu in 1935.

Those days are sadly gone. The panda pig is now an endangered species, according to a 2010 study by researcher Wang Guihong of the UN Food and Agricultural Organization. Local farmers instead prefer to raise non-native breeds that could be bred quicker and brought in more profit. In another study in 2012, Wang criticized the Zhejiang Food Company for delegating production of Jinhua ham in the 1980s and 1990s to enterprises without regard to their location or ingredients, “[This] caused significant damage to the quality and reputation of Jinhua ham,” Wang wrote. “The local element of the product has been compromised.” In Zhang’s home region of Dali, ham is cured by piercing the meat with a sharpened chopstick to let the salt penetrate (Liz Phung)

Contrast this with Parma ham, a successful EU trademark that sells itself on quality—guaranteed by near-obsessive regulations that restrict production to 11 approved Italian regions with inspectors to pay house calls on the producers. There’s also the lesson of Jamón Ibérico, in which the mystique of the black Iberian pig, acorn-fed and freely roaming the Andalusian fields, helped its prestige—and price tag—survive the indignity of a ban by the US Department of Agriculture over concerns about swine fever. The USDA’s restrictions on Ibérico were eased in 2007, while Jinhua ham remains forbidden.

Ma is cagey about describing these challenges, delicately referring to “technical palisades” that restrict Jinhua’s ability to compete globally. “The cultural content is there…unbroken for 1,000 years. Even today, local bridegrooms gift their new mothers-in-law a leg of ham; mothers eat ham to recuperate from giving birth; people who undergo surgery eat it for a speedy recovery,” Ma wrote to me. In Jinhua there’s ham in the zongzi eaten over the Dragon Boat Festival, the mooncakes during Mid-Autumn Festival, the seasonal broths. Ma concluded his tale with a flourish: “I owe it to my ancestors—to make this my life’s work, to never let these traditions die!”

Back in Jiangxi, a woman I call Aunt Hu—for lack of a better name for my uncle’s wife’s cousin—told me at length about ham from her home in the rural county of Anfu in Ji’an prefecture. Anfu is one of China’s “three great hams” (along with Jinhua and Xuanwei ham from Yunnan), was also exhibited in San Francisco in 1915, and actually takes credit for the Chinese name for ham, huotui (火腿, “fire leg”), due to its historical function as ritual offering for the gods more than 2,000 years ago. “We eat it regularly. When you invite a guest to a restaurant, there’ll always be a plate of ham to pin down the whole spread,” said Aunt Hu. Yet my extended family, living in the city, knew far more about Jinhua than Anfu ham. 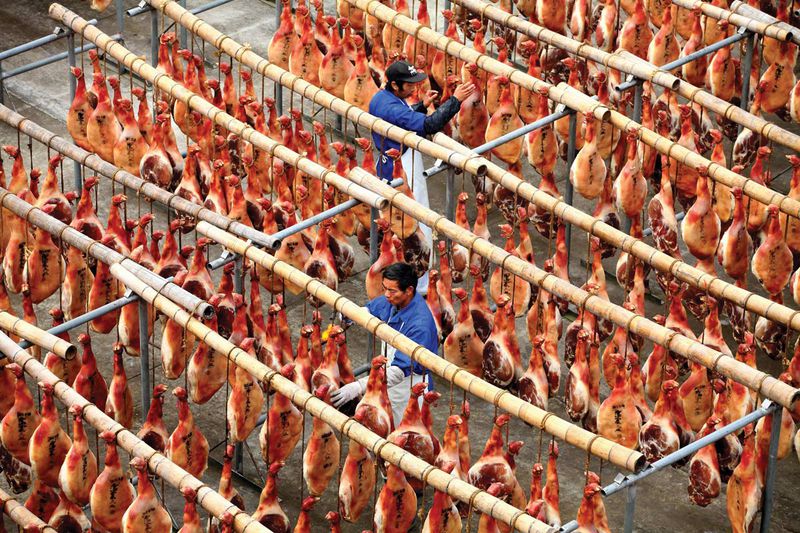 Traditionally, Jinhua ham is left to dry at least 10 months before it is consumed (VCG)

In Anfu, commercially produced ham is starting to take center-stage, as fewer in the countryside keep pigs, but there’s little marketing to speak of. “The most authentic Anfu ham is cured in the homes, in the villages,” Aunt Hu insisted.  “People will just hang it over the stove and let it cure from the residual smoke.”

Is it necessarily a tragedy for food stories to remain regional? In her book, Zhang recounts meetings with friends, family, and strangers, that would invariably include platefuls of ham—boiled with rice, served with local cheese, or eaten alone. “The most joyful by-product of food and eating is people coming together to share stories,” she writes.

After two or three years of curing, Yunnan ham is scorched over an open fire, washed in spring water, chopped, and ready to consume (Liz Phung)

Zhang suggests an alternative to pushing Chinese ham onto the world’s stage—it’s possible, perhaps preferable, for outsiders to find things to appreciate or improve about food in its native habitat. At one point she writes of the new, international residents of Dali, making Spanish-style paella with local ham: “It’s a very Dali gathering: itinerants from all walks of life, dining on Mediterranean dishes using Dali ingredients, with our Bai ham as the star attraction.”

When I asked Aunt Hu for a reliable way to get good quality Anfu ham from a northern city, her reply was much the same. “Just come see us next Spring Festival,” she said. “I’ll give some to you. You’re family.”

PORK ON YOUR PLATE

From snacks to sausages

Pig belly—known as wuhuarou (五花肉, “five-marble meat”) for its streaky patterns of fat—dry-cured with salt. Jiangxi-style larou uses 50 grams of salt per 12 kilograms of meat, and the salt must be warmed on a pan before spreading on the meat. The meat is then sealed in a container for one week to remove moisture before being air-dried. 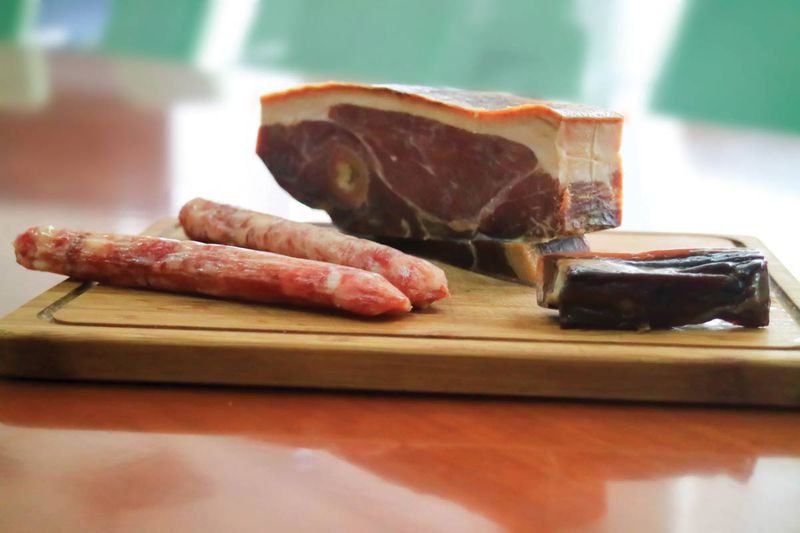 Jinhua ham is often packed in gift boxes and presented to friends and acquaintances on holidays, along with sausages and other meat products (Cai Tao)

This product has very little to do with ham, and a lot to do with starch and gelatin. Sold in almost every supermarket, individually wrapped, as a popular snack—however, major brands such as Jinluo and Shuanghui have all suffered food safety scandals in the last two years.

A New Year tradition in the Sichuan-Chongqing area (though Hunan also has its own variation) states that, once a pig is slaughtered in the final month of the year, the family must have meat in the house for a whole month after. The meat is soaked in brine, air-dried for half a month, then hung over the stove to catch the smoke.

Pork pickled in a mixture of sweet fermented-flour sauce (甜面酱), rice wine, salt, sugar, and peppercorn. Beijing, Tianjin, Guangdong, Shanghai, Jiangsu, and Sichuan all have their own branded variations, and use different parts—belly, hind leg, even cuts of the leg with cartilage.

Pork or beef that is dried then shredded. It is often then steamed with rice or added to congee or bread, or in jianbing or other snacks.

Hamstrung is a story from our issue, “Beyond Go.” To read the entire issue, become a subscriber and receive the full magazine. Alternatively, you can purchase the digital version from the App Store. Once neglected in Chinese cookery, Yunnan food now thrives by emphasizing what other provinces lack