It’s not a national holiday—but most young couples in China were celebrating. Why? Because it’s May 20

May 20 is not a national holiday—but most young couples in China are celebrating. Why? Because it’s 5/20 (520), in which the Chinese pronunciation of five sounds like 我 (wǒ), two sounds like 爱 (ài), zero sounds like 你 (nǐ): I love you (我爱你).

No one knows exactly how this day became so big: Some think it’s because of Fan Xiaoxuan’s song “Numeral Love” (《数字恋爱》), with its lyric “five two zero 是我爱你 (shì wǒ ài nǐ, 520 means I love you)”; other people think it’s just another internet holiday, like Double 11, promoted by merchants to make money.

No matter why, it’s still a native version of Valentine’s Day in which girls expect gifts and boys fret about what their girlfriends want. Every account on WeChat will have articles about how to pick gifts lover; a search for “gifts for girlfriend” on Taobao is like entering a whole new world. Most of the products on offer are typical of “straight guy aesthetic” (直男审美), and many of their recipients will not cry for joy (as advertised). 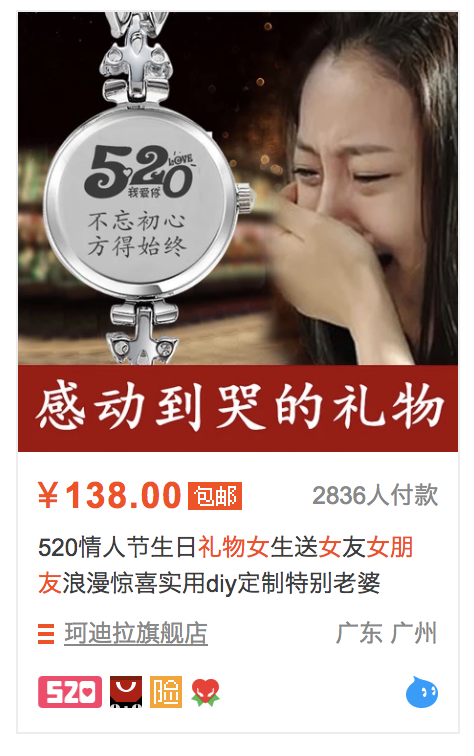 A gift that will make her cry…  with frustration?

As girls often don’t reveal what they really want (or their partner is just not paying attention), and boys usually like to buy themselves gifts (“Honey, I got you that Xbox One you definitely mentioned… once!”), perhaps the gift of gab might be a better use of your time.

Known as “earthy romance” (土味情话), these exchanges are considered “earthy” because they are very basic, might even sound silly or schmaltzy, but sometimes seem to work.

There are rumors saying that I fancy you, I just want to clarify that…those are not rumors

You are too shy to ask someone out, but hope to drop a hint

女：“你太自恋了！” (You are so narcissistic!)

You are already dating and just want to say something nice

男：“那你是怎么点燃我的心的？” (Then how did you light up my heart?)

男：“你猜我的心在哪边？” (Guess which side my heart is on?)

Though on second thought, you might just want to stick to the flowers…