“My body is here, but I don’t feel I am here, right now,” the nameless narrator in Xiaolu Guo’s A Lover’s Discourse explains to her partner.

A Chinese graduate student in post-Brexit vote London, she struggles to find a sense of belonging in a foreign land, and in a relationship that quickly deepens but remains uncertain: “I don’t feel my existence in this environment.”

Discourse, which takes its name from Roland Barthes’s book A Lover’s Discourse: Fragments, is a series of short vignettes addressed from the narrator to her (also unnamed) lover. But Guo does away with the romantic, and instead explores themes of attachment, foreignness, belonging, and authenticity, with the central relationship as the backdrop for these musings and for conversations on everything from the value of landscape architecture to the meaning of originality.

When our narrator arrives in London, she is unaware of the political environment she has entered (she has never encountered the phrase “Brexit” before, and is surprised she can’t find it in her dictionary). She has come to study, but also perhaps to start a new life. She meets a German-Australian landscape architect who picks elderflowers in the park, they quickly move into the cramped apartment he shares with several roommates, and their relationship grows.

Practical concerns are wrapped up in the philosophical, as the narrator constantly negotiates (with her partner and herself) where they should live, where they should travel, how they can survive, and what the future holds. They spend time living in the shared apartment and then on a canal boat in London; have a stint in Australia; and later move to the German countryside, but struggle to settle. Uncertainty always lingers, and this tension in the relationship makes the writing compelling.

Even when marriage and a child come along, our narrator is never without doubt: “How could I get out of this? It was too late. So this was the club most women belonged to, and on which society built itself.”

The novel constantly returns to the theme of seeking a sense of belonging in a foreign land, an idea that British-Chinese Guo, who moved to London in 2002, has tackled in previous novels. “I knew that even if one day I could master a foreign language—one of the major European languages—I would still not become a primary citizen of the West,” the narrator of Discourse muses. 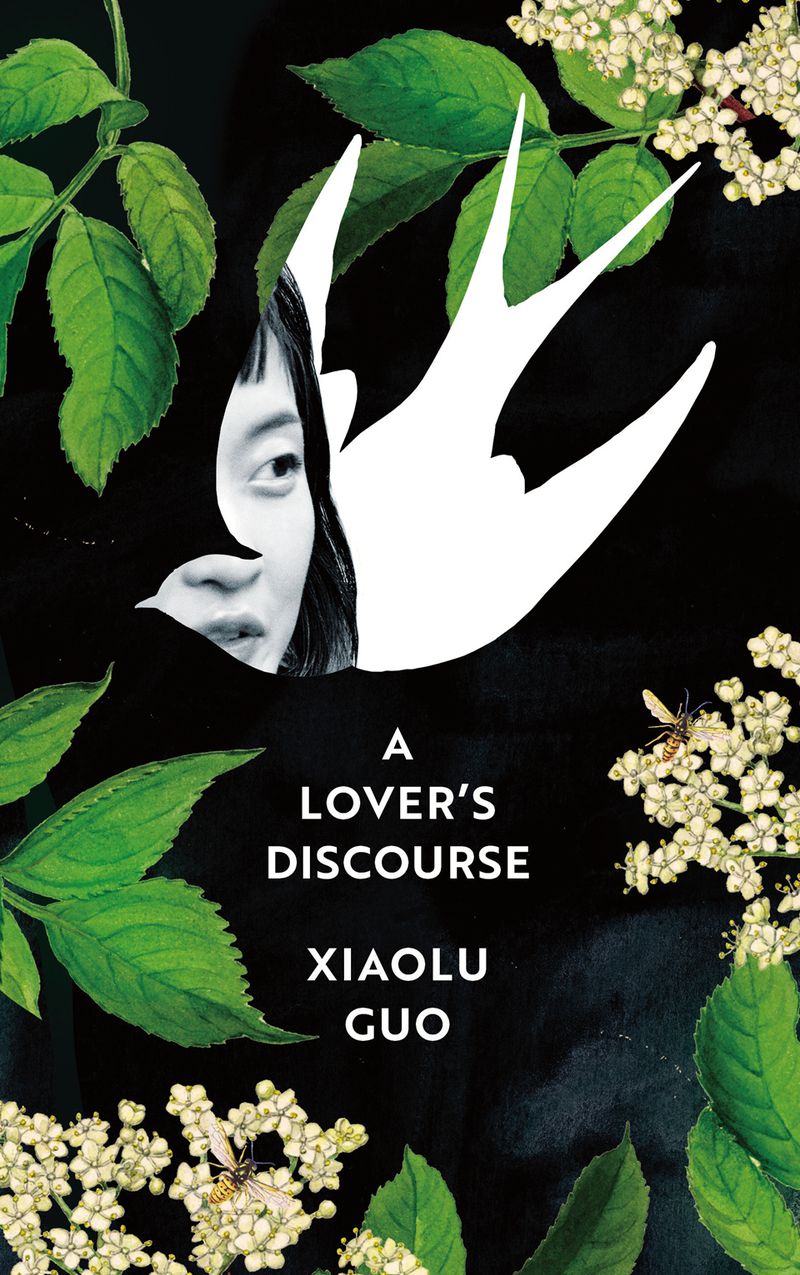 The narrator has no family left behind in China, nothing to return to, and nothing tying her to London apart from her studies. She feels “uprooted” and “transplanted” wherever she goes, and struggles to understand and forge her own identity. “How many times could one restart a life?”

The Brexit background to the novel is understated, and the narrator remains distant from the political maelstrom unfolding in the background. (“Perhaps no one really knew what was going on, including the current prime minister herself. And the Queen wouldn’t have a clue either. Apparently, she was still very much alive.”)

Discourse, though, touches on the alienation foreigners can face in a Britain that appears to have rejected immigrants. Everything about the gritty area in London where our narrator first lives “seemed to be sending out a message, saying: ‘Go home, jobless people. Go home, foreigners. Go home, losers.’”

Guo’s own background is one of dislocation. Born in Zhejiang province in 1973, Guo was given away by her parents to another family, before ending up with her grandparents in the poor fishing village of Shitang. There was little to eat, and her grandfather was violent.

At age 7, Guo properly met her parents for the first time and went to live with them in Wenling. She studied at the Beijing Film Academy in the 1990s, in the same class as now legendary director Jia Zhangke. She moved to the UK in 2002, gained citizenship, and has lived across Europe and in New York.

Guo is well-qualified to write about the alienation of leaving one’s homeland behind. But in Discourse, even when the narrator returns to southern China to conduct fieldwork, she still feels distanced. In Guangdong, she investigates the lives of painters who produce replicas of famous art for hotels, bars, and other customers, a topic that Guo previously tackled in her 2018 documentary Five Men and a Caravaggio.

Here, our narrator begins to ruminate on the true meaning of authenticity, reflecting that the Chinese painters are detached from the cultural and historical significance of the Western works they are reproducing, and that their perception of the reality described by each piece of art is warped.

When the narrator observes one painter working to replicate Da Vinci’s The Virgin of the Rocks, she comments, “they don’t know which one is Jesus and which is John. For them, knowing the difference is like knowing who is the General Secretary of State and who is Chairman of the Central Party Committee. It’s all the same anyway!” The discussion on what constitutes authenticity transposes itself onto the central relationship, as the narrator wonders whether it is ever possible to truly know one’s partner.

Guo has previously talked about “creating a hybrid voice” in her novels, and spends much time discussing the power of language, and the alienating feeling when one can’t find the words to express one’s feelings. The protagonist searches for English, Chinese, and German phrases to express herself but often they don’t seem to quite fit: “that language spoke for me, instead of my speaking it…I just wore it like clothes. Then it would abandon me when I die.”

Guo herself began her career writing in Chinese, before switching to English with 2008’s A Concise Chinese-English Dictionary for Lovers, told from the viewpoint of a student whose broken English narration gradually becomes fluent as she spends more time in the UK.

There are no real dramatic moments in Discourse, but Guo’s direct and unembellished writing style moves the story along at a pace, with short chapters that keep the momentum up by forcing meaning into every word. There is a welcome simplicity in Guo’s writing, but rarely a lack of depth in meaning. Nearly every chapter raises interesting questions for the reader to ponder, though some of these themes are dealt with so fleetingly that they appear unimportant, or even throwaway.

There are moments of levity and some of darkness as the couple’s love morphs from “a powerful distraction” to a committed partnership, despite the doubts that always linger. One chapter, in which the narrator recounts her harrowing experience of an abortion she had as a teenager, is a rare foray into the protagonist’s backstory. On the whole, though, Guo maintains the reader’s attention through the seeming precariousness of the relationship that unfolds before them.

By the end of the book there is still much uncertainty and much to ponder for the reader and the narrator. The lack of narrative extends to the book’s climax—we are still unsure of the true nature of “you,” and this makes the final chapter slightly jarring.

But perhaps this was Guo’s intent, suggesting that finding belonging, adapting to new cultures, and being in love, are all constant processes with no real end. The two lovers are still trying to fully understand each other and themselves. “Love exists only because one has illusions about the other,” the narrator comments, “though maybe this was the final illusion, that love could survive despite the dispelling of all one’s illusions about the other.”

Growing up in China before reform and opening up, 8-year-old Ting Lee receives a visit by Mini, her Shanghai-born American grandmother, for the first time. Ting is immediately bewitched by Mini’s charm and becomes curious about her life story. So begins a multigenerational tale of two Shanghai women searching for independence in their respective eras. Dina Gu Brumfield draws on her personal experiences for the novel, as she was born and raised in Shanghai, and came to the US as a young adult in the late 1980s.

To Hold up the Sky

This collection contains 10 widely popular short stories originally published in the late 1990s and early 2000s by Chinese sci-fi giant Liu Cixin. An obscure rural teacher leaves an important legacy that may stop an alien invasion. Two countries go to war and bring all of human civilization back to the age of pre-airwave. A powerful computer program simulates the past and predicts the future, leaving no room for crime—but will it benefit humankind? Liu once again takes readers on a journey through time and space, all deeply embedded in Chinese society.

Authored by Eugenia Lean, this nonfiction book explores the career of entrepreneur Chen Diexian, who built a cosmetics empire in early 20th century China through unconventional practices. Chen was both classically educated and trained in modern sciences. As a magazine editor, he shared knowledge about making cosmetics at home with his readers. As an amateur scientist and inventor, he sourced local ingredients, and adapted foreign manufacturing process based on experimentation. The book highlights the role that culture plays in the technological and industrial evolution of a society. – Liu Jue (刘珏)

Words of Love is a story from our issue, “Rural Rising.” To read the entire issue, become a subscriber and receive the full magazine. Alternatively, you can purchase the digital version from the App Store.