But after tasting the infamous dip, which saw thousands of Americans lining up and brawling in front of the fast food chain the previous year, Fang was baffled: “It’s not spicy at all, but overly sweet.” He was far from alone. Online comments, especially from Sichuan locals, repeated the sentiment. “It’s like hot pot soup with brown sugar, a taste you can’t quite describe,” wrote one netizen.

McDonalds’ sauce was “Szechuan” in name only, as Chinese customers discovered to their disappointment. Moreover, its initial popularity had nothing to do with Chinese flavors “conquering the world,” as patriots like Fang hoped. Rather, the craze was instigated by an episode of the popular adult sci-fi animation Rick and Morty, in which a time-traveling character expresses nostalgia for a limited-edition sauce offered by McDonalds in 1998, to promote Disney’s Mulan.

To make matters even more confusing, Mulan is a legendary heroine from fifth-century central-east China (now Henan province), and her story has nothing to do with either Sichuan or spice.

At least one Chinese chili sauce, though, has achieved legitimate attention overseas: Guizhou brand “Old Godmother,” or Laoganma (老干妈), is a household name in China. It offers a range of classic sauces from Spicy Chili Crisp to Black Bean Sauce, or douchi (豆豉), a traditional bean sauce made of fermented soy or black beans and chopped chili peppers. 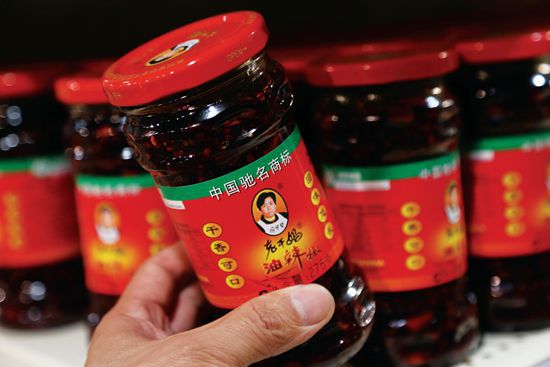 China’s most famous hot sauce, Laoganma, is on the shelves of almost every supermarket; its icon features a portrait of its founder, Tao Huabi (VCG)

Available in almost every Chinese supermarket in the world (it retails for around nine USD a jar on Amazon), Laoganma even has a Facebook page, “The Lao Gan Ma Appreciation Society.” Earlier this year, Mia Leimkuhler, the editor of New York magazine’s e-commerce vertical, The Strategist, wrote that she “would panic without five jars of Laoganma’s Spicy Chili Crisp” in her pantry.

At first taste, Laoganma is quite different from chili sauces that are already internationally known—vinegar-based liquids such as Tabasco or Sriracha. Instead, like many Chinese sauces, it’s a thick, oily paste with flakes of fried or pickled chili peppers and other ingredients like beans, peanuts, and meat. Chinese chili sauces are rarely overly spicy; it’s not the Scoville Units that make them special, but the overall savory taste.

This is partly because Chinese chili sauce is eaten differently: Though in some cases, it’s used for dipping, mostly it’s used in cooking or blended with rice or noodles to make a quick savory snack. Laoganma’s nickname is 下饭神器 (“magical rice-improving device”). For Chinese living or traveling aboard, a spoonful of it is a taste of home.

“You ask me how many countries the sauce is sold in? I can only tell you, wherever there’s Chinese, there’s Laoganma,” the brand’s then 70-year-old founder Tao Huabi told China News in 2017. The story goes that, 29 years ago, a widowed Tao started a small diner selling homemade cold noodles to passing truck drivers in order to support her two children, and added her own sauce to spice up the noodles. 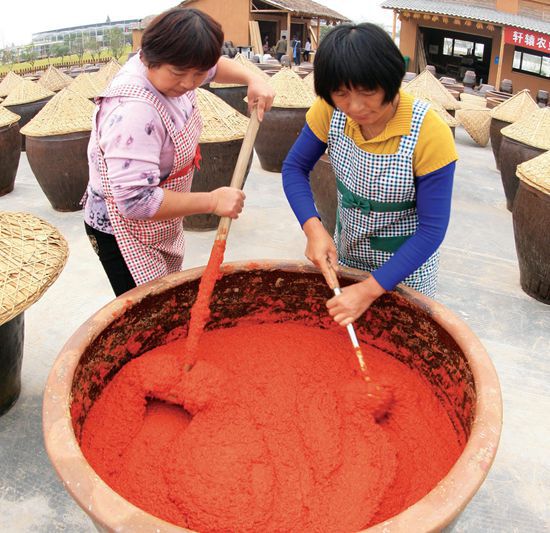 Before long, she realized the sauce was what was attracting her customers. In 1996, after years of testing and preparation, Tao opened a factory with 40 workers to manufacturer and bottle it. Today, over two million bottles of Laoganma are sold daily, and Tao herself is now a member of the Standing Committee of the People’s Congress of Guizhou, not to mention a pop culture icon: She was jokingly dubbed “China’s hottest woman,” and, by the post-90s generation, the “goddess of shut-in boys” (宅男女神) .

While currently the largest chili-producing, consuming and exporting country in the world, China incorporated peppers to its palate relatively recently. Back in the 17th century, chilies, along with corn and sweet potato, made their way from Central America to the southeastern coast of China via the Maritime Silk Road. In southwest China, chili is still called “sea pepper” or 海椒, rather than “spicy pepper” (辣椒) as in standard Mandarin.

Even then, the chili was initially seen as an ornamental plant. Neither Sichuan nor Hunan—both provinces now famous for their fiery food—were first to jump on the chili train. That honor belongs to the remote hilly region of Guizhou, the home of Laoganma, which, during the early Qing dynasty (1616 – 1911), was very much closed-off to the outside world. Moreover, a government monopoly had made salt expensive and highly sought after.

A farmer from Anhui province dries chili peppers during harvest season; Though they do not play a major role in Anhui cuisine, the province is one of the largest chili pepper-producing areas in the country (VCG)

According to a local chronicler, writing in 1722, “Sea pepper, which folks named ‘spicy fire,’ was used to replace salt in the indigenous Miao people’s diet.” The hot habit soon spread to adjacent Yunnan and Hunan provinces. When the government encouraged large-scale migration northward from Hunan to replenish the population after local conflicts, chilis finally made it to Sichuan, where, gradually, they came to dominate the local diet.

Sichuan spices were popularized by blue-collar workers whose daily diet of meat mainly included organs, chicken feet, goose intestines, and other less savory parts that were cast off from the slaughterhouse. Strong spices were used to cover any unpleasant smell and turn these rubbery offcuts into flavorful, chewy delights.

The powerful, often numbing sensation of chili drew unfavorable comparisons with the tastes of the wealthy and cultured class, represented by Zhejiang cuisine with its emphasis on fresh ingredients and natural, delicate flavors. Even today, there are food snobs who still view spicy sauce as a cheap, even unhealthy solution to a working-class craving. It doesn’t help that Traditional Chinese Medicine also insists on a mysterious connection between eating chili and “having inner fire” or 上火.

Folk cures in TCM argue that when, taking medicine, recovering from illness, or even dealing with a wound, spicy food can cause such health to deteriorate, and should thus be avoided. Like many TCM claims, it is without much scientific basis, but such ancient associations have arguably had a detrimental effect on the modern spice’s standing.

If Laoganma represents the quintessential Guizhou flavor (even though the brand only uses chili peppers grown in Henan, due to cost), then Pixian Bean Sauce (郫县豆瓣) is associated with Sichuan. Now considered part of China’s “intangible cultural heritage,” the sauce was invented in the mid-19th century by Chen Shouxin, and later produced and sold in large quantities. Unlike Laoganma’s oleaginous paste, Pixian Bean Sauce does not contain oil, but is bright red with finely chopped peppers and broad beans. It can be a dipping sauce, but more often it is used in the preparation of a wide variety of Sichuan dishes.

Another Sichuanese spicy solution is the pickled chili pepper, or paojiao (泡椒), which is made with thick, long peppers called erjingtiao (二荆条). The peppers stay bright after pickling, and give a mild, gentle burn. Finely chopped and mixed with other ingredients, the paojiao sauce is also responsible for the unique “fish flavor” (鱼香) that is associated with Sichuan cuisine.

Finally, there is the classic chili oil, or hongyou (红油, “red oil”) dried chili flakes and seeds steeped in peanut oil. Though every household has its own recipe, this Sichuan essential has made its way into nearly every small restaurant in China.

The other chili-eating provinces have their own hot sauces: Hunan features the chopped chili, or doujiao (剁椒), used to steam fish heads, a local delicacy; Guangxi’s Guilin chili sauce uses garlic for added flavor. In the southernmost province of Hainan, a local yellow bell pepper sauce has made a name for itself because of its unusually high degree of spiciness—150,000 Scovilles.

While peppers are now the third most commonly grown vegetable in China after cabbage and potato, and exported to countries including the US and Canada, according to the Chili Industry Forum in 2017, domestic processing is currently fairly unsophisticated, mostly involving local farmers drying peppers under the sun and grinding them into chili powder. 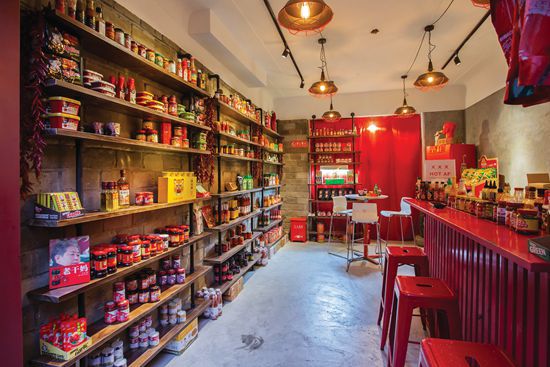 In the meantime, a large market is emerging among the younger generation for non-traditional spicy sauces they might have seen, tasted, or heard about from Western culture. In 2016, three chili-lovers from the US and China opened a sauce shop and museum in Shanghai called Hot Box. Stocked with over 85 different hot sauces from all over the world, including its own artisanal sauces, Hot Box is aiming to build China’s own “Pepper Place” in a largely vacant market, and has so far met with warm welcome. In 2014, singer Allen Lin launched his own hot sauce brand targeted at young people, “Fanye”; it is now worth 360 million RMB. The future of chili sauce in China looks like it will only grow hotter.

Hot and Saucy is a story from our issue, “Modern Family.” To read the entire issue, become a subscriber and receive the full magazine. Alternatively, you can purchase the digital version from the App Store.