In November, Dolce & Gabbana saw sales plummet over an offensive Shanghai runway show ad. Among charges of sexism, racism, and general sleaze, the Italian fashion house was accused of cheap orientalism by depicting a model eating Italian food with chopsticks—and using them wrong.

Smarting over D&G’s jab at the “small stick-like things,” CCTV re-uploaded “Chopsticks” to Weibo. The five-minute public service announcement, which originally aired in 2014, showed chopsticks as a symbol of love. “A pair of chopsticks bears Chinese people’s feelings and memory,” the state broadcaster tweeted.

How did chopsticks become the quintessential Chinese utensil, though? According to archeological evidence, chopsticks have a history of at least 3,000 years. The oldest pair to date was unearthed from the Yin Ruins of Henan province, dating roughly back to 1,200 BCE. At 26 centimeters long, the bronze utensils were believed to have been used for cooking—reaching deep into pots of boiling oil or water to stir the food— rather than eating. 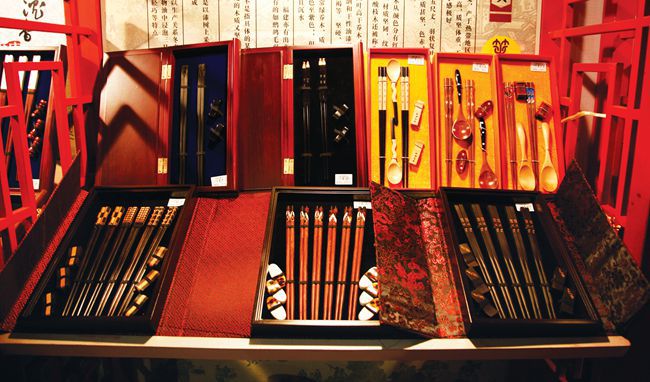 Chopsticks on display at a folk arts expo in Beijing

During this period, the chopsticks were called “梜,” with the radical “木 (wood)” indicating its texture, and “夾” referring to the act of pinching. During the Han dynasty (206 BCE – 220 CE), the character changed to “箸” (which is still how chopsticks are written in Japanese). In Beans Garden Notes (《菽园杂记》), Ming (1368 – 1644) scholar Lu Rong (陆容) alleged that “箸” was homonymous with “住,” which means “stop.” A foundering ship is disastrous for fishermen, so the character was then changed to “快” (fast) by people living in coastal areas, praying for a smoother voyage. The bamboo radical was later added, making it “筷”, which reflects the most commonly used material for chopstick construction, although chopsticks can be made from a range of materials.

Bronze was used in the Shang (1600 – 1046 BCE) and Zhou (1046 – 256 BCE) dynasties, while lacquered wooden varieties appeared to be most popular in the Han dynasty. Chopsticks made of ivory, horn, and bone had also been discovered, while during the Sui (581 – 618) and Tang (618 – 907) dynasties, the wealthy would use gold and silver to make chopsticks. In the novel Anecdotes of the Emperor Xuanzong of Tang (《开元天宝遗事》), the eponymous emperor gifts a pair of golden chopsticks to his prime minister Song Jing (宋璟), saying: “The gold isn’t your reward; the essential part is the chopsticks, which symbolize your integrity.” Today, the most common materials include stainless steel, titanium, porcelain, plastic, and melamine.

There is no reliable information on how or why chopsticks became so popular, though. A widespread tale attributes them to the legendary first emperor of the Xia dynasty (c.2070 – 1600 BCE), Yu the Great (大禹), who was said to be so busy fighting floods that he barely had time to eat. When a pot of meat was boiled for him, Yu grabbed two tree branches of similar length so he didn’t have to wait for his meal to cool; people imitated him, and the prototype chopstick was born.

Lan Xiang, the owner of a chopstick museum in Shanghai that boasts over 2,000 types in its collection, believes the legend makes some sense whether or not Yu existed. “That boiled food was too hot for bare hands was indeed a likely trigger for the invention of chopsticks,” Lan wrote in his 1999 book Three Thousand Years of Chopsticks, “but folktales have credited the long process of people exploring and making chopsticks to Yu alone.”

No matter the actual inventor, chopsticks are seen by Chinese as integral to their civilization. Early 20th century writer and translator Liang Shiqiu wrote in his essay “Table and Chopsticks” that “a pair of chopsticks can be seen as extension of hands, a step further than apes using branches to handle things.”

An American adoptee learns to use chopsticks from her birth parents

Some Western scholars have speculated on how chopstick usage reflects the differences between Eastern and Western culture. “Chopsticks are the converse of our knife (and of its substitute, the fork): they are the alimentary instrument which refuses to cut, to pierce, to mutilate, to trip,” wrote Roland Barthes in Empire of Signs. “By chopsticks, food becomes no longer a prey to which one does violence, but a substance harmoniously transferred.”

Chinese also believe that chopsticks carry profound cultural connotations. A common myth declares that the round tip and the square head of chopsticks represent the Chinese view of the universe—the round heavens and square earth. The standard length of 7.6 cun (roughly 3.33 cm) is said to symbolize people’s “seven emotions and six sensory pleasures,” while the fact that chopsticks come in pairs supposedly conforms to the principle of yin and yang.

Regardless of any mythical significance, chopsticks play an important role in wedding and funerary customs. Even today, a pair of chopsticks remains an essential dowry item in some regions because “筷子” sounds homonymous with “quickly have a son.” Chopsticks are also sometimes buried with the dead to guarantee that they do not go hungry in the afterlife.

The influential utensil, however, isn’t without controversy. In 1990s, disposable chopsticks were introduced from Japan to China, leading to widespread deforestation. Bo Guangxin, chairman of state-owned timber firm Jilin Forest Industry, declared at a meeting of the National People’s Congress in 2013 that “20 million 20-year-old trees” are chopped down each year to make about 80 million pairs of disposable chopsticks.

Environmentalists have been urging people to avoid using disposable chopsticks, but the situation may have even worsened with the rise of the food delivery industry. In January 2019, Shanghai authorities drafted new rules, effective in July, banning restaurants from providing disposable utensils unless the customer asks for them. In the future, perhaps, everyone will carry around a pair of chopsticks of their own—a solution which Yu the Great would surely have admired.

Don’t suck on the end of the chopstick

When sharing a communal dish, don’t use chopsticks to dig for the food at the bottom of the plate; this is known as “grave-digging” and is considered unhygienic

Never use chopsticks to point at others

Don’t stick chopsticks upright in a bowl of rice; this resembles the incense that people burn for the dead

Chopped! is a story from our issue, “China Chic.” To read the entire issue, become a subscriber and receive the full magazine. Alternatively, you can purchase the digital version from the App Store.