Eating insects might be the world’s next culinary trend, as concerns about an impending global food shortage and the ecological impact of farming lead experts to consider alternative food sources.

With over 3,000 years of cooking insects, the Chinese have long recognized insects’ nutritional value. Ants, cicada, and bees were prepared for imperial offerings and banquets, according to Chinese classics like Erya (《尔雅》), The Rites of Zhou (《周礼》) and The Book of Rites (《礼记》).

As the world’s third largest market for insect consumption today, China is said to have over 100 consumable insect species. Want to try a few?

Cicadas may be an annoyance for their day-long chirping of “zhiliao, zhiliao…” (from which their Chinese name, 知了, is derived). However, for many in Guangdong, Jiangsu, Anhui, Shandong, Henan provinces, as well as Dongbei (the three provinces in northeastern China), cicadas are considered a delicacy.

Fried or roasted cicadas might win the prize for China’s most popular insect snack. They can be eaten when fully grown or, more often, as pupae, known as zhiliao hou (知了猴). On Q&A platform Zhihu, many users who grew up in the countryside have shared their childhood memories of catching the insect to eat. The snack is so popular that some cities in Zhejiang and Shandong were reported have nearly exhausted the local cicada supply last year, and have to rely on outside imports.

Last summer, the Greening Management Division of the city of Hangzhou asked for foodies’ help to control invasive cicadas that were killing plants, attracting nationwide interest:

Eight hundred warriors from Guangdong province will take care of the problem within one week. [Editor’s note: the Cantonese are assumed to eat everything.] (Weibo)

Grasshoppers, known as huángchóng (蝗虫) or màzhà (蚂蚱 ), have been consumed since ancient times. Emperor Taizong of the Tang dynasty (618-907) purportedly ate them raw. Grasshopper-eating was a common practice in many locales in ancient China, and doubled as a form of pest control.

Today, fried grasshoppers are eaten in northern China, including Beijing, Tianjin, Henan, and Shandong. Eating them is believed to help relieve cough and asthma. The snack is so popular that Dou Lixiu, a fried grasshopper fan-turned-dealer in Cangzhou, Hebei, earns a yearly income of 500,000 RMB from the 120,000 creepy crawlies she farms, according to The Paper.

The method of preparing grasshoppers also works for other insects, like dragonflies, crickets, and diving beetles.

Both insects and worms are referred to as 虫 (chóng) in Chinese. In Guangxi, whose people are said to be more adventurous eaters than those of neighboring Guangdong, (raw) earthworms, silkworm pupae, peanut worms, and bamboo worms are popular. In addition to their high protein and other nutritional value, they also taste good, the locals insist.

Though excluded in the “Eight Cuisines of China,” Yunnan cuisine stands out for its “ecological” fare. A local saying supposedly goes, “The green (plants) are all vegetables, and the (creatures) that move are meat.” Insects are consumed en masse, including the dragonfly larva, golden cicada, and Oriental carpenter bee. The infamous “1,000-insect and worm banquet” includes both fried and non-fried selections, including a cold dish made up of the eggs of yellow ants, seasoned with salt, chili, chopped leek root, and mashed garlic. Yum.

Want to try some of these, but can’t find them at the local market? Don’t worry; most of insect dishes, both fresh and already cooked, are available (and popular) on online shopping platforms. 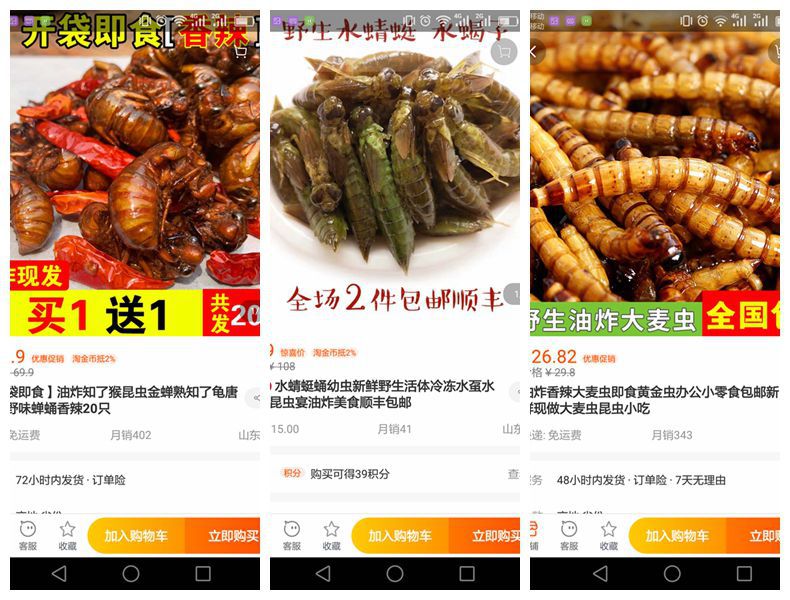 A sweet, southern holiday tradition to sate your palate The central dish on Chinese tables has many regional varieties