“Toys are angels to children,” Chinese writer Lu Xun commented in his 1925 essay “Kites.” He might have included adults as well, if he had lived to see their present-day addiction to “blind boxes,” a part of the growing market of designer toys in China.

Originated in Japan in the 1980s, “blind boxes” are unmarked boxes that contain miniature toys or figures, often released in 12-character series based on existing cartoons or original designs. They can be sold online, in stores, or in retro vending machines that randomize the purchase, with part of the fun being that the purchaser cannot tell which figure they will be getting.

Some of Hannah’s collection

Pop Mart, the leading designer toy producer and retailer in China, has launched over 700 offline sales outlets in the last decade, comprising 120 stores and nearly 600 vending machines at shopping malls across 52 cities. According to shopping site Tmall, 55,000 boxes of the LABUBU mini series were sold out in 9 seconds on Pop Mart’s online shop on November 11 shopping festival this  year.

A Shanghai financial professional in her 30s, who gave her surname as Zhang, tells TWOC that she started buying blind boxes after seeing a “Sonny Angel” toy at a store three years ago, co-designed by a Japanese brand of the same name and Pop Mart. She especially likes to pick up a box or two after a long day at work. “Amid the stress of work and life, it’s kind of a relief to see cute things,” Zhang explains, saying that she has gotten “into the pit” (入坑), a trendy online slang for “hooked.” 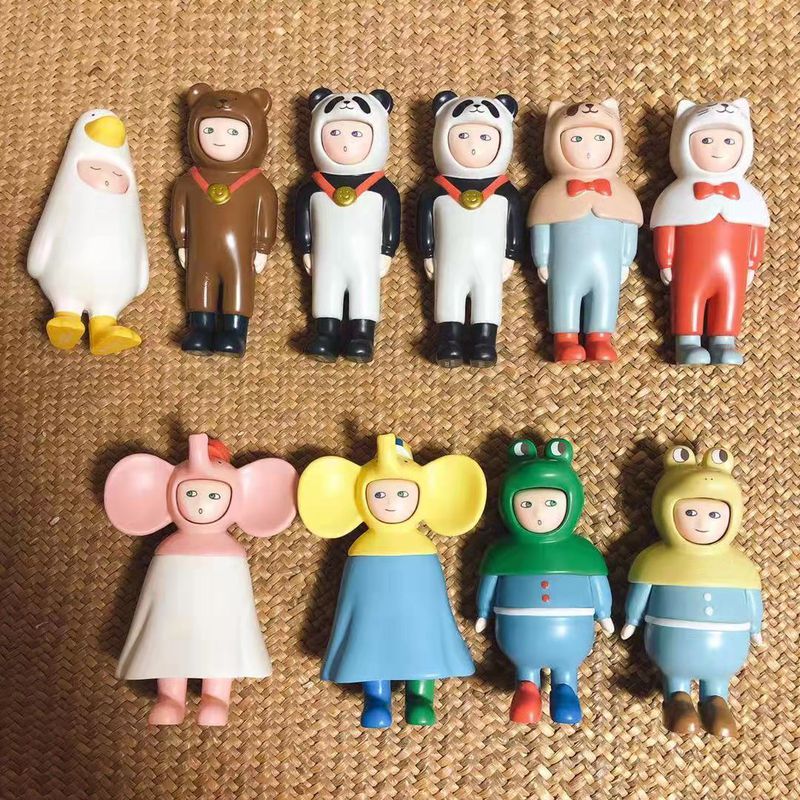 Following images, including this one, display part of Zhang’s collection

“Hannah” (pseudonym), a 25-year-old marketing personnel in Beijing, agrees, calling her hobby emotionally “healing.” Since trying her luck for the first time in October, and getting a “Molly” astronaut figure she liked, she has spent about 2,000 RMB to buy over 30 boxes at stores or designer-toy trading apps and mini-apps, such as Chaowanzu (潮玩族, “Art Toy Group”).

Hannah compares her love of the toys to children who turn to dolls for comfort and escapism. But the emotional highs (and lows) are greater for blind boxes due to their “gambling” nature. “The joy multiplies when you open the box to find a popular or desired model, and decreases for an unpopular or repeated model [you already own],” she explains. Though all blind boxes in a series are the same size and are sold at the same price, ranging from 39 to 69 RMB, the designs within a series are ranked as “minefield” (雷款, unpopular), basic, popular, and “hidden” (隐藏款) models with a mystery design and limited supply. The hidden model is said to be accessible at a rate of 1 to 144; in theory, fans can only be sure of getting one if they purchase a whole “package,” or 12 sets of 12 boxes of a series, at the cost of 8,496 RMB.

Ideally, fans wish to collect 12 designs of a whole series, plus the hidden model, without repetition, which urges them to buy more. A list of the most expensive hobbies of the “post-95” generation released by Tmall in August showed there were nearly 200,000 users of the e-commerce platform who spend over 20,000 RMB on blind boxes each year, with some spending up to millions. Having now spent about 20,000 RMB on more than 300 blind boxes, Zhang still considers herself a rational buyer. She will buy a set of 12 boxes at one time only if she likes the toys, and not simply for the sake of buying.

But for many fans, the joy lies in the anticipation before opening the box, and the excitement or disappointment that follows. Zhang has seen players buying a whole package at a time, or opening one box after another at the store until they find their desired model.

The need to dispose of repeated toys and swap them for a desired model has also created a booming market for secondhand blind boxes. According to the secondhand trading app Xianyu, over 300,000 users traded blind boxes on the platform in 2019. A hidden model of the LABUBU series, with a retail price of 59 RMB, was marked up at 4,999 RMB; toy “scalpers” have reportedly been buying up entire series to resell for a profit. According to Zhang and Hannah, though, most fans they know simply love the game or toys, and are sane enough not to blow all their savings on a single box. On “toy pal” groups on WeChat and QQ, fans share information about new releases, exchange models, and advise one another on where to buy and how to find a popular or limited model more easily. In one WeChat group with over 400 members, TWOC found around 4,000 such messages posted in one day.

In a recent China Youth Daily survey on why purchasers buy blind boxes, 48 percent say they enjoy the feeling of winning and cannot stop buying; 21.7 percent buy as an investment; 16.4 percent for “emotional healing” or social purposes; and 13.8 percent are just following a fad.

Zhang has now branched out to “art toys,” which are often released only at toy expos and feature better designs and material than the typical blind box—and a higher price tag. Compared with a 700 to 800 RMB series of blind boxes, the most expensive designer toy Zhang owns cost her 5,000 RMB.

Given the high costs of her hobby, Hannah has tried to quit. However, she started collecting again after her coworkers convinced her that buying toys was much healthier than drinking, smoking, and video games. “After all,” she reflects, “we need an outlet from the pressure of work and life.”

Cover image by courtesy of Zhang