It’s said that there’s no food in Hakka cuisine that can’t be niang (酿, niàng)—stuffed with meat, then braised or steamed. The classic Hakka cooking method was allegedly derived from the itinerant people’s love of jiaozi. However, there was no flour available for making these traditional northern dumplings once the Hakka migrated to southern China.

Instead, they made do by stuffing other things: Today, tofu, eggplant, and bitter melon are the three most niang-ed dishes in Hakka cuisine, and stuffed bitter melon, or niang kugua (酿苦瓜), is particularly renowned for its medicinal properties and refreshing taste in the summer.

It’s also the toughest to get excited about, as the singular flavor of kugua makes it a deeply divisive dish. Bitter melon was first recorded in Jiuhuang Bencao (《救荒本草》), a 15th century manual on herbs and foods to eat during a famine. It was believed to have been brought to China from Southeast Asia in the early Ming dynasty—specifically, some legends say, by naval explorer Zheng He.

In Diannan Bencao (《滇南本草》), a Ming TCM almanac, bitter melon is recommended for “clearing the pathogenic heat…[and] relieving summer heat, tension and thirst,” among other functions. Once only grown in the mild regions of the south  for harvest between July and October, bitter melon is now consumed year-round all over China once it’s turned green or slightly yellow.

Niang kugua is popular in major Hakka settlement regions—Guangdong, Guangxi, Jiangxi, and Fujian—as well as Hunan and Sichuan provinces. The fiber and protein-rich melon is also called junzi cai (君子菜, “noble food”) since, ideally, the melon does not transfer its bitterness, but gives the other ingredients a fresher aroma and flavor. However, those who follow TCM guidelines on “hot” and “cool” foods should avoid eating too much kugua at one sitting, especially if they suffer from a yang deficiency.

Some recipes recommend curing the melon with salt, or blanching it in water, to alleviate the bitter taste before cooking. Others find this a sacrilege. As journalist and writer Li Junwei comments in his essay “Eating Bitter Melon,” taking any steps to eliminate the bitterness is like “buying the box and discarding the pearls.” 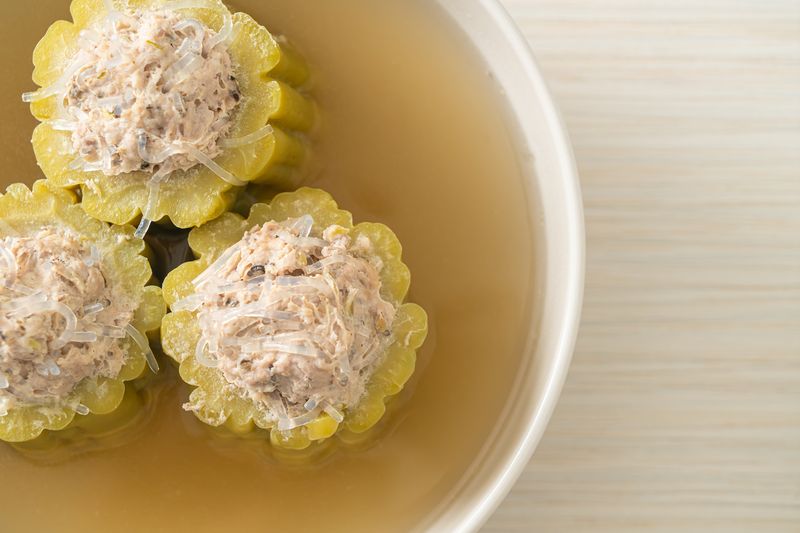 Eating Bitter is a story from our issue, “The Good Life.” To read the entire issue, become a subscriber and receive the full magazine. Alternatively, you can purchase the digital version from the App Store. Not Your Average Zhou

A look at China’s favorite sweet porridge, the ‘laba’ or Buddha porridge