According to the early 20th century historian and economist Zhu Xie, “Of all the four ancient Chinese capitals, none compares to Jinling when it comes to literary prosperity, celebrated individuals…and its connection with the struggles and progress of the nation.”

Though the ancient city is now known as Nanjing, and demoted from being the nation’s capital to the capital of Jiangsu province, it continues to be revered for its long history as the economic, cultural, and political center of China. The southern burg is now known for its important historical sites, well-preserved ancient architecture, and rich cuisine—as well as a unique dialect that can sound either elegant or down-to-earth as the occasion demands.

Nanjing is deeply influenced by the wider Jiangnan culture in the fertile plains south of the Yangtze River, which was a prospering commercial hub in ancient times. The Wu dialect (which also encompasses the speech of Shaoxing and Shanghai) had become prevalent in this region by the time of the Western Jin dynasty (265 – 317), with the Nanjing variety distinguished by its soft pronunciation, similar to the dialect spoken in today’s Suzhou.

During a series of rebellions and invasions from northern tribes during the fourth and fifth centuries, the imperial household of the Jin relocated from the northern “Central Plains” to the Jiangnan region, and declared Nanjing as their new capital. Han culture and dialect migrated with them, creating a unique cultural mix as well as the “Jinling Formal Speech (金陵雅言),” which became the official language of the Jin.

Nanjing dialect, or Nankinese, was considered “standard” Chinese all the way up until the Qing dynasty (1616 – 1911), when the Yongzheng Emperor changed the official language to the Beijing variant. When China was split between the Northern and Southern dynasties (420 – 589), Nanjing was revered as a bastion of Han culture in contrast to the “barbarian” northern tribes, and the language was considered the purest of China’s dialects. During the Sui (581 – 618), Tang (618 – 907), and Song (960 – 1279) dynasties, official texts on correct pronunciation and languge use all took Nankinese as the model.

Nanjing also served as the capital during the Ming dynasty (1368 – 1644) and the Republic of China. The local dialect was even exported abroad: In Japan, Nankinese was taught as standard Chinese from the Edo period (1603 – 1868). Early missionaries from the US to China also learned it as the official language. 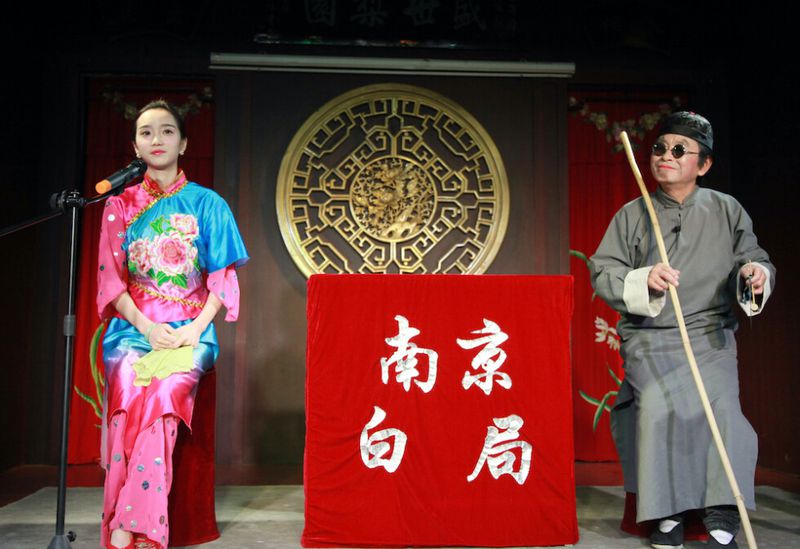 Nanjing baiju is a genre of oral storytelling performed in Nanjing dialect, usually in a teahouse

Today, Nankinese shares much in common with standard Mandarin, and may be easier for those speakers to understand than other Wu dialects. There are some important differences, however:

Some classic Nankinese expressions are as follows:

How about some chili oil?

This question is a typical one when taking a meal in a Nanjing restaurant. “啊” in Nankinese serves as an interrogative particle, used at both the beginning and end of the question. The phrase “Have you eaten yet? (啊吃过啦？Á chī guò là?)” is constructed in the same way.

Where will you go today?

Besides “have you eaten yet?”, this sentence is one of the most frequently used greetings between Nanjingers.

Wow, did you think you did a good job? It seems that you can do it on your own?

This sentence is used to criticize someone for showing-off. 翅膀硬了, literally “your wings are hard,” implies arrogance. Often said by elders to children, or by superiors to their subordinates.

Who are you troubling? So disgusting!

A phrase to express anger at someone’s behavior.

Though Jiangnan culture is usually renowned for leisure, this phrase is often used by Nanjingers in a hurry.

All Images from VCG