A starchy snack that relieves the heat of summer

“Sour, salty, spicy, aromatic! More refreshing than ice! A bowl of it would bring you to heaven (酸,咸,麻辣香,解暑胜冰凉，若能吃一碗，犹如进天堂)!” This chant of a vendor, heard by the Xianfeng Emperor of the late Qing dynasty (1616 – 1911) one summer’s day, was said to have drawn the Son of Heaven out of his cool retreat at the Chengde Mountain Resort and into the sweltering streets.

As the legend goes, the emperor, approaching the vendor’s stall incognito, wolfed down two bowls of liangfen (凉粉, “cold starch-noodles”) in a row. Since he had no money on him, the emperor left behind his jacket and asked the stall’s owner to come to the resort for his payment; when the lucky vendor made his visit the next day, he got 300 taels of silver and a job teaching the imperial cooks how to prepare the tasty dish.

The same features that attracted the emperor give liangfen its enduring appeal to this day. A liangfen stall is a tempting sight on a hot day, displaying bowls of jade-green bean jelly surrounded by colorful containers of sesame paste, chili oil, mashed garlic, and soy sauce. Tipped into the mouth, the jelly feels cool and smooth, and slips down the throat with a refreshing kick. Though recipes vary across the country, the semi-translucent jelly is generally made from pea, rice, mung bean, or potato starch, and served in the form of slices, cubes, or noodles mixed with different seasonings. For instance, Cantonese liangfen, made of rice flour and a fragrant herb known as liangfen cao (凉粉草, liangfen grass), is typically dark, and goes with honey and sugar, or soy sauce and chili oil.

The earliest record of liangfen consumption appeared in The Eastern Capital: A Dream of Splendor (《东京梦华录》), a memoir by Northern Song (960 – 1127) scholar Meng Yuanlao on the former capital, Kaifeng, in present-day Henan province. The exact origin of the snack is untraceable, and each variation has its own story. The cream-colored shangxin liangfen (伤心凉粉), literally “heartbreak liangfen,” is a popular Sichuan dish believed to have developed in Anyue county in the early 1900s, and embodies the spiciness, aromatic flavors, and crispiness of Sichuanese cuisine.

There are two popular explanations for its name: one says that the dish was created by Hakka migrants from Guangdong and eaten when they were homesick, while another theory says it’s the spiciness of the snack that reduces the eater to tears, as if their heart is broken.

Despite its name, slurping on shangxin liangfen usually brings happiness; in addition to its deliciousness, the snacks helps relieve the heat, whet the appetite, and dispel metabolic waste via perspiration. Those who cannot handle spicy food can customize the recipe to taste. 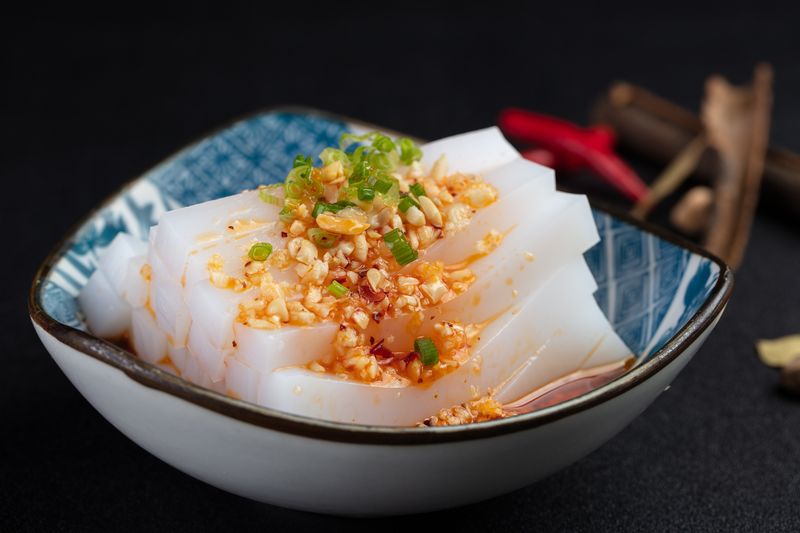 Cool Beans is a story from our issue, “High Steaks.” To read the entire issue, become a subscriber and receive the full magazine. Alternatively, you can purchase the digital version from the App Store.