“Better to have no meat to eat than live where there are no bamboos/ A lack of meat makes one thin, while a lack of bamboo renders one vulgar,” the poet and gourmand Su Shi opined in the 11th century, invoking a traditional comparison between the tough, unyielding bamboo and the Confucian junzi (君子, gentleman).

Even the most virtuous sages, though, may crave some animal protein in their diet once in a while. This moral dilemma was resolved five centuries later by Li Yu, another writer and foodie who recorded a dish called “bamboo shoots with meat” in his book Leisure Writings (《闲情偶记》). But rather than the full-grown varieties, Li recommended using “immature” bamboos due to their soft texture and smooth taste.

Bamboo shoots, known as zhusun (竹笋) or simply sun (笋) in Chinese, have been eaten for at least 3,000 years in China. The ancient Book of Songs (《诗经》) stated that bamboo shoots were excellent vegetables to serve at farewell dinners. Tang dynasty (618 – 907) poet Bai Juyi wrote that if he could eat bamboo shoots daily, “I wouldn’t miss meat for long.” In Li Yu’s opinion, “Even lamb and pork are incomparable to this top-grade vegetable.”

Bamboo shoots mainly grow in the warm climates of central and southern China, including Zhejiang, Hunan, and Sichuan provinces. Song dynasty (960 – 1279) monk and scholar Zan Ning listed 98 varieties of the plant in his Book of Bamboo Shoots (《笋谱》). Most commonly, though, they are sold in several broad varieties: “spring shoots” (春笋) and “winter shoots” (冬笋), according to their two major harvest seasons; or “small shoots” and “big shoots” with a diameter roughly equal to one finger or one fist.

Spring shoots, which are picked after Lichun (立春, “spring begins”), the first solar term of the lunar new year (usually in February or March), are dubbed the “king” of spring foods for their tender and crisp taste. “Fresh and fragrant bamboo shoots are valued more than gold on Yuling’s markets,” claimed the Tang poet Li Shangyin. Emperor Taizong of the Tang, a fan of sun, reportedly treated officials with a “bamboo shoot banquet” each spring.

Bamboo shoots go equally well with vegetables or meat, but Li Yu preferred them “cooked in clean water or with fatty pork.” This may be the theory behind the Hunan dish “bamboo shoots fried with bacon” (竹笋炒腊肉), which pairs the aromatic spring vegetable with the streaky pork that Hunanese usually cure and preserve at home in winter. Hunan bacon is known for its special fragrance, chewy lean meat, and non-greasy fat. Bamboo shoots with white stems are preferred in this recipe over those with yellow and green stems. 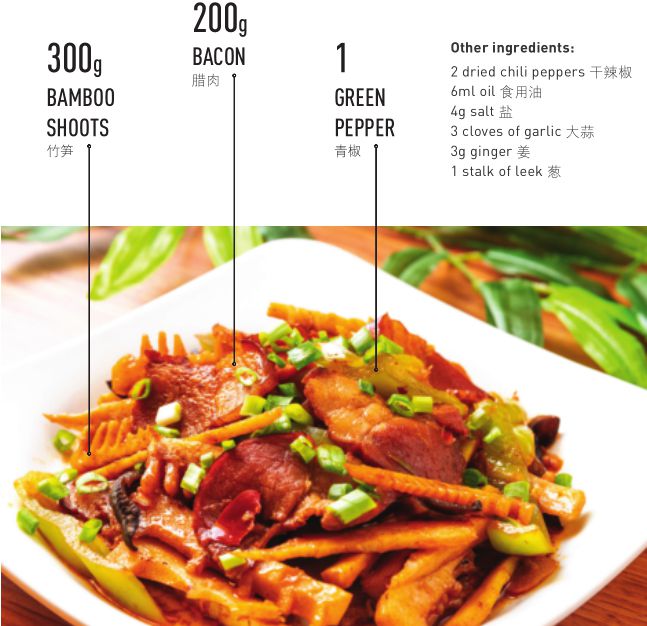 Shoots of Spring is a story from our issue, “Contagion.” To read the entire issue, become a subscriber and receive the full magazine. Alternatively, you can purchase the digital version from the App Store.