When Wang Jian moved to Beijing from Sichuan province 10 years ago, he made a beeline for Quanjude restaurant to try its roast duck. “More than the taste, it gave me a kind of classy feeling with the traditional furnishings, the high price, and how the waiter sliced the duck by my side,” he recalls, though he cannot now remember what exactly he ordered—or paid.

Since then, the IT engineer in his 30s has returned to the restaurant several times with visiting family members and friends, most of whom are familiar with the Beijing tourism slogan, “One cannot be a real man without climbing the Great Wall; one cannot help but regret if one does not try Peking roast duck.” For decades, Quanjude has been almost synonymous with Beijing’s signature dish, ever since Premier Zhou Enlai hosted 27 state banquets at the 156-year-old restaurant to receive foreign dignitaries such as US President Richard Nixon and Secretary of State Henry Kissinger.

In recent years, however, Beijing natives and more experienced tourists seem to be losing their taste for the roast duck chain, adding their own twist to the saying, “One cannot help but regret eating at Quanjude.” In July, the company reported that it lost 139 to 152 million RMB in revenue in the first half of 2020. This opened the floodgates for the public to complain about various signs of the brand’s decline, including its overrated taste, poor service, and high prices. 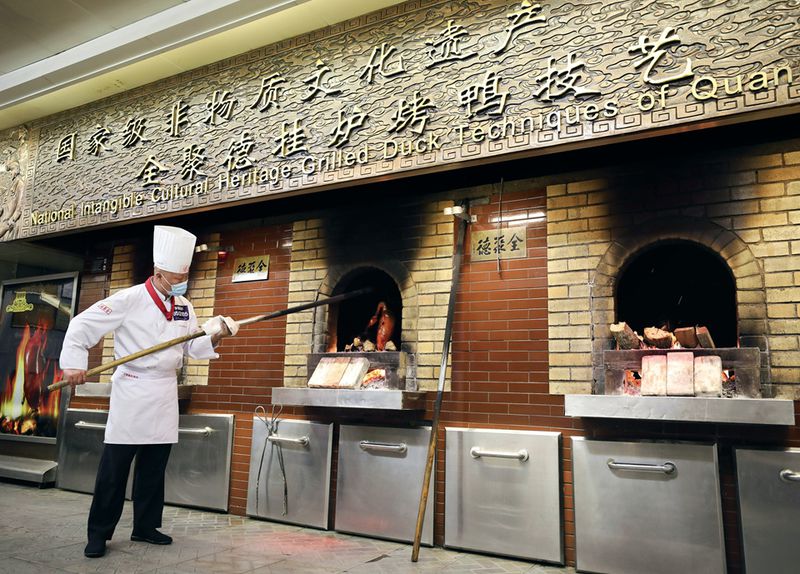 Two months previous, the company behind Tianjin’s 162-year-old Goubuli steamed bun brand was delisted from the National Equities Exchange, triggering similar discussions on the public’s declining appetite for China’s “time-honored brands,” or laozihao(老字号), and whether these venerable businesses can continue to stay relevant.

Originating in the 1990s, the term laozihao refers to businesses that were established in or before 1956 and are widely recognized for offering unique products, techniques, or services. “Lao [‘old’] indicates massive expertise and experience,” Bi Guocai, president of Daoxiangcun, a Beijing pastry and snack brand established in 1895, declared in an industrial forum in 2019.

Back in 1956, when China was concluding its effort to nationalize private businesses via private-public partnership, Chairman Mao Zedong emphasized, “We shall revive the good things of our nation…Wangmazi, Donglaishun, and Quanjude shall be preserved forever,” naming a scissor brand, hot pot restaurant, and roast duck restaurant that dated back several decades or centuries.

Laozihao were designated in various industries and fields, including food, retail, manufacturing, and traditional Chinese medicine (TCM). Founded in 1651, the Beijing-based Wangmazi Scissors was one of China’s top scissor and knife brands. Shoe brand Neiliansheng, hat brand Ma Juyuan, and silk brand Ruifuxiang were all established in the 19th century, and were once status symbols for officials and the rich in the capital during the Qing dynasty (1616 – 1911). Beijing’s 351-year-old Tong Ren Tang and Guangzhou’s 420-year-old Chen Li Ji are renowned TCM enterprises. 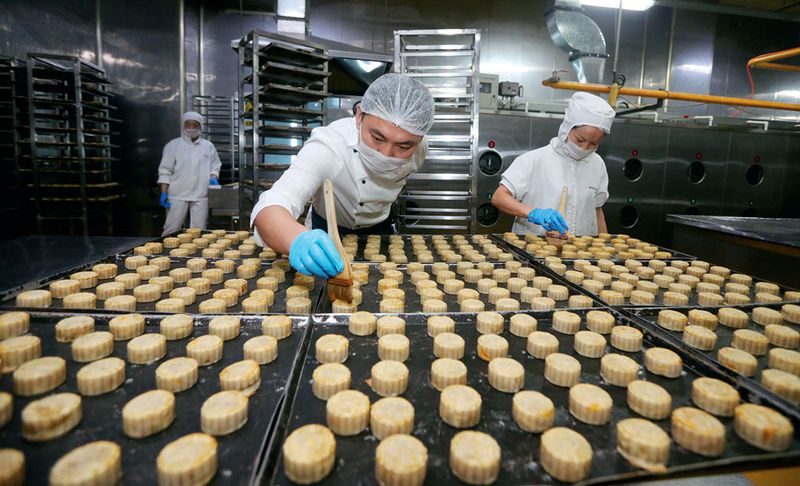 Many laozihao have survived hundreds of years by offering unique products

It was estimated that there were about 16,000 laozihao after the founding of the PRC, but many disappeared in the following decades. As nationalization in the 1950s brought those traditionally family-run businesses under state funding and management, some smaller brands were phased out, reorganized, or merged into bigger enterprises; some more were classed as “feudal” and “capitalist” and shut down during the Cultural Revolution. Many managers and practitioners of traditional crafts that made their brands’ reputation left these enterprises during those times.

Since reform and opening up in 1978, even the surviving brands have been facing tough times, as these largely state-owned enterprises of a formerly planned economy now need to compete with foreign and domestic brands with more advanced technologies and market savvy.

“Leather shoes and sneakers mass produced by machinery have squeezed traditional businesses that make cotton shoes by hand,” Cheng Xu, deputy general manager of shoemaker Neiliansheng, tells TWOC. The brand, founded in 1853, is best known for its “thousand-layered” handmade shoes. “Neiliansheng lost its way for a period of time, and tried machine-making leather and other shoes, but couldn’t compete with similar factories in Guangdong and Zhejiang provinces,” he recalls.

In the 1990s, the Ministry of Internal Trade (now part of the Ministry of Commerce) issued plates and certificates stating “China Time-Honored Brand (中华老字号)” to around only 1,600 businesses. The total number of laozihao fell to 1,128 by 2011, as many brands remained only in name without any production in the intervening decades. The surviving companies date back about 140 years on average, and more than 60 percent of them are engaged in pharmaceuticals, food, and catering. 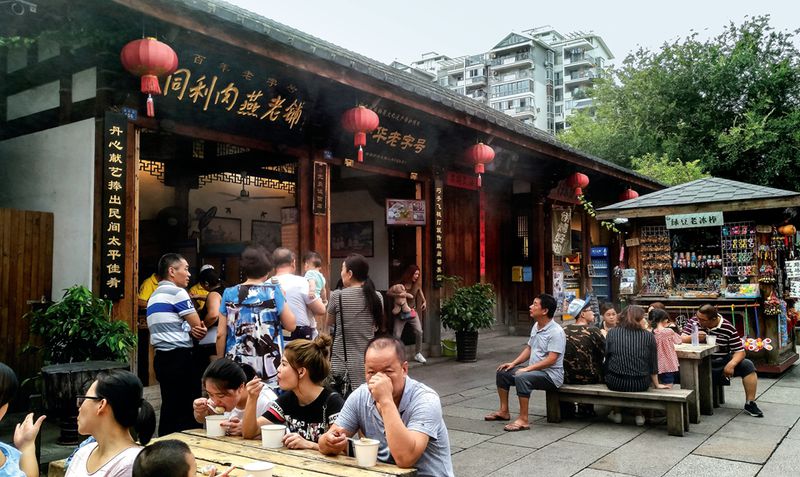 Today’s laozihao have an average age of 140 years

Some are continuing to grow: Bai Sensen, deputy general manager of Beijing Huatian Catering, attributes the average double-digit growth of its brands over the last few years mainly to the company’s efforts to pass on traditional techniques and a “common-people oriented philosophy.” Huatian manages 29 brands, including 20 national laozihao and 23 Beijing municipal laozihao, such as Qingfeng Baozi (a steamed bun chain patronized by President Xi Jinping in 2013) and Hongbinglou Restaurant. “Huatian has employed a ‘group apprentice’ system, where experienced chefs provide two-year courses to chef candidates,” Bai tells TWOC.

Since 2006, Chinese authorities have taken measures to revitalize time-honored brands and preserve the traditional culture they represent. A recommendation jointly issued by the MOC and 13 other governmental agencies in 2008 proposed to offer laozihao government funding, protect their intellectual property, maintain their original location (if it still exists) and decorations, among many other favorable policies.

Laozihao still exert a powerful cultural influence. “You can’t visit a place without trying its most famous food, so I went to Quanjude in Beijing,” Zhu Yujiao, a 33-year-old from Nantong, Jiangsu province, recalls from her trip to the capital four years ago.

She tells TWOC she trusts laozihao because their reputations have stood the test of time. “In the old days, people really put their heart into making a product; they cared about brand reputation,” she argues. 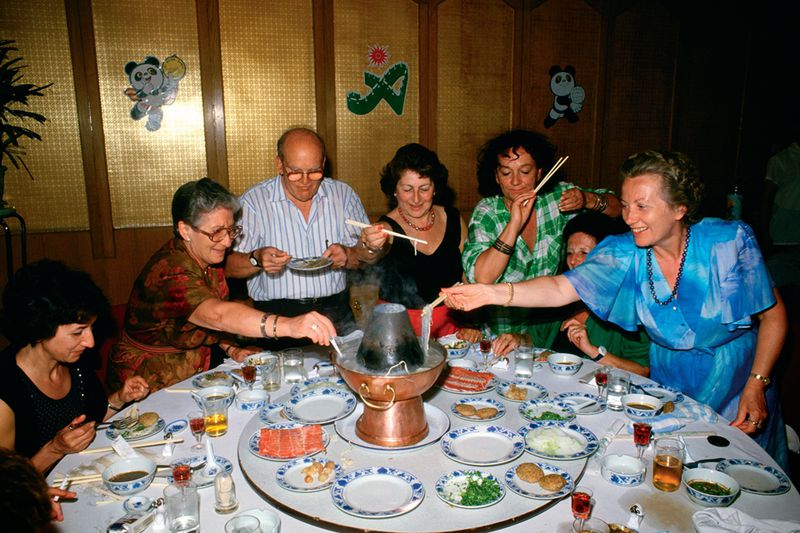 Yang Yueming, professor at the Beijing Institute of Culture Innovation and Communication, agrees. Laozihao have “high added emotional value as collective memory and even a symbol of the place of their origin,” she tells TWOC. Quanjude’s hang-roasting technique was allegedly adapted from imperial kitchens, and its original mottos called for using plump and tender duck meat and thoughtful service. Likewise, Goubuli’s buns were said to be praised by the Empress Dowager Cixi, and their modern fame surged in 2000 when a “crosstalk” comedy skit described them as “Thin wrappers with 18 folds and rich filling, like a flower.”

In Quanjude’s heyday around the turn of the century, “the Qianmen store alone had an annual turnover of over 100 million RMB. During the National Day holiday in October, customers queued at the door from 10 in the morning to 11 in the evening,” Zhou Yanlong, the company’s general manager, told Outlook Weekly magazine this July. Some diners and tourists would also buy pre-packaged duck at Quanjude’s stores to bring back to family and friends.

Yet no brand can survive on nostalgia alone. Over the last three years, the number of Quanjude’s customers fell from 8 million to 6.6 million. In the last decade, Goubuli has closed a dozen hotels and restaurants in Beijing, leaving only one restaurant in the capital, which is now struggling under the Covid-19 pandemic. Researcher Ju Jinwen estimated to the 21st Century Business Herald that only 10 percent of registered laozihao time-honored brands have seen robust growth, while 50 percent are struggling or running up debts, and the rest just barely break even. 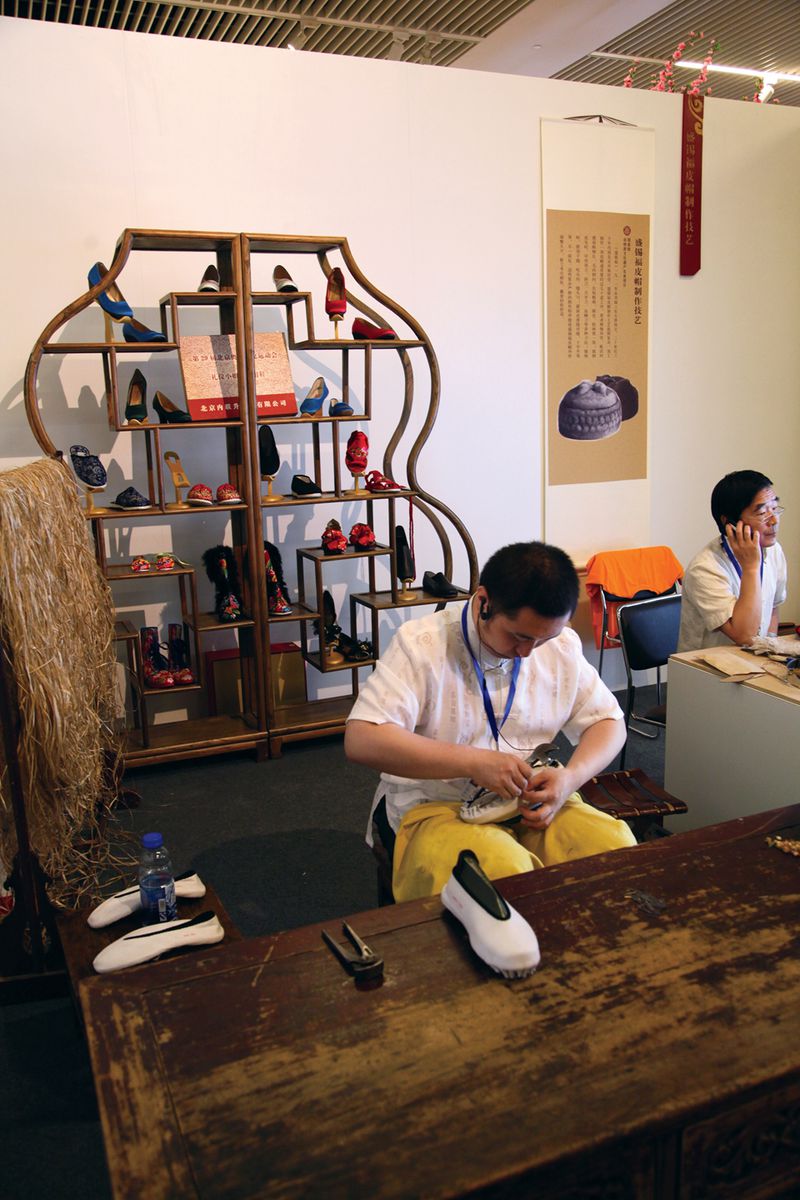 As consumers’ dining and shopping option expand, laozihao are no longer the arbiter of quality and class. Instead, many are stereotyped as being outdated and tacky. On the question-and-answer platform Zhihu, a user posted a long list of “famous” restaurants and tourist sites that locals never visit, including Quanjude, Goubuli, and Changsha’s centuries-old Huogongdian (“Fire Palace”) snacks shops. Zhang Yinghan, a college sophomore who grew up in Beijing, tells TWOC that her family would consider going to Quanjude only when out-of-town relatives or friends insist. It’s estimated that there were 120,000 roast duck restaurants in China as of last year.

“The declining laozihao have commonly coasted on their past glories without updating their products and services, especially the state-owned enterprises, and failed to adapt to new marketing modes in the internet era,” Professor Yang observes.

Fake products and cheap copies have also thinned people’s trust of laozihao, Yang tells TWOC. Several years ago, authorities discovered that 70 to 80 percent of the Chinese ink tagged Yidege, a major ink painting and calligraphy brand established in 1865, were fake.

Neiliansheng has spent over a decade in lawsuits against company called “Fuliansheng,” which has registered over 30 trademarks similar to the shoe company’s own. “We’ve spent over 1 million RMB on the lawsuits, but the compensation we win hardly cover the legal costs, let alone the cost of time, manpower and losses incurred on our brand’s reputation,” Cheng tells TWOC.

“Basically, laozihao’s development depends on whether they can catch up with the times,” says Yang. On review platform Meituan-Dianping, a go-to resource for millennials, none of Quanjude’s stores are listed among the top 10 most popular and most highly rated roast duck restaurants in Beijing. 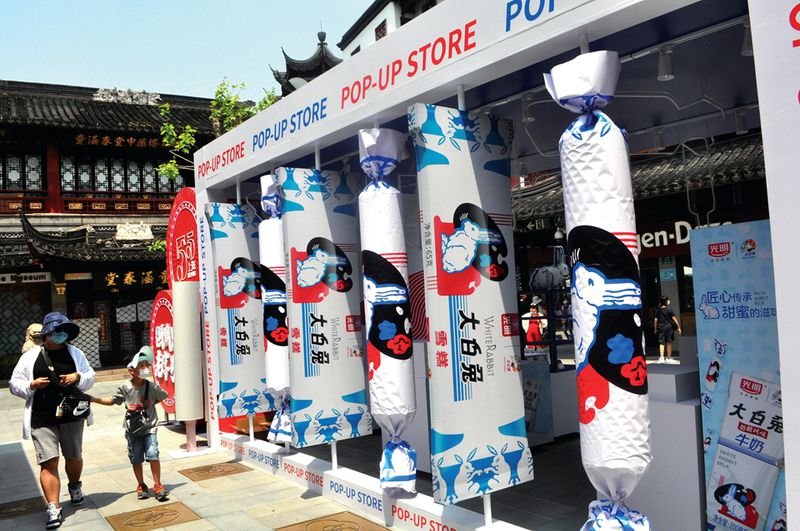 Brands Siji Minfu and Da Dong occupy the top spots, though both were established in the current century and charge higher prices than Quanjude—200 RMB to 400 RMB per person per meal, compared to 150 RMB at Quanjude. Reviews cite Da Dong’s stylish decoration, exquisite taste, and thoughtful service as selling points: “Perfect for banquets, anniversaries, and other big days,” one customer commented.

Over the last decade, Dianping, social media platforms such as Weibo and Xiaohongshu, and video apps like Douyin (TikTok) have created wanghong (网红, “internet celebrity”) shops popular with young consumers born in the 1990s and 2000s, typically by offering new products and gimmicks for them to try—and show off on social media after. “The decoration, products, or services are new to me, and seemed quite interesting,” says Zhang, recalling her trips to wanghong businesses such as one restaurant that sent food to the table with a revolving slide and another that had live ducks running down the table.

Many laozihao have tried to launch wanghong products on their own or in cooperation with other brands, popular online novels, games, or shows. Last May, when 60-year-old candy brand White Rabbit opened its first beverage shop with the Happy Lemon milk tea brand in Shanghai, some customers queued for hours for their tea, according to The Paper. The brand has also created White Rabbit-themed lipsticks, perfume, clothes, and tote bags.

According to Cheng, Neiliansheng’s online sales now account for half of its revenue. “The number of customers aged below 45 increased from about 50 percent in 2013 to over 70 percent this year,” he crows, crediting the brand’s cooperation with professional design colleges, well-known IPs, and fashion brands.

Zhu, the 33-year-old from Nantong, tells TWOC that she bought a White Rabbit bag and folder out of nostalgia, but rated the taste of its ice cream and milk tea as just “ordinary.” “Many new products of laozihao are developed based on fads, but do not involve [the brand’s] expertise or differentiate themselves from similar products,” she complains.

Yang, though, encourages such experiments in today’s “economy of attention,” provided that laozihao can back them up with better brand value. Popularity, after all, is fleeting—but a truly great product never gets old.

“Test of Time”is a story from our issue, “Disaster Warning”. To read the entire issue, become a subscriber and receive the full magazine. Alternatively, you can purchase the digital version from the iTunes Store.

Tags:
COMPETITION FACED BY LAOZIHAO DEFINITION OF LAOZIHAO DEVELOPMENT OF LAOZIHAO AFTER THE FOUNDING OF THE PRC TIME-HONORED BRAND BRAND OWNERSHIP
SHARE: