Dim sum may be the most famous feature of Cantonese cuisine. Taken with tea, as a street snack, or part of a banquet, its most famous varieties—shrimp dumpling, steamed siu mai, cha siu bao, and egg tart—are known as the “Four Heavenly Kings.” Less internationally known, but just as authentic, is 炸两, literally “fry two .”

The name is both explicit and misleading. It is indeed made up of two different foods—changfen (肠粉, rice-noodle roll) and youtiao (油条, deep-fried dough stick). Both are common Chinese snacks, though only the latter is fried.

In Chinese, changfen literally means “intestine noodles,” but has nothing to do with internal organs. Its origin can be traced back to the Tang dynasty in Luoding, Guangdong province, then known as Shuangzhou, where a famous Buddhist temple known as Longkan served steamed rice cakes for breakfast. These usually had four or five layers, each containing rich ingredients like minced peanuts, scallions, and chopped Chinese chives. One year, a severe drought hit the city, resulting in serious crop failure and food scarcity. The Longkan Temple decided to provide rice cakes to all citizens. To feed as many as possible, the monks added water to the ground rice before steaming, which made the cakes much thinner, like pancakes. Surprisingly, they still tasted good. The monks rolled up those translucent wrappers, cut them in pieces, and distributed them to the starving people. To thank the monks, locals named the snack “Longkan rice cakes.”

The notion of “intestine noodles” didn’t emerge until the Qing dynasty, when Emperor Qianlong (乾隆皇帝), a well-known foodie, came to Luoding. Upon tasting the famous Longkan rice cake, Qianlong commented: “Its texture feels like pig intestine; why don’t we just call it ‘intestine noodle?’” One doesn’t argue with emperors, so that’s how changfen got its strange name. 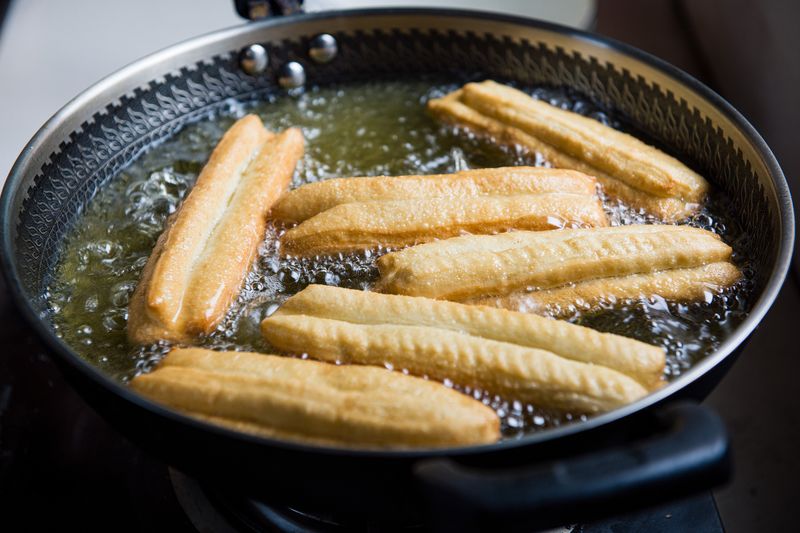 Youtiao, a long, golden-brown fried strip of dough, is a staple of Chinese breakfast cuisine, usually served slightly salted along with soy milk or congee. In Cantonese, youtiao is called “oil-fried devil” (油炸鬼). Writer Eileen Chang recorded the folklore that youtiao emerged in the 12th century during the war between the Southern Song and Jin armies, when Song chancellor Qin Hui collaborated with the enemy and framed loyal general Yue Fei for treason.

After Yue’s death, a street vendor from the imperial capital Lin’an, today’s Hangzhou, vented his anger and grief by frying dough to resemble Qin and his wife. “People of that time hated the treacherous prime minister Qin Hui,” wrote Chang, “so called the fried dough stick ‘oil-fried Hui,’” which sounded similar to “oil-fried devil.” Locals enjoyed a vicarious revenge on the Qin couple by deep-frying, tearing apart, and eating their doughy avatars. Gradually, the shape was simplified into today’s two sticks joined in the middle, but the name has stayed the same.

Until the War of Resistance Against Japan began in 1931, there was no connection between the two snacks. But in 1940, when Guangzhou was occupied by the Japanese army, the city experienced food shortages. In order to make the best use of edible stores, a teahouse called the Lotus-Chewing Immortal House (嚼荷仙馆) had an idea: They wrapped leftover youtiao with the soft, steamed changfen, and cut them into pieces. Thus, customers could eat two items at once for the same price. That was the origin of today’s “fry two.” After it was invented, the snack soon spread to Hong Kong, where it’s still very popular today. So, next time you drop by a Cantonese teahouse, skip the fancy dim sum and try the humble fry two, a dish invented in poverty but still enjoyed in prosperity.

Twice as Nice is a story from our issue, “The Noughty Nineties.” To read the entire issue, become a subscriber and receive the full magazine. Alternatively, you can purchase the digital version from the App Store.