Photo Credit: A Plus Film

Ms. Wu started every morning of her two-day vacation in Prague with 4 a.m. wake-up calls. Before noon, Wu and her husband had held hands on the Charles Bridge, sat with swans by the Vltava River, and kissed on the Prague Castle grounds. In their rented white gown and tuxedo, they smiled again and again for bemused tourists— and two professional photographers hired to document every moment.

Around 11 a.m., Wu’s regimen was forced to pause for the midday light and growing crowds, before resuming from late afternoon to sundown (which is as late as 9 p.m. in some areas of Europe during summer). The schedule left the Sichuan native with little time for sightseeing or relaxation, but Wu has no regrets. “I liked the background of red-roofed houses,” she tells TWOC. “It’s what we wanted for our wedding photos.”

An authentic Bohemian background doesn’t come cheap for newlyweds like Wu, who asked only to be identified by her surname (and declined to state exactly how much she paid for her entourage.) A search of listings on Taobao reveals prices from 20,000 to 100,000 RMB for “wedding gown travel photography,” or hunsha lüpai (婚纱旅拍), in Prague. The Czech capital is one of the top destinations for such photo shoots on the Pinterest-like social media platform, Little Red Book. Wu and her husband met up with their Chinese photographers and makeup artist locally, but some couples pay more to bring along their own photographer or videographer on a custom multi-city itinerary. Others splurge on an all-inclusive tour: transportation, hotel, costume rental, language assistance, and a local guide.

Destination photoshoots may be one reason that China’s wedding photography market is still growing at a steady rate of 1-2 percent per year, although marriage rates have declined since 2013. By 2023, the industry is expected to be worth 63.7 billion RMB—even though, by then, it’s estimated only 60 percent as many marriages will take place as compared to a decade ago.

It’s not clear when or how lüpai became trendy, but its rise is definitely recent. A common explanation cites Taiwanese pop singer Jay Chou, whose wedding photos from Prague in 2014 led, anecdotally, to an increase in white-clad early risers posing on the Charles Bridge. Guangzhou-based photographer Liu Xiaoying agrees, recalling that when she and her husband started their studio, A Plus Film, in 2014, destination shoots were uncommon. To attract business, they called up wedding planning companies and slashed their fees.

Today, though, the two photographers spend an average 180 days a year abroad, flying to meet couples at a dozen iconic destinations, such as Paris, Prague, Cinque Terre, Iceland, Bali, and Turkey. The latter is this year’s new hot lüpai country, according to Liu. “It’s the most popular location on Little Red Book; it’s considered mysterious and exotic, compared to some parts of Europe where lots of people have gone,” she says. “Lüpai is definitely about trends and competition. People are influenced to go on them because their friends have been.”

Europe remains the quintessential lüpai destination, perhaps due to the unique history of wedding photography in China. In the 1930s, it was briefly in vogue for elite Shanghai brides in white gowns to photograph their Western-style church weddings, but during the Maoist era, the “fashion” turned to proletarian poses and plain garb. Newlyweds during the Cultural Revolution were most fond of being photographed with a different little red book: The Quotations of Chairman Mao.

By the time Western wedding elements returned in the 80s, they were stripped of religious ceremony and became consumerist symbols of China’s opening up. Portrait studios provided backdrops with churches and European architecture to reinforce the Western aesthetic. It was fashion for couples to display an enlarged wedding photo in their living room; thus, as Chinese homes increased in size and sophistication, photoshoots became more elaborate. 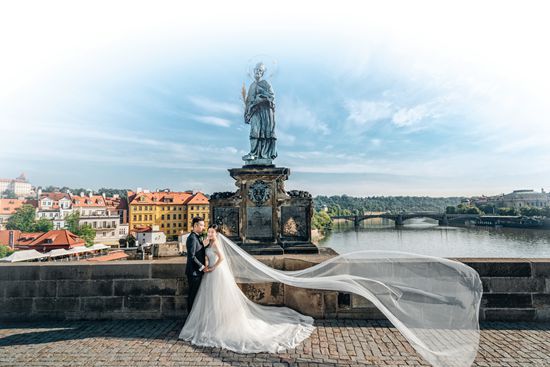 If the weather is uncooperative, an assistant manually fluffs the veil before the shot (A Plus Film)

Wu believes the recent vogue for destination wedding photography is generational. “Older people were used to taking photos in a studio, but my generation prefers more spontaneous shots and outdoor settings,” she says. Across China, these feelings have sent phalanxes of newlyweds to pose in former colonial concessions—Gulangyu Island in Xiamen, the Bund in Shanghai—and areas with imitation European architecture, such as Tianjin’s “Florence Town” housing district or the World Park in Beijing.

But traditional Chinese architecture has also grabbed newlyweds’ attention: In 2015, the Imperial Ancestral Temple outside the Forbidden City even began charging 800 RMB for wedding shoots on its premises, claiming the fee is to compensate for the inconvenience caused to other visitors.

Opinions about Chinese couples’ architectural tastes are divided. “As a person of Chinese blood…wedding photos in Japan, Europe, or the US feel too hackneyed; the person doesn’t match the scenery,” opined one newlywed, who opted to take photos at the Forbidden City, in a travel diary on Mafengwo.com. For others, it’s less about the nationality of the backdrop, than the authenticity. “The local color and enjoyment of travel are not things you can replicate,” says Liu.

The majority of Liu’s lüpai clients are those, like Wu, who have experiences of visiting or studying in foreign countries (which helps when applying for visas). “As the Chinese economy improves, the cost of traveling abroad is lowered, especially compared with traveling domestically,” she explains. Roundtrip airfare to Europe can be as low as 3,000 RMB, while flights within China sometimes exceed 2,000 RMB.

Then one has to consider the quality of the experience. “At many Chinese destinations, though it’s beautiful, the infrastructure isn’t there for a good tourism experience, compared to European countries,” Liu says. “There’s something emotionally fulfilling about visiting a developed country and seeing the world, seeing the diverse architecture and cultures, the locals congratulating you as they pass by—the clients get a lot of enjoyment.”

For Wu, a destination shoot was simply more interesting than going to a studio or a replica. “We get so few holidays in China, so we wanted to make ours special,” she says. “We want to be able to look back on our wedding photos later and recall memories.” Even she admits, though, that her photographic itinerary wasn’t conducive for soaking up the local color. “After Prague, we went to Austria for a few days. Just us, just sightseeing—no cameras.”

Gown Abroad is a story from our issue, “The Masculinity Issue.” To read the entire issue, become a subscriber and receive the full magazine. Alternatively, you can purchase the digital version from the App Store.