Dive4Love, officially known as the Dapeng Coral Conservation Volunteer Federation, is an NGO dedicated to conserving coral reefs in Shenzhen’s Dapeng Bay. Due to industrial pollution and the urbanization of the coastal area, the seas around China’s third-largest metropolis have seen their coral coverage plummet from 76 percent to 20 percent over the last 30 years.

Among the NGO’s 2,400 registered volunteers are amateur divers who go on undersea expeditions three times a month, putting their hobby to good use planting coral and cleaning up maritime trash. Diver “Morgan” Xia Jiaxiang, secretary-general of Dive4Love, spoke to TWOC about navigating this delicate ecosystem, and the challenges of drawing attention to a (literally) overlooked crisis in a nation with more than its share of environmental problems. 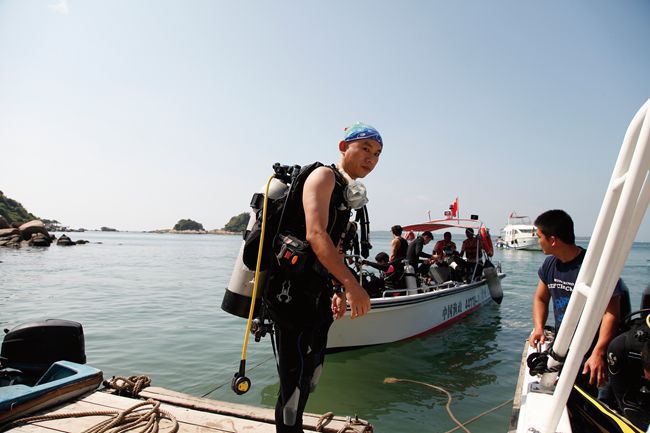 Xia prepares for a diving expedition

How did Dive4Love get started?

Xia: Dive4Love was founded in 2012 by a group of Chinese diving fans, who are accustomed to diving in beautiful seas teeming with coral reefs and fish around the world, including Thailand, Indonesia, and Malaysia; they were appalled by the maritime conditions on their own doorstep—even fish weighing over dozens of kilograms were barely seen. But according to local fishermen, there were sharks and abundant fish weighing over 100 kilograms back in the 1990s.

Why coral? Why is it important to save them?

Coral reefs are significant to the marine ecosystem—they are an “undersea rainforest.” Though accounting for less than 0.2 percent of the world’s marine area, they are habitat to a quarter of all marine life, and shelter infantile marine creatures from predators. They safeguard coasts from the impact of waves and tsunami, prevent erosion; and because they grow by carbon capture, they can help ease climate change. However, compared to environmental problems on land, such as sandstorms and smog, the degradation of undersea ecology is less well-known yet even more horrifying.

What’s required to restore this ecosystem?

Initially, our work consisted of sending divers to plant coral fragments in Dapeng Bay [and] restoring branches that have been broken off by typhoons or fishing nets. After years of doing this, however, we realized that simply planting coral would not reverse its degeneration, since human activity in the ocean is a major cause: In the 1970s and 80s, or earlier, no one was protecting the coral, but they grew quite well. Therefore, we’ve decided to also focus on raising awareness and changing people’s attitudes towards the sea through our “Dive4Love EDU” program, which delivers game-like lessons in maritime knowledge to primary school students and the public. The students are mostly local fishermen’s children, who are the closest-related to the sea. 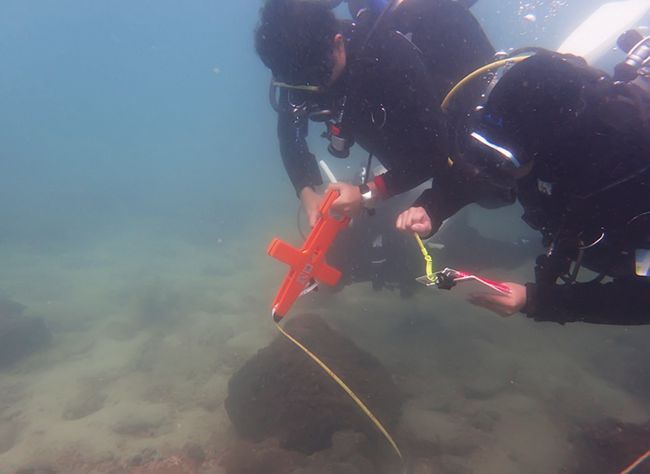 What are some issues that China faces with regard to maritime protection?

Our nation has generally known and cared little about seas and rivers. To most people, the sea only means beautiful seaside scenery, delicious seafood, and a convenient garbage dump. In 2017, Chinese actress Yuan Li wrote about a town in Yunnan province that was dumping trash into the Nujiang River, since the water will flush everything away. Most Chinese, including fishermen, try to exploit the sea as much as they can without any thought to maintaining its ecology. Only a small minority, like divers, can see the real conditions underwater.

That all sounds very frustrating. Are there any positive strides being made?

To date, we have planted over 5,700 corals and cleaned up 601 kilograms of trash from the sea, including over 1,000 meters of abandoned fishing nets. This year, we also hope to create a protected area for coral in Shenzhen, or at least an area restricted to boat traffic, in order to create a good environment for restoring coral.

What was the most memorable incident from your work?

In May 2015, a diver posted in his WeChat Moment photos of him holding two coral plants, which are a nationally protected species, and would have taken at least one decade to grow that size. It caused an uproar involving the public, media, and government agencies, and many people contacted me, asking him to be punished for “poaching” the coral. I was also angry, but I thought it’s fair to listen to the diver’s side, so I managed to get in touch with him. He told me that he did not poach the coral, but picked up coral that was already broken to show his friends who had never seen coral before [Editor’s note: Broken branches can still be replanted, and should not be removed from the sea floor]. In the end, he paid his fine at the local fishery administration willingly and recorded an apology on the radio, and joined Dive4Love together with a group of people from his hometown. It was this incident that really made me think about the effectiveness of public outreach.

All images by the NGO Dive4Love

Sea Changes is a story from our issue, “Funny Business.” To read the entire issue, become a subscriber and receive the full magazine. Alternatively, you can purchase the digital version from the App Store.