When a video of Americans thronging a Los Angeles bakery for “White Rabbit Candy” ice cream surfaced on Chinese social media in March, few paid attention to cries of copyright infringement by the Chinese manufacturer of the iconic candy the dessert was based on.

Instead, the top comments on Weibo asked “When can we get this in China?”—with the consensus being that Shanghai-based Guan Sheng Yuan (GSY) Group deserved what it got for failing to properly capitalize on the popularity of their treat. In fact, in 2015, a Liaoning ice-cream maker had similarly pooh-poohed GSY’s objections to its bestselling line of creamsicles, which aped the White Rabbit name and iconic tri-color packaging, insisting they cannot copy a product that doesn’t exist. “If White Rabbit Candy thinks it’s copyright infringement, they can take us to court,” the ice cream’s distributor crowed to the Beijing Youth Daily.

Since acquiring the White Rabbit brand in 1997, GSY had been slow to wake up to the cultural impact of the popular sweet until recently. To celebrate the candy’s 60th anniversary in February, official White Rabbit-brand gift boxes made an appearance at New York Fashion Week, and an exhibition of retro candy ads, photography, and licensed merchandize began touring China’s major cities, evoking the themes of childhood, family, and Chinese New Year that are intrinsically linked to the fortunes of the domestic candy market. 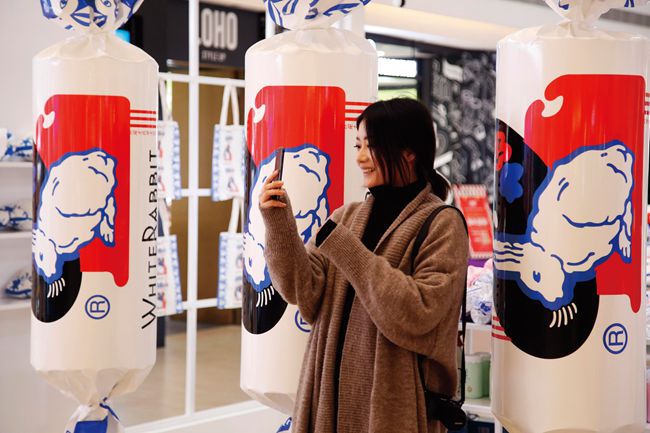 The earliest Chinese sweets were believed to have been made with malt sugar, with a passage in the 3,000-year-old Classic of Songs rhapsodizing the vegetables grown in the fertile Zhou dynasty soil as tasting “like malt.” Maltose was also behind one of China’s oldest candy-related rituals: The zao or guandong candy of the Kitchen God, whose cult had come into being by the third century CE. The Baopuzi, a Daoist scripture of that era, states that “on the night of the dark moon, the Kitchen God confesses the sins of people to the heavens,” giving rise to a custom where families left offerings of malt candy at this deity’s altar in order to sweeten his words (or stick his jaws together) before the Lunar New Year.

Cane sugar had arrived by the 4th century BCE, though it was initially processed into a syrup, and was not recorded in powdered form until the Eastern Han dynasty (25 – 220). This invention was responsible for another New Year delicacy, the candied fruit, and by the Tang dynasty (618 – 907), there were records describing workshops in today’s Sichuan which cooked the sugar itself into crystals to be consumed as a snack.

Handmade candy workshops continued to flourish into the Yuan dynasty (1206 – 1368), during which Marco Polo described the Khan as being particularly fond of candy from Longxi, today’s Fujian province. Emperors also had exclusive rights to another sugary delicacy—dragon’s beard candy, an allegedly 2,000-year-old treat made of hand-pulled strands of wispy maltose resembling its namesake.

During the Ming dynasty (1368 – 1644), China’s disparate candy-making traditions coalesced in the rise of the “prosperity box” (全盒), an octagonal dish containing watermelon seeds, dried fruits, and various sugary treats to be offered to guests who would visit the family each day of the festival. Each item in the box—from candied orange to candied water chestnut to candied wintermelon—was homophonous of a different type of plenty for the new year, most pertaining to riches and descendants. The sweet taste was supposed to herald happiness to come, hence the other use of sugary treats as a traditional wedding favor.

In the difficult early decades of the PRC, the New Year candy took on new significance as a rare treat in a time of deprivation, and generations grew up with memories of counting down to the only days of the year when they were allowed to eat sweets (aside from the occasional wedding). 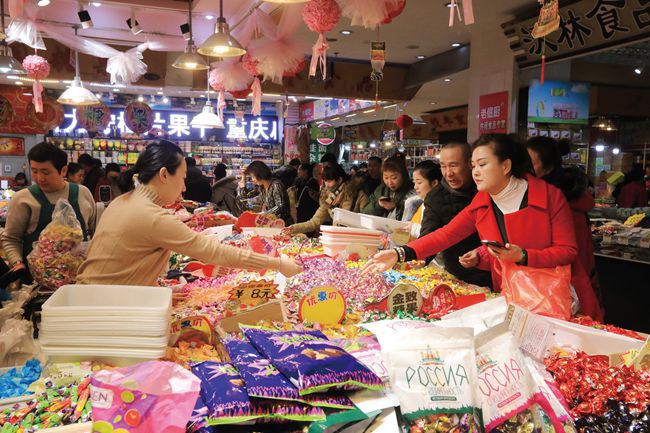 In 1959, Shanghai’s ABC Candy factory, which had been nationalized earlier in the decade, began rebranding its signature “milk candies” under the name White Rabbit to celebrate the 10th anniversary of the PRC’s founding. A toffee (supposedly based on a British recipe) made with imported milk powder and caramelized white sugar, White Rabbits were hand-made at the time, and standing in long lines was required to obtain a half-kilogram of the maximum 800 kilograms that the Shanghai factory could produce per day.

“Lots of people from out-of-province used connections to get the product in Shanghai,” Lu Xiuqin, an ex-worker, recalled to Shanghai’s Xinmin Evening News. “There wasn’t a single White Rabbit manufactured that wasn’t sold.” (The treat was also presented by Premier Zhou Enlai to US President Richard Nixon on the latter’s visit in 1972).

The 1960s saw a rise in the mechanized production of hard candies, or tangguo (糖果), based mostly around the Yangtze River Delta. “Every year, my mother would have colleagues who’d go on work trips to Shanghai, and everyone would ask them to bring candy back,” Liu Yijiang, a native of Nanchang in southeastern China’s Jiangxi province, who is in his 50s, tells TWOC. “We were envious of kids with relatives in Shanghai who could get these treats easily.”

Other popular candies in the pre-Reform era included salted plums, fruit-flavored tangguo and jellies, “sorghum” maltose jellies produced in Shandong, and “crispy candy”(酥心糖), featuring a flaky texture surrounding a hard center. These treats were sold by weight, with buyers often bringing up empty soy sauce containers to fill before the New Year—a task not usually entrusted to the children. “I would try to sneak the crispy candy meant for the guests, but I was always caught, because I would choke on the peanut dust coating it,” Liu recalls, laughing.

Branded candy saw a golden age after Deng Xiaoping’s southern tour in the early 90s, with the rise of brands like Jin Si Hou and Hsu Fu Chi, which manufactured chocolates and crispy candy respectively; the use of imported ingredients; and the arrival of Italian toffee-maker Alpenliebe in China in 1994. A growing trend in elaborate weddings also helped—according to Hsu Fu Chi, wedding candy accounted for as much as 70 percent of the domestic market in 2014.

Yet China’s candy consumption has never exceeded a tenth of the per-capita rate of developed countries, or a third the international average, according to the China National Food Industry Association. Moreover, the market has been contracting since 2015. While some suggest that Chinese simply have a traditional aversion for overly sweet foods, the  China Council for Brand Development blames candy manufacturers for not developing new products, instead producing the same festive treats year after year—and relying on cheap prices to compete in the bulk market, while losing to more recognizable foreign brands preferred by millennial newlyweds.

Today, White Rabbit appears the best hope for Chinese candy to produce an icon of its own. As the recipe and even the packaging have remained mostly unchanged over the decades it enjoys nostalgic value not only within China, but among the diaspora. Licensed products, ranging from limited edition White Rabbit lattes at Pacific Coffee in 2017 to White Rabbit lip balm in 2018, are popular; the latter sold out of all 920 pieces within 30 seconds of going online on GSY’s Tmall store.

Yet even White Rabbit seems to prefer symbolism over its actual product. Before the 60 Year Anniversary Exhibition’s recent opening in Guangzhou, GSY’s WeChat account published a preview featuring White Rabbit-themed pillows, pencil cases, tote bags, and rabbit toys in claw machines; seemingly the only pictures missing were of the candy itself.

Sweet Memories is a story from our issue, “Funny Business.” To read the entire issue, become a subscriber and receive the full magazine. Alternatively, you can purchase the digital version from the App Store.