Globally, the market in gluten-free foods is worth an estimated 17.59 billion USD as of 2018, but China seems to not have gotten the memo.

Not only are gluten-free options almost impossible to find the country’s restaurants and supermarkets, Chinese cuisine has a long history of cooking the wheat protein by itself as a main or side dish. The first documented evidence of wheat gluten in Chinese cuisine appeared in the 6th century, when the Qimin Yaoshu (《齐民要术》), an agricultural encyclopedia written in 535, referred to gluten as 馎饦, an ingredient in noodles.

Wheat gluten became known as miànjīn (面筋, “wheat tendon”) and began to be widely produced during the Yuan dynasty. During the Ming dynasty, Fang Yizhi’s handbook Physical Knowledge (《物理小识》) documented the common method of obtaining gluten by sifting wheat flour dough in water until everything but the protein has dissolved. By the Qing Dynasty, dishes based on mianjin had started to flourish.

Wheat gluten contains a high amount of protein and has a similar texture to meat when cooked, making it a popular meat substitute. Many dishes in vegetarian restaurants in China recreate traditionally meat-based dishes with mianjin, in addition to soy-based substitutes like tofu, but mianjin can also be eaten on its own in the following forms: 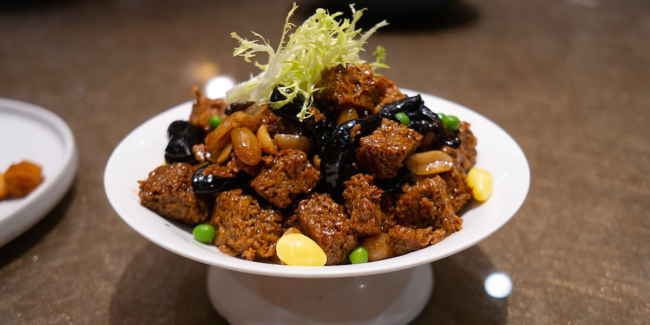 A must-have dish on family tables in Shanghai, kaofu has a texture and appearance similar to a sponge. It is made by leavening raw gluten before baking or steaming it. Often sold in blocks in Chinese markets, kaofu is usually cut into small cubes before being cooked. Its spongy texture helps to absorb the juices and flavor from other ingredients while cooking, creating a meat-like taste. Kaofu is often served as an appetizer or cold dish accompanied by peanuts or mushrooms, but Red-Braised Kaofu is a well-known hot dish. One can also usually find kaofu in liangpi (凉皮), cold noodles originating from Shaanxi. 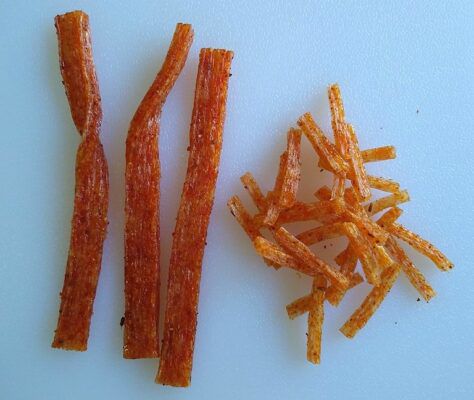 Allegedly invented in 1998 by peasants in a flood-stricken county in Hubei, latiao, literally “spicy strip,” is also known as “big mianjin” or “vegetarian beef jerky.” It is a cheap and popular snack that can easily be found in convenience stores and supermarkets, made from wheat gluten added with spicy oil and chili flakes. The snack’s elastic, chewy texture makes it ideal for long and boring train journeys, or a night of drinking beer. 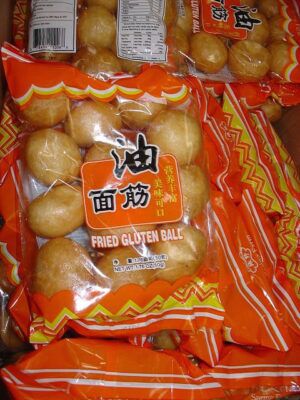 Yóu miànjīn, or oil-fried gluten balls, is raw gluten that has been cut into small pieces and then deep-fried into small puffy spheres. It has a history of more than 230 years, allegedly originating in the city Wuxi during the reign of the Qianlong Emperor of the Qing dynasty.  You mianjin can be braised or boiled in a savory soup, often as part of hot pot or malatang, but can also be stuffed with tofu or meat and served on its own in dishes like Gluten Meatballs (面筋肉丸) or Braised Gluten Balls (红烧油面筋). 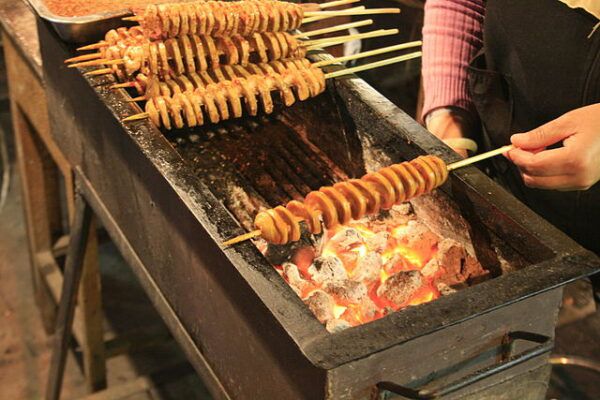 Kao mianjin, or roast gluten, is a sausage-shaped coil of wheat gluten grilled on a skewer. It is usually seasoned with barbecue sauce, chili powder, and cumin, and can be found at many barbecue restaurant or stalls as a cheaper alternative to meat skewers.