I detest the washing machine on the balcony. With each rotation, it would always make the sound of someone wiping their hand on a balloon, which would in turn make my head feel like it was going to explode. For that reason, I kept my washing to a minimum—when I was completely out of T-shirts to wear, I’d do a load.

However, that afternoon as it was running, it made a kind of raspy rhythmic “hoo-hoo” sound. My girlfriend kicked it, but soon, it was back to the usual squeaking.

When the cycle finished, my girlfriend opened the lid, only to find a bunch of clothing had been stained red. She yelled at me: “I’ve told you so many times not to put red clothes with other colors in the wash!” She started pulling items out of the washer and throwing them on the floor.

“Ah!” she suddenly screamed and ran into the bedroom, crying and hugging me tightly. I patted her trembling body and asked what was wrong. She pointed to the balcony: “There’s something in the washer…”

I walked out onto the balcony to a sad sight: The pigeon’s neck hadn’t fully separated from its body, and was wrapped up with the leg of a pair of jeans. The wings were broken, and drooped like two pieces of rag. The feathers that had fallen out had balled up into what looked like a gray sock with the thread unraveled; a large piece had been gouged out of the bird’s breast, revealing flesh that had been soaked white.

I immediately thought of something that had happened not long before.

On the rooftop of the building across from me, someone had been raising more than 100 pigeons. Two weeks ago, a few men wearing hard hats had shown up, carrying a power saw, a hammer, and a curved machete, and turned the empty pigeon coop into a pile of boards. The pigeons didn’t come near, flying in a circle over their heads as they watched their home being disassembled. Their owner didn’t bother looking on; a man in a suit gave him a stack of cash, which he busied himself counting.

I overheard the conversation between the owner and the suited man: a large international delegation was coming to town, and the city was eliminating all “eyesores.” The work had already been going on for a month, with old buildings repainted, external air conditioning units relocated in neat rows, new rubbish bins swapped in, and large rows of potted plants placed on the pavement. The only structures allowed to remain on rooftops were solar water heaters.

After that day, the pigeons would fly aimlessly about the city every day, and return to the rooftop at dusk to forage and defecate. When the sky grew darker, they’d disappear again.

“Who the fuck cares where it came from!” My girlfriend was losing it. All the clothes will have to be thrown out (which I thought was quite a pity). The washer will also have to be replaced (which the landlord would definitely not pay for)—if we could have replaced the balcony, she would have.

I went downstairs to throw away the bag of clothes with the wrapped-up bird inside, and saw The Bum.

I’d seen many vagrants before; The Bum was special. He had some of the classic characteristics of a hobo—disheveled hair and a dirty face, tattered clothing, not speaking to passersby. The Bum, however, never fished in the trash bins for food scraps. He was always in the same position: sitting on the steps at the intersection, drinking tea, smoking, and quietly watching the comings and goings of others. He drank his tea out of a big bowl half-filled with leaves that looked like they had been in there for days; he didn’t smoke other people’s cigarette butts, either. I’d seen him open a fresh pack himself—and they weren’t the cheapest kind.

When he was hungry, he’d pull out instant noodles from his bag, and go to a small nearby restaurant for some hot water. If he was rather bored (which was just my guess—I had no way to tell if he was bored or not), he’d start dancing and howling at the sky, like an angry leader admonishing subordinates, spittle flying in the air. I never understood a word he was saying. I wondered many times how he got his income, but never figured it out. He was always there first thing in the morning, and gone when it turned dark.

I hadn’t seen him for a number of days; the last time, a group of urban-management police were chasing him away. He cursed and spat at them angrily as he left, taking his possessions on his back.

I thought he wouldn’t come around again, or would at least wait until after the big international event had concluded. However, as I arrived downstairs I saw him sitting at the same corner. He’d cut his hair into a flat top, and shaved off his beard. I almost didn’t recognize him. I went over to the bin, and thought about how new our bloodstained clothes were, that it would be a waste to throw them away. A number of articles hadn’t even been stained by the blood; I could give them to him. This kind of charity was too indecorous, however, so I put the bag down a couple steps away from him, and ran back upstairs.

I watched him from my window. He looked around to confirm nobody was nearby, then opened the bag. He took out a few T-shirts and shorts, and held them up to his body, before stuffing them in his bag. He also quickly found the dead pigeon. He stopped looking, and picked it up. I called my girlfriend over to have a look. She was still afraid of the bird, and snapped at me: “Why would I want to see that? You’re nuts!”

He sat down and started to pull out the remaining feathers, like a poultry merchant. His movements were quick and skilled, and before long he had fully cleaned the bird. He went over to the bin and found some scrap paper which he lit on fire, and then took a thin metal pole and passed it through the pigeon to hold it over the fire. He turned it over and over as he fished out a pack of instant noodles from his bag; he took out the seasoning packet and spread it evenly over the surface of the bird.

I watched him eat the entire bird, innards and all, before I left the window. When I came back later, he had disappeared as usual.

The next day, as I went out to the secondhand electronics market to buy another washing machine, The Bum was there as usual. I saw one of my T-shirts on him—it was far too big, and the sleeves were gaping. I felt uncomfortable. I furrowed my brow as I walked past him. He suddenly spoke to me.

“Hey, you have any more?” He had an accent, and spoke haltingly.

I didn’t understand what he meant, and looked at him in confusion.

“Chickens…” He made a flapping motion with his arms.

“Oh, the pigeon. Nah, if you want more you can get some from the top of that building.”

“Of course, the coop’s demolished, nobody’s watching them.” I was in a hurry, and paid him no further heed.

When I came back, The Bum wasn’t there. The washer wouldn’t be delivered until the next day, so I threw the shirt I took off on a stool on the balcony. I turned around, and saw The Bum chasing pigeons on top of the roof of the opposite building.

Not just that, but he had carried his belongings up top. Over the next few days, he was always on that rooftop, drinking tea, smoking cigarettes, and checking out pedestrians down below. At night he’d roll out his blanket and lie on top of it. He’d used the boards from the pigeon coop to make a small shed that provided protection from the sun and rain. Occasionally, he’d go downstairs to get some hot water for his tea from the owner of the small restaurant. When I’d see him come back up, he’d have instant noodles in his hand; sometimes I’d see him roasting a pigeon, but I never saw how he caught them.

After a few days, the government learned of this new rooftop construction. A truck came into the compound, and a few men in uniforms jumped out, pointing to the rooftop and shouting as they ran up. The Bum had seen them before me; I was worried for him. He scrambled under a solar panel.

When the uniformed men got up, they were struck dumb by the sight of him. The Bum held onto the solar panel with one hand, and waved with the other. He planted one of his feet on the edge of the rooftop, and the other he kicked with wildly in the air. He unhurriedly said some things I couldn’t understand, but the message was clear: “If you come closer, I’ll jump.”

The men in the uniforms kept seven or eight paces from The Bum, one of them yelling things like: “We even evicted the pigeons, how could we have a person living here!”, “It’s dangerous up here, what if you fall?” and “Come down, we’ll arrange a place for you to live.” But The Bum didn’t quiet down. After a 30-minute stand-off, they left disappointed. Over the next few days, more people came by, but they couldn’t get him to move.

Yesterday, the 10-day countdown to the international event started. In the middle of the night, I was fast asleep when I heard a commotion. I looked out the window, but could only see the beams of flashlights swinging about. At first I heard the sounds of a quarrel, and then of wooden boards banging. Finally there was no more light, and I heard the sound of a truck starting downstairs.

When I woke up this morning, the rooftop was pristine. A flock of pigeons flew by.

Author’s Note: These two stories are part of my short story collection Last Night We Went Someplace Nice (first published on Douban), written from a rented apartment in Nanjing in 2014. At the time of writing, Nanjing was preparing to host the Youth Olympic Games. Many buildings in old neighborhoods were being repainted. My apartment building was covered with scaffolding; vagrants were expelled from time to time, and the pigeon coop on the building across from me was dismantled. I didn’t have a job at the time. What happened to these under-privileged people reminded me of my status as an “outsider”; I felt anxious and powerless. My solution was to write these stories in an attempt to rebel—rebel against what? It’s probably not that important anymore. 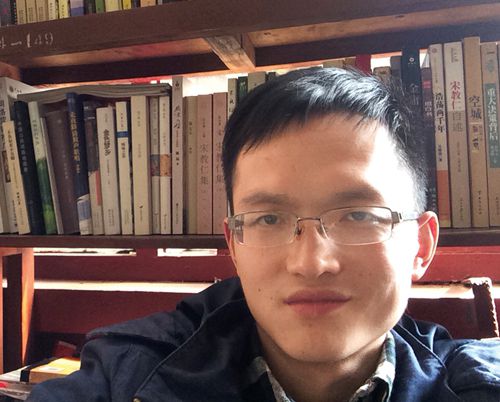 Journalist, entrepreneur, and screenwriter, Jiang Zijian describes himself as an “non-periodic floating person” who has lived in many cities. He currently resides in Changsha, Hunan province. He has published a short story collection on Douban, but mainly writes non-fiction.

The Pigeon and the Bum | Fiction is a story from our issue, “Vital Signs.” To read the entire issue, become a subscriber and receive the full magazine. Alternatively, you can purchase the digital version from the App Store.

Jiang Zijian is a contributing writer at The World of Chinese.